This is the new Kahn Design Flying Huntsman 6×6 Civillian Carrier, and it will take you and eight others just about anywhere you can imagine going.

The enormous nine-seat offroader starts life as a modest Land Rover Defender 110 before being stretched out to 5.1 metres in length and fitted with two additional wheels to make it the ultimate all-terrain SUV on the planet.

Priced from £249,995, every rich kid will want one – the only problem is finding a space big enough to park it. 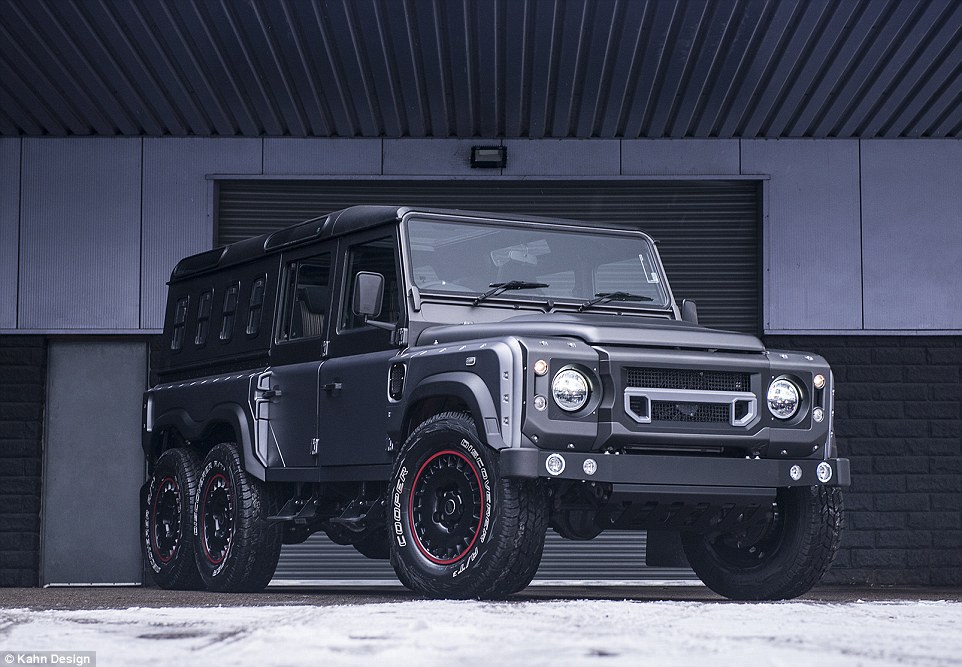 Six-wheeler: This is the new £250,000 Kahn Design Flying Huntsman 6×6 Civilian Carrier launched at the Geneva Motor Show on Tuesday

This is the first prototype made under the Chelsea Truck Company banner, which Kahn Design has committed to making for anyone who wants a massive six-wheeled brute.

And Mr Kahn has his sights set on a a variety of buyers.

In an official statement during the unveiling at the Geneva Motor Show on Tuesday, the car customising firm said it would ‘not look out of place with London, Chelsea or New York-centric drivers, rock climbers and off-roaders at the helm, nor would it look weary in battle as troops speed into combat’.

That is one broad spectrum of customers.

The unstoppable beast measures in at 5.1 metres long – almost an extra metre on the standard Defender and around the same as a Rolls-Royce Phantom – with a huge rear passenger deck sitting on top of the four wheels at the back of the SUV.

Fingers crossed it comes with reversing sensors, because this will not be an easy car to parallel park.

Powering it is a choice of a 170 horse-power 2.2-litre diesel engine capable of a maximum speed of 130mph or a gruntier 430 horse-power 6.2-litre V8 diesel – which will cost quite a bit extra but will be capable of towing anything from a caravan to a tank. 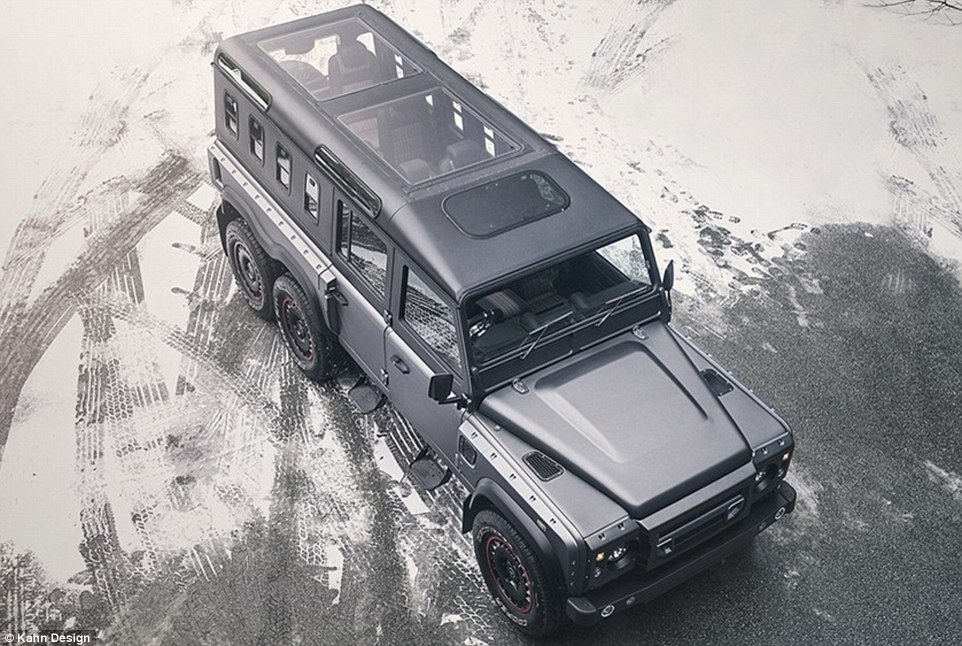 The Kahn Design creation will seat 9 people and there’s a split panoramic sunroof running the length of the 3.7 metre roof 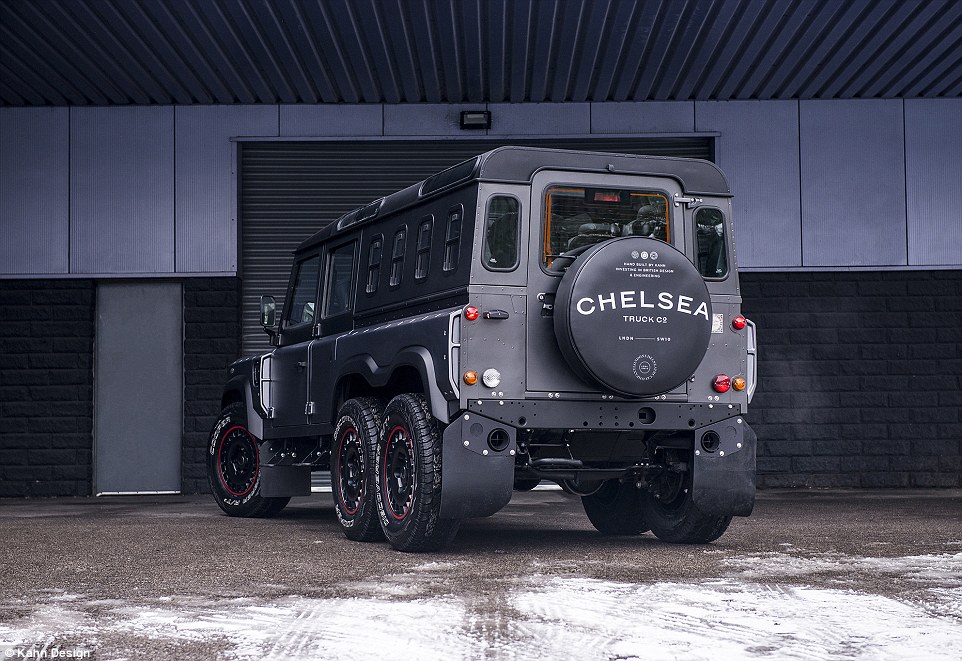 Power comes from a 2.2-litre 170bhp diesel engine, though high performance upgrades are available at a premium 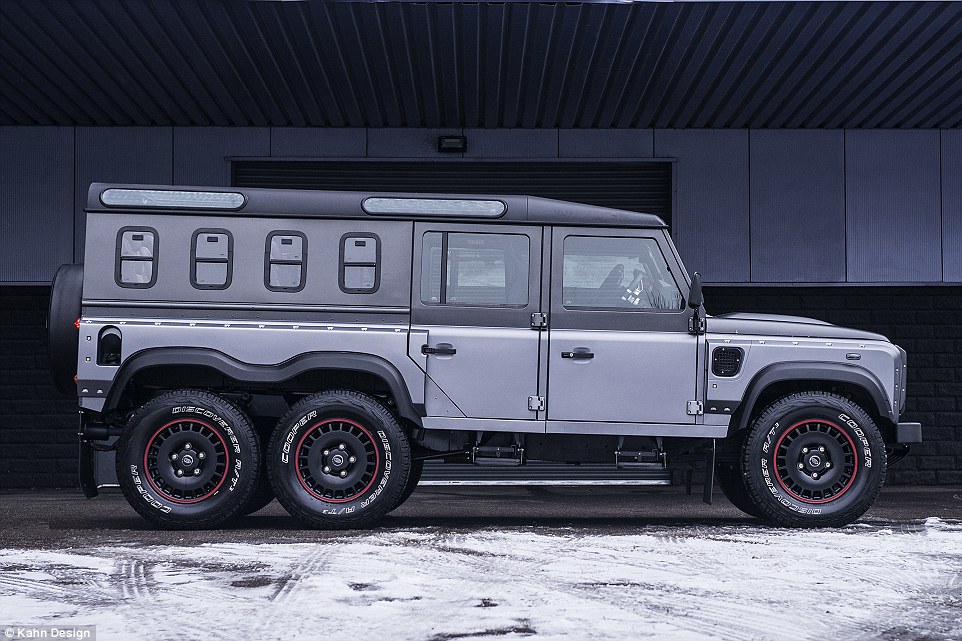 At 5.1 metres in length it is almost a metre stretched compared to the standard Land Rover Defender and measures in around the same as a Rolls-Royce Phantom limo

Power is sent to all six wheels with a hi-lo ration drive system and locking differentials. Translated into English, it means that no bog, dune or mountain face will be too difficult for this two-tonne hunk of metal.

That’s not to say it will be a completely utilitarian vehicle.

With a two, three, two, two seat layout, there’s more room than any MPV currently on the market, though space for rock-climbing ropes and Harrods shopping bags is limited by the number of people you carry.

It can also be ordered with a full panoramic roof that extends from the B pillars towards the rear and a plush interior with high quality fabrics and materials spanning from front to back. 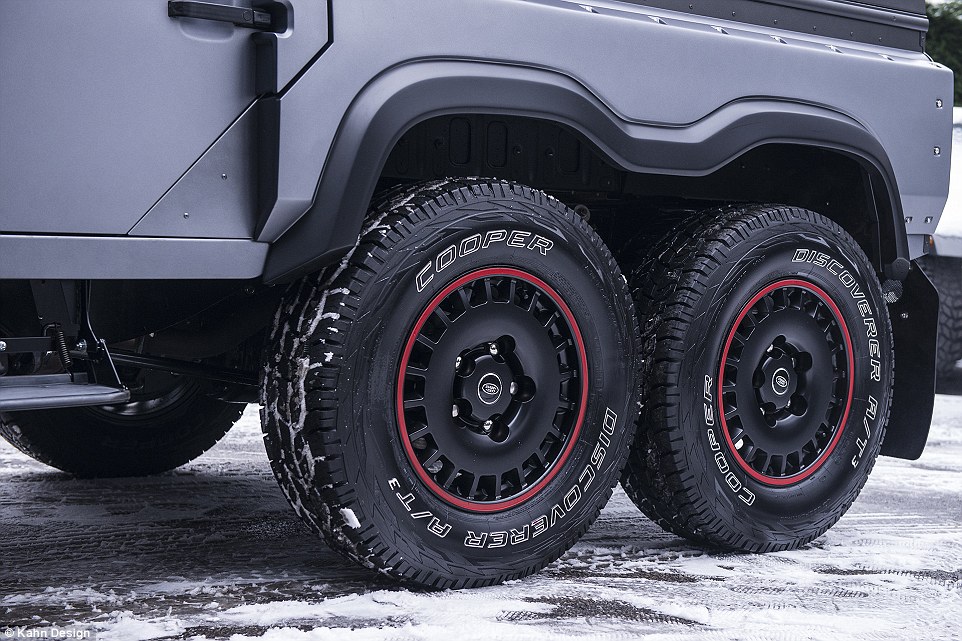 As part of the transformation, the team added a third axle, creating a two front-wheel and four back-wheel configuration with 18” Huntsman wheels coupled with Cooper LTZ 275/55/20 tyres 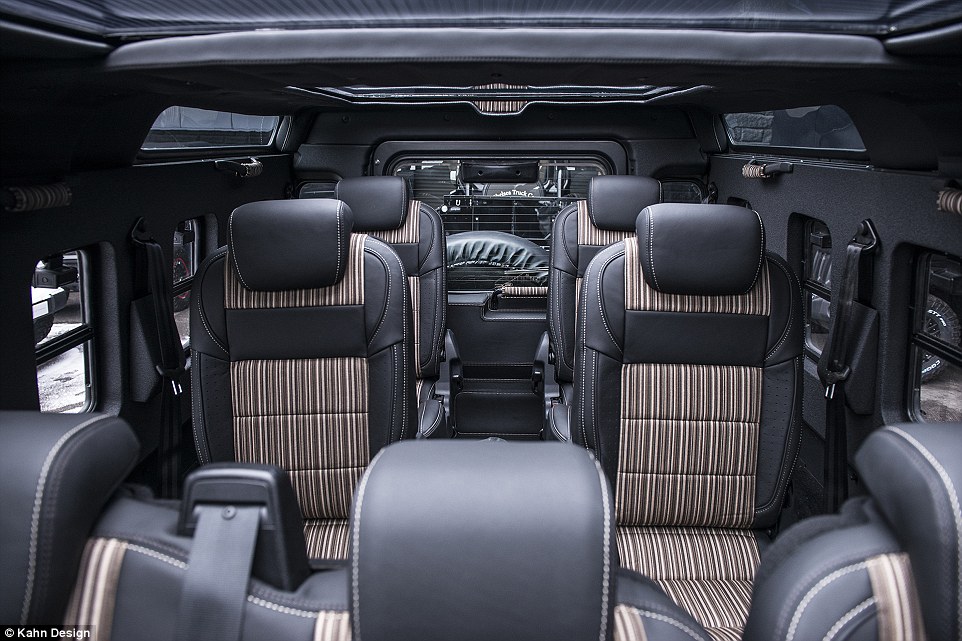 Inside, the layout is a 2-3-2-2 layout, making it bigger than just about any MPV on the market today From front to back, the SUV is finished in high quality materials so it won’t look out of place parked in a Chelsea mews

Afzal Kahn, chief executive of Kahn Design, said the coach-built vehicle will be snapped up quickly by discerning investors as well as collectors of all-purpose all-terrain monsters.

‘We are a fully independent British car company and it is an exciting time,’ he said.

‘The Civilian Carrier is a stunning six-wheel drive car, ideal for big families who enjoy spending time together in the great outdoors.

‘With extensive safety features and plenty of clever technology to make driving effortless, the Civilian Carrier could be the best choice for carrying family, friends and their luggage.’ 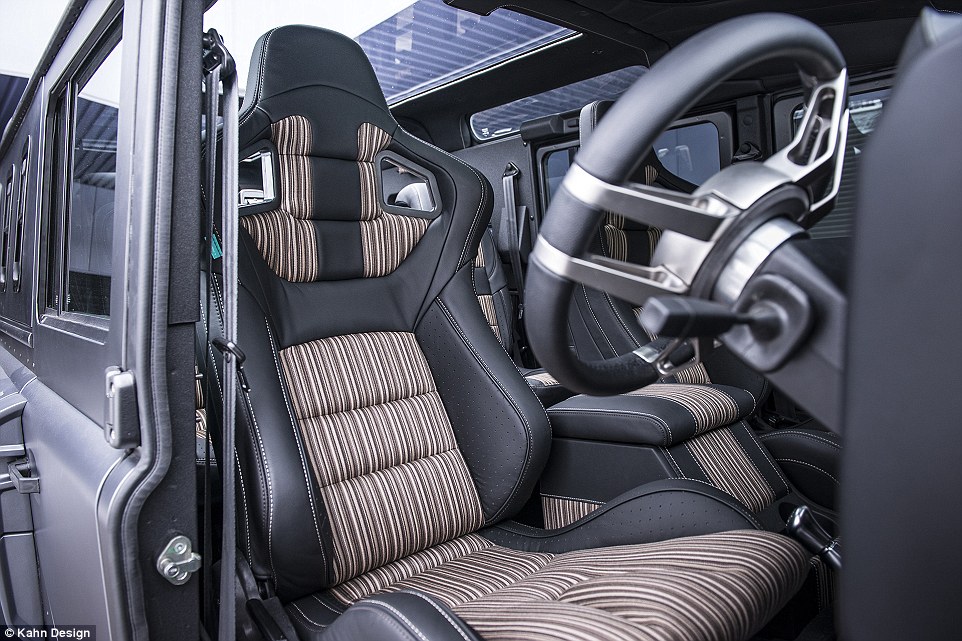 The front chairs are racier bucket-style seats, and each is finished in high grade leather and plush fabric materials 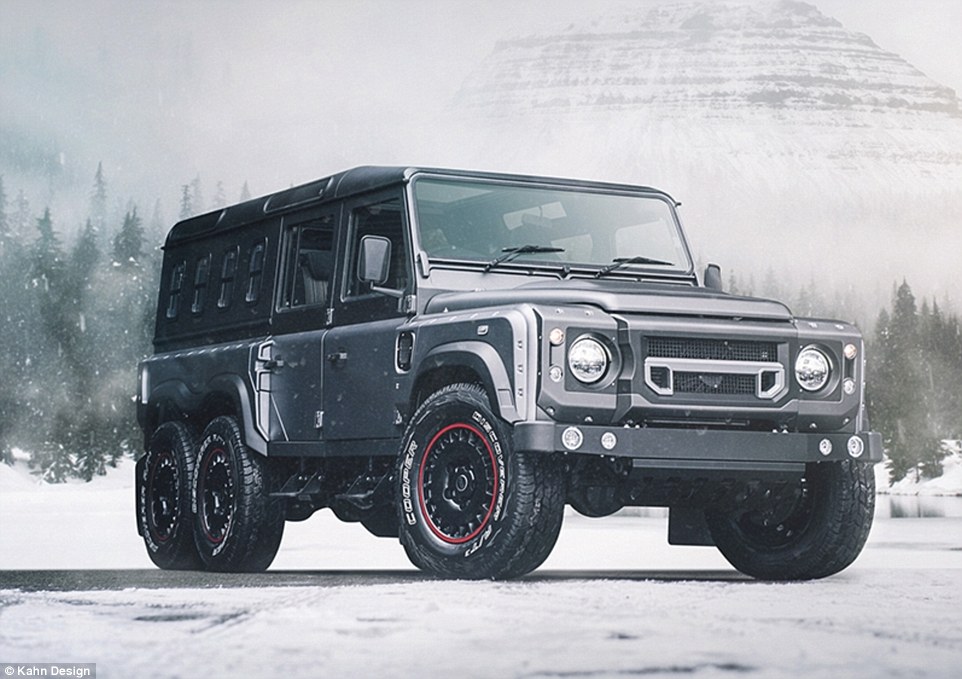 The Kahn Design Flying Huntsman 6×6 Civilian Carrier is completely road legal, but could go just about anywhere you want 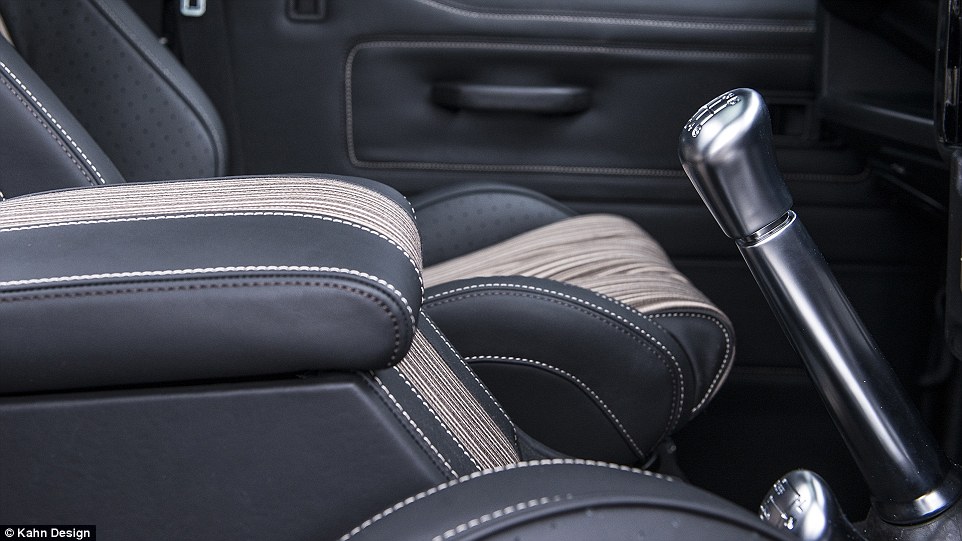 Afzal Kahn, chief executive of Kahn Design, said the coach-built vehicle is ‘ideal for big families who enjoy spending time together in the great outdoors’

Despite going out of production in January 2016, Mr Kahn said he still has a soft spot for the Defender – a model that was based on the military Series 1 Land Rover.

‘The Land Rover Defender is one of my top five favourite cars,’ he added.

‘There is something about it that makes you smile – it demands respect.’

This isn’t the first six-wheeler created by the British design firm. Last December it revealed a convertible Flying Huntsman that looks equally as impossible to park. 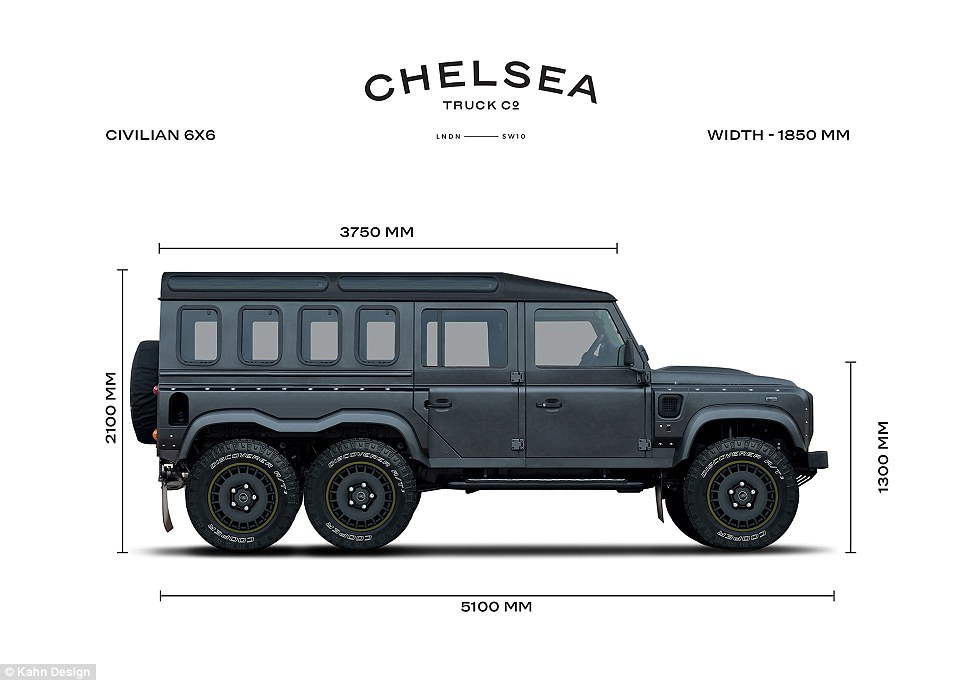 How hard will it be getting the Civilian Carrier 6×6 into a space? These measurements might help you realise