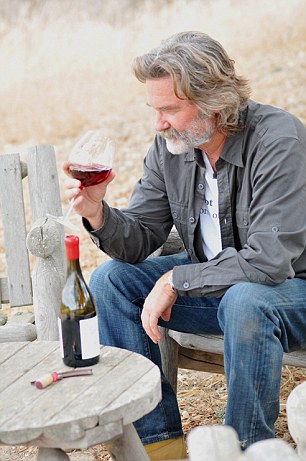 Hollywood star Kurt Russell has linked up with one of the world’s biggest drinks distributors to launch his boutique wine brand GoGi in some of America’s biggest cities.

The long-term partner of Goldie Hawn is the star of blockbusters including Tombstone, Tango & Cash and Escape From New York.

Now the 67-year-old has secured a deal with $16.5 billion US drinks titan Southern Glazer’s.

He set up GoGi Wines in 2008 after being seduced by the culture and lifestyle of winemaking on cycling trips through France.

He mused: ‘Cycling past picturesque vineyards provided the opportunity to sample many terrific wines. Though “sampling” might be an understatement, especially with Burgundian wines. They didn’t just steal my palate, they stole my heart.’

It sowed the seed in his mind of setting up his own wine label and GoGi was born.

‘We are available in high-end restaurants in California and Colorado right now because I have homes there and places I like to eat at. I have kept it very personal but this month we will be going out through Southern Glazer’s to other states – Arizona, Nevada, Texas, Florida and New York. It’s a new route to market and we have been very careful about how we do it,’ says Russell.

Southern Glazer’s is a titan of the drinks industry. It was founded in 1968 and was one of the first companies to have state-wide distribution in California. Now it distributes around 150m cases of wine and spirits to around 200,000 customers in 44 states.

They range from national retail chains to individual hotels, restaurants, bars and clubs. Russell says that this combination of specialism and scale is what attracted him.

‘They are a big distributor but they have a signature luxury wine division and basically it is what they do with their boutique wines and their family-owned winery wines. We were very impressed with their approach to them and even though they are big, they go about this in a very good way so we are looking forward very much to the partnership.’ 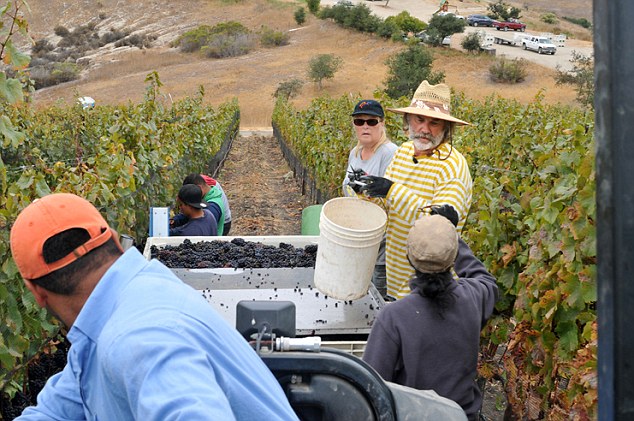 Hands on: Kurt has linked up with one of the world’s biggest drinks distributors to launch his boutique wine brand GoGi in some of America’s biggest cities

GoGi is based at Ampelos Cellars in California’s Santa Rita Hills which is owned by winemakers Peter and Rebecca Work. It produces a Chardonnay and Pinot Noir which range in price from $50 to $75. At the moment it is only available in around 100 upscale eateries including Mastros restaurants, the Roosevelt Hotel in Hollywood and celebrity chef Wolfgang Puck’s flagship Spago, in Beverly Hills.

GoGi can also be found in the top restaurants at Disney’s theme parks in California and Florida thanks to Russell’s close connections to the studio.

When he was just 13 he was personally signed up by legendary animator Walt Disney to star in the 1966 movie Follow Me, Boys! He was under contract for ten years and over the years starred in a total of 13 Disney movies, with the most recent one being last year’s sci-fi hit Guardians of the Galaxy Volume 2 which saw him playing a megalomaniacal living planet.

In contrast, after 50 years in the movie industry Russell doesn’t need to rely on wine for promotion or to make money. He is doing it out of passion so wanted his wine to be judged on its own merits which is why he chose not to put his name on it.

‘I had no interest in slapping my name on wine so I don’t have it on the bottles. From the beginning I wanted to separate myself from that celebrity pack and that’s why I make a high-end Pinot and Chardonnay. People really like it and we have earned our street cred and will continue to.’

Having a famous name isn’t a ticket to success in the wine business as former professional ice hockey player Wayne Gretzky found out. Gretzky is an ice hockey legend and after he retired in 1999 he launched a wine which Buzzfeed described as tasting of ‘candy and Coke’. 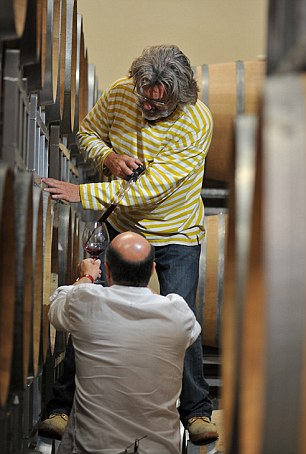 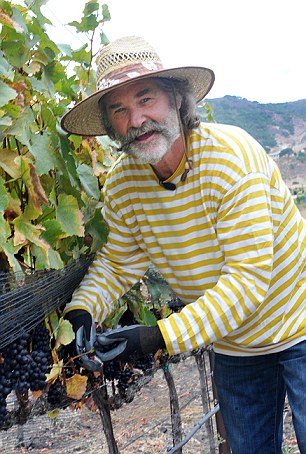 After 50 years in the movie industry Russell doesn’t need to rely on wine for promotion or to make money, he is doing it out of passion

Australian rockers AC/DC fared better by teaming with a vineyard in their home country which is famous for its wine. Even so, review website cheapwineratings said ‘it’s just OK. But, I guess, that’s OK. Because…you don’t buy a bottle of AC/DC Back in Black shiraz to serve with your filet mignon.’

In contrast, GoGi is aiming at a market which appreciates fine wine so using Russell’s name to sell bottles wouldn’t help to achieve that objective.

Russell says his first choice of name for the wine was inspired by movies. ‘I had a name in the back of my mind which came from a line that Val Kilmer had in Tombstone. His character was drunk and says “In Vino Veritas”. I said to Val “what does that mean?” and he said “in wine: truth.” I said “if I ever have a wine I’m going to call it Veritas, nobody will think of that. Well, there’s about 9,000 of them.”‘

He settled on GoGi which is the nickname his sisters gave him. Each vintage is named after one of his family members. The Jillybean and Bosty Boy Pinot Noir are named after his sister Jill and son Boston whilst the Goldie Chardonnay gets its name from Russell’s partner Hawn, who he first met on the set of 1968 Disney movie, The One and Only, Genuine, Original Family Band.

Many celebrities only go as far as picking a design for their personal wine labels but Russell says, ‘I have involved myself in every aspect of winemaking so far.’

He fizzes with enthusiasm about how he has chosen the grape types, picked them, blended them, labelled the bottles and even dipped the tops in wax to seal them. 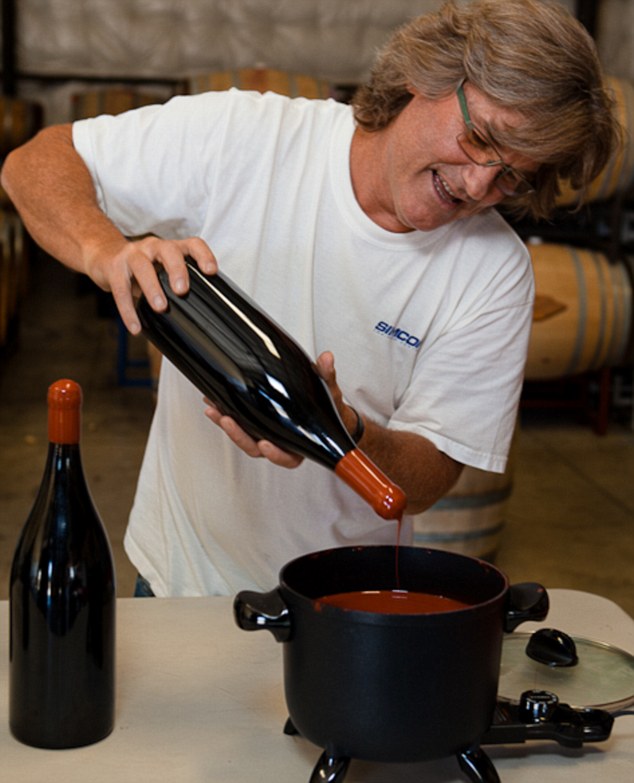 Kurt says he has involved himself in every aspect of winemaking so far. Above, he applies seals to the wine bottles

‘I didn’t relish the idea of selling wine but I relished the idea of learning how to make it,’ he says. Through a friend he was introduced to Ampelos and says he was instantly attracted to its approach.

‘During the early years when I was there they were becoming sustainable in practice which is a key ingredient if you want to make wines old school and old style. It is a clean way of making wine and it gives you the ability to create what I consider to be a much more Burgundian style.’

Russell adds that ‘Peter and Rebecca rarely go to the movies or watch TV so all they really knew about me was that I wanted to start making wine.’

Ampelos itself also produces its own wine from its vineyard and Russell says: ‘Peter’s wine and ours are very similar but they are very different too. We have different styles. We are using a lot of the same grapes but we do different blends, different barrels and grapes from different parts of the vineyard.

‘There is no formula and that came as a slap in the face and scared me. I loved what we did in the first year so it was a rude awakening in the second year to learn that it couldn’t be copied. As Rebecca told me, this isn’t Coca-Cola.’

After a decade in the business Russell concludes: ‘I have done every aspect of it so far and learning about wine will never end. You just jump in, you go and you learn. I think that is more fun than trying to learn it through some sort of book. It is on the job training.’