Building more homes is often claimed to be part of the answer to culling Britain’s high house prices, but new research reveals they would need to stop carrying a premium price.

The average price of a new-build home across England and Wales is now £338,694, and that is some 15.8 per cent higher than buying an existing property, the latest monthly house price index from LCPAca highlights today.

The persistent premium pricing of new-build homes comes despite widespread concerns over their quality and the scandal that led to a proposed government ban on new houses being sold as leasehold. 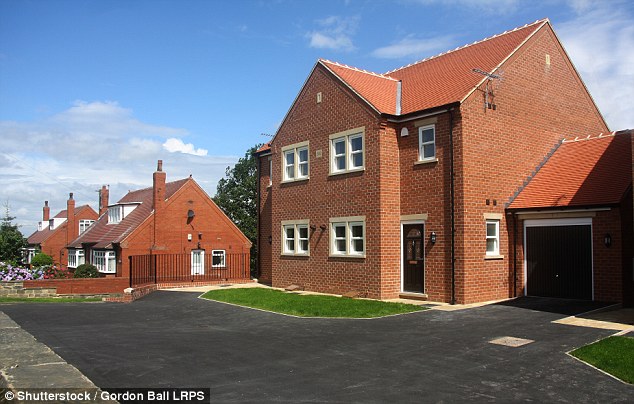 New-build homes are considerably more expensive than existing properties, despite concerns over their quality

It also reflects fears that Help-to-Buy loans are continuing to prop up high house prices by lending buyers of newly-built property up to 20 per cent of its value interest-free for five years.

Naomi Heaton, chief executive of LCP, said: ‘This does not paint an encouraging picture for the UK housing market as a whole.

‘It highlights that the Government’s attempts to increase transactions with help to buy schemes and Stamp Duty exemptions are not proving very effective.

While new-builds across England and Wales remain more expensive than existing homes, the market has seen a 2 per cent decline in prices in just three months and fall in annual sales of 1 per cent across the country, the data reveals.

More worryingly, quarterly transactions have plummeted 56 per cent, according to the London Central Portfolio index, which uses Land Registry data crunched by experts at Aca.

It explains that tracking new-build prices can be difficult, as Land Registry data for new homes lags six months behind. This is the time it takes to record new-build versus old stock sales completions.

In Greater London, quarterly new build prices have fallen by 3.5 per cent and represent just 15.6 per cent of all sales, compared with a peak of almost 20 per cent. 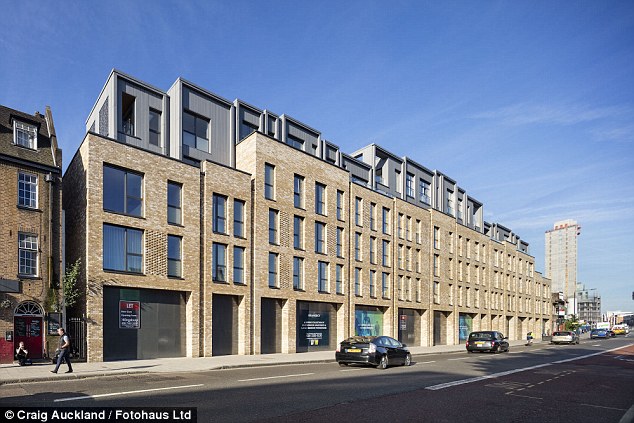 But in London, new-build homes tend to be cheaper than the average existing home.

The typical new-build property in prime central London, which includes Belgravia, Kensington, Knightsbridge and Notting Hill, is £1,950,952 – nearly six times the price of a new-build elsewhere in the country.

But that compares to £2,165,829 for existing stock. This highlights the gap in prime spots is not what is driving the overall picture elsewhere in England and Wales.

In Greater London, the average new-build price is now £641,711. These are homes outside the central area of the capital and here they are cheaper than existing properties, with the price comparing to an average of £625,052 for existing stock. 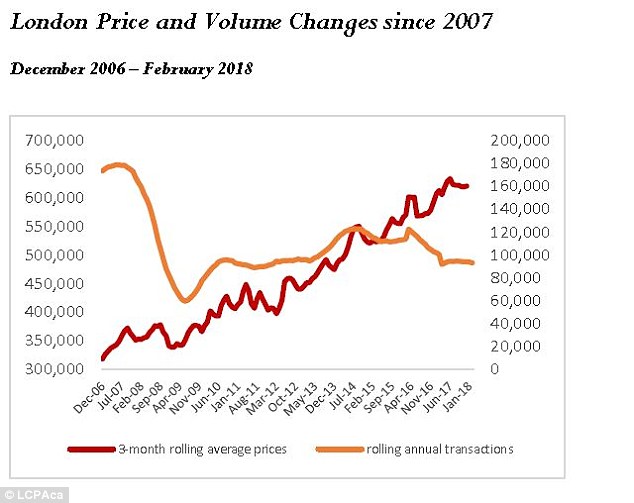 London’s steep house price rises since the financial crisis have stalled, the red line shows, while transactions, in orange, have taken a tumble 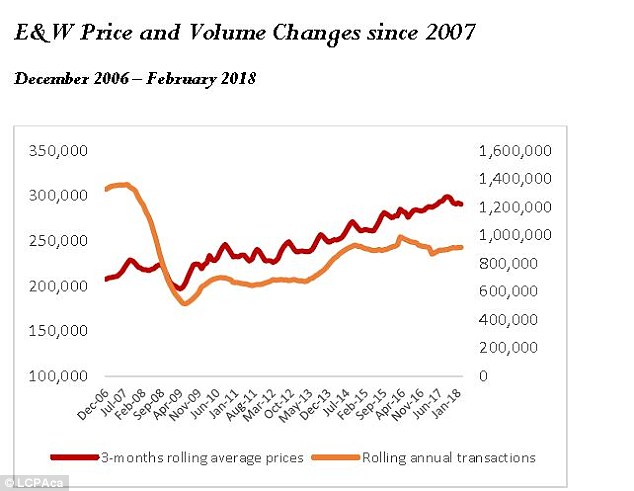 House price growth has been slower and steadier across England and Wales the red line shows, but is tailing off, while transactions are running below the pre-crash levels,m as the orange line shows

LCP says in its report: ‘The controversial new-build market has been most impacted by a downturn in international buyer sentiment and the sector continues to be volatile with quarterly and annual price falls.

‘As new-build sales completions often represent historic transactions, this situation could worsen over the next two to three years as new schemes, which may have failed to sell out at asking price due to reduced investor interest, come to completion.

‘However, after a fairly robust 2017, thus far, we may be seeing a significantly suppressed market.’

Across all properties in Greater London, annual price growth has fallen to 6.5 per cent, with growth in the last quarter standing at 2 per cent.

There has also been a significant drop in quarterly sales of 10.4 per cent, the largest fall since August 2016.

In prime central London, following a strong January, due to some exceptionally high value sales, prices fell back by 4.6 per cent in February, the report says.

Quarterly transactions dropped by 2.3 per cent and on an annual basis, transactions are down by 5.7 per cent, which although slump, nowhere near seen in the prime new-build market.

Ms Heaton said: ‘One would hope the closer we get to Brexit that there will be more certainty in the housing market and the UK’s place in the revamped global landscape.

‘LCP, however, do not see domestic homeowner sentiment changing significantly in the next year, particularly in the face of potential interest rate hikes.’

Should people cash in on homes to enjoy life or help their kids?

As a generation retires with more money in their houses than the bank, it’s no surprise that a fresh wave of retirement interest-only mortgages is on the cards.

Homeowners could have a more comfortable retirement, clear some debt, or hand the kids an early inheritance.

Is that a good idea or a recipe for disaster – and how did we even end up here? Listen to the This is Money podcast to find out