Lidl planning online delivery service in yet another assault on rivals

Lidl is planning an online delivery service in yet another assault against the UK’s biggest supermarket chains.

The German discounter has created a holding company with Companies House called Lidl Digital Logistics as it gears up to enter the grocery delivery market, the Mail can reveal.

Lidl chief executive Christian Hartnagel and chief financial officer Dirk Kahl have been registered as directors of the new company. 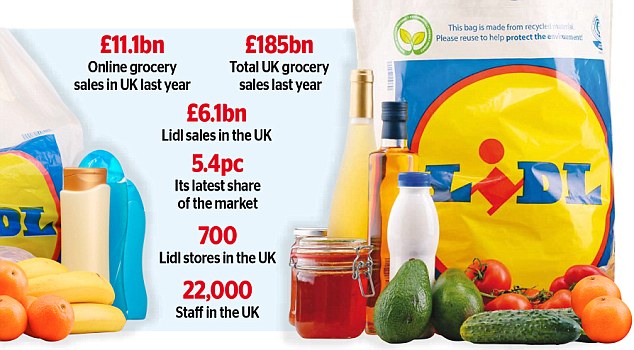 Lidl’s move represents the latest attack on the likes of Tesco and Sainsbury’s, which have thriving web businesses. And just this week, online grocer Ocado secured a tie-up with US supermarket giant Kroger.

Aldi’s German rival Aldi also has a delivery service where customers can buy wine and general merchandise such as clothing, children’s toys and DIY tools. Shoppers still have to go in store for fresh food, and its online offering is limited.

Although Lidl has 700 stores in the UK and pulled in revenues of £6.1bn last year, this is the first time it has expressed an interest in moving online.

The company filing comes as Sainsbury’s and Asda prepare to join forces to create a £14.1bn supermarket.

The competition regulator has begun its investigation into the merged company which would have 2,800 stores with combined revenues of £51bn. The grocery powerhouse is likely to be viewed as a major threat to rivals as it becomes the UK’s biggest supermarket.

Sainsbury’s and Asda have vowed to slash prices if the merger goes ahead.

Aldi and Lidl have already hit back and vowed to remain the cheapest option for shoppers.

But experts say Lidl needs to do more to protect its competitive advantage. Natalie Berg, retail analyst at NBK Retail, said supermarkets can no longer ignore the importance of having an online business.

‘Discounters like Lidl have traditionally shunned ecommerce because it was incompatible with their low-cost business model,’ she said. ‘Once you factored in the cost of picking, packing and delivering, there’s no way Lidl could have offered the same low prices you find in store.

‘However, the rise in third-party delivery services is opening doors for supermarkets, allowing them to cater to the growing demand for online grocery without the hefty investment in infrastructure or systems.’

Farida Gibbs, chief executive of technology consultancy Gibbs Hybrid, said: ‘Without technology, no business can create and deliver its products or services while engaging with customers efficiently.’ Marks & Spencer is trialling a delivery service with courier firm Gophr in Camden, north-west London, and Reading as a cheaper way of getting food and drink from stores to customers. A postcode finder on its website hints it could soon be ready to launch a larger roll out.

Lidl has soared in popularity with customers since it opened its first supermarket in Britain in 1994. The German firm traces its roots back to the 1930s when it started out as an independent grocery wholesaler.

It has been a hit with shoppers hunting for a bargain as an alternative to the Big Four of Tesco, Sainsbury’s, Asda and Morrisons. The growth of the budget supermarket chains, which account for more than one in eight sales, were one of the motivators for Sainsbury’s bid for Asda.

Last year Lidl revealed a £1.5bn expansion plan which will see it open 60 shops a year.

A spokesman for Lidl said last night: ‘We have a digital department already established within the business and, of course, online is something we’re looking at, but we have no immediate plans at the moment.’