Lloyds Bank is now recording all product applications in branch

Lloyds Bank has been accused by a branch staff member of behaving like Big Brother by recording conversations with all customers when they apply for products, This is Money can reveal.

The anonymous staff member, along with the BTU – an independent union for Lloyds Bank employees – have voiced concerns that it has been implemented to help bring in sales targets through the back door.

The move, which came into effect a few months ago, sees all personal banking assistants and mortgage and protection advisers making audio recordings interviews with customers. 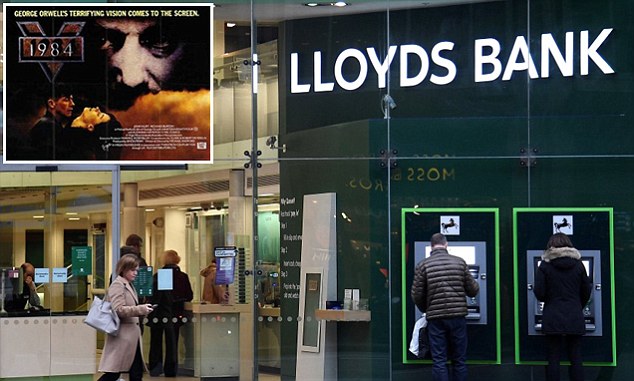 Big Brother: A staff member has accused Lloyds Bank of behaving like the 1984 character in its branches

Line managers can then review those recordings within an hour of the interview being completed.

The staff member told This is Money it is akin to George Orwell’s novel 1984 in which every citizen is under constant surveillance.

According to the BTU, the bank argues that recording interviews protects staff from customer complaints.

It comes in the aftermath of scandals such as Payment Protection Insurance mis-selling.

If Lloyds – or any other bank – had access to recorded conversations in a database, they could potentially prove products weren’t not ‘mis-sold’ if they had gone through the details.

But the BTU says: ‘There is a sneaking suspicion that under the guise of protecting customers and staff, the real reason for recording interviews is so that the bank can use the recordings as a forcing tool to ensure that personal banking advisers and mortgage advisers are behaving like sales staff but without the need for sales points and targets.’

This is Money has long investigated the sales pressure and tactics in banks across Britain. The majority of high street banks have binned them altogether.

Lloyds Banking Group itself was fined more than £28million in December 2013 by the FCA for failings in their controls over sales incentive schemes – it followed a year-long investigation by This is Money.

You can read the back catalogue here: Stop the hard sell!

The staff member that contacted This is Money says employees at its shrinking branch network are now on tenterhooks and conversations with customers have become robotic, as being recorded means staff are terrified of saying the wrong thing and stick to scripts.

He also adds that customers are asked whether they are happy to be recorded – and if they’re not, they can simply choose not to take out products with the bank.

It also means staff become directly accountable for what they have done, or not done, in the interviews.

The BTU argues that the recordings discriminate non-commercially profitable customers who could be ‘side-lined in the push for increased sales.’

It adds: ‘In morning “shouts” or “huddles” personal banking advisers and mortgage advisers have to say how they are going to make their customers “better off” and then at the end of the day they must explain what they did in their interviews.

‘If there is a mismatch between the two, then line managers can listen to the interviews to see what was said.’

One line manager told the BSU: ‘Despite not having any targets now and everything is supposedly to help customers “Diary Management” and “Diary Quality” is fiercely challenged.

‘I am often faced with going through every appointment in the diary and having to justify why it is in the diary if there is no obvious “sale” to be made.

‘I am made to feel sick to my stomach from the pressure to fill the diaries with “customer needs”. It is worse now than ever before when we had sales targets.

‘Branch visits often leave everyone in the branch feeling completely demotivated and failures at their jobs.’

Lloyds changed the terminology of its incentive scheme so that ‘sales’ were replaced with ‘customer needs met’ a few years ago.

A Lloyds Bank spokesman told This is Money it began piloting and introducing the recording of customer interviews in branch from mid-2017.

This started with mortgage interviews and it is now in the process of rolling it out to general banking interviews.

The introduction of interview recordings in branch, the bank says, will align its service to the same standard as its telephone banking.

It adds that customers benefit from a quality assurance perspective – by using the audio recording it can assess the interaction for training and/or monitoring purposes and ultimately allows it to improve the service.

Having a record of the interaction for future reference is also seen as beneficial by Lloyds as ‘recollection of the detailed interaction can get blurred over time’.

Furthermore, it says the move allows colleagues to demonstrate their ongoing competence through assessment of random real life interviews.

Lloyds says that customers can decline to proceed with the recorded interview.

In these instances, a customer will have the option to contact telephone banking or complete their request online – not open the product in branch. It claims 96 per cent of customers are comfortable their interviews were recorded.

It adds that it does not recognise or accept the claims made by BTU and says it’s not a recognised Union of the Group.

Lloyds Banking Group revealed a 23 per cent rise in half-year profits earlier in the month, despite taking a restructuring charge and a £550million hit from the PPI scandal.

It said underlying profit rose seven per cent to £4.2billion over the six months to June 30, while statutory pre-tax profits surged 23 per cent to £3.1billion.

But the banking giant said it set aside £550million to cover PPI mis-selling claims in the first half of the year, bringing its total bill for the scandal to £19.2billion.