Nipping into a bus lane to jump traffic jams might seem like a good idea, but motorists face fines of between £65 to £160 in the capital if they’re caught in the act.

According to a recent RAC report, a million bus-lane infringement fines are sent out each year, with some 994,000 issued in London alone between 2015 and 2017.

New data revealed this week has named the capital’s local councils that have been penalising the most drivers, based on figures from the previous financial year.

These are the areas you need to take particular care in case you accidentally – or intentionally – veer into a bus-only lane. 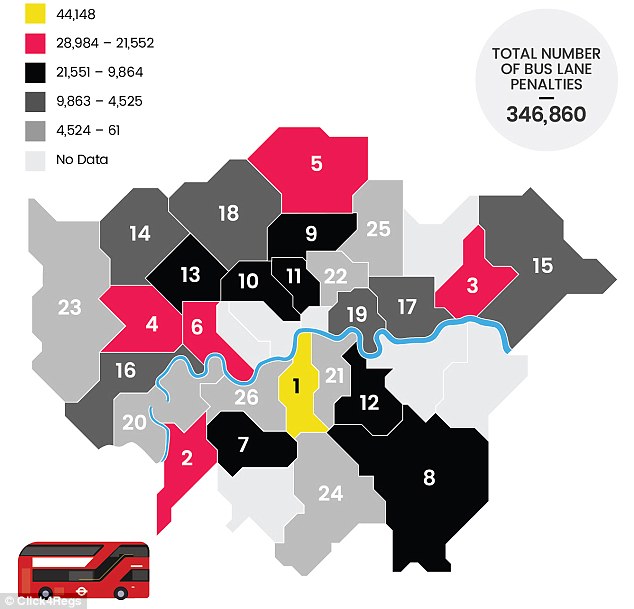 Bus lane blackspots in the capital: Or should it be yellow spot? The number one London location for the most bus lane infringement PCNs issued last year was Lamberth, new stats have revealed

That’s an increase of eight per cent compared to the previous year and the equivalent of 121 fines being handed out every day.

If all the PCNs were upheld, the council would have earned a minimum of £2.8million in bus lane penalties for the year.

Kingston upon Thames was next in the list, though it issued almost half as many bus lane tickets as Lambeth.

Some 28,984 PCNs were given to motorists for bus lane infringements within their borough – though that was a significant 17 per cent hike compared to the year before.

Coming in third place was Barking and Dagenham, with 28,618 penalty charge notices given by the council to those drivers who committed bus lane violations in the east London borough.

At the opposite end of the scale, Wandsworth council issued the lowest number of bus lane penalty charge notices in London, at just 61 over a 12 month period. 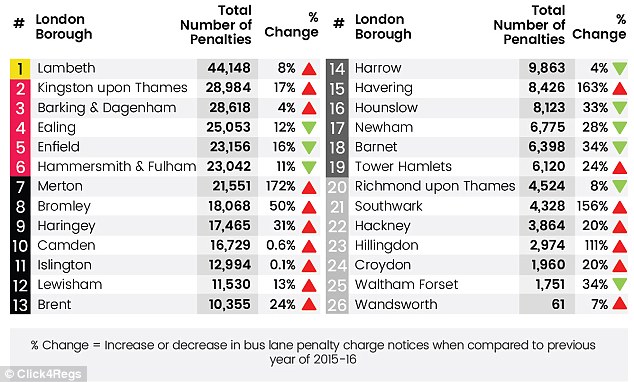 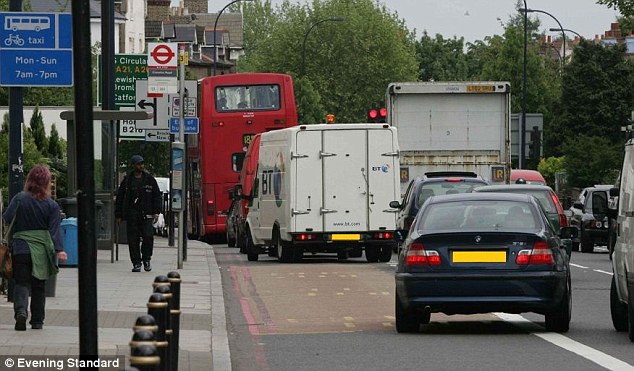 In total, that’s a minimum revenue of £22.5million for London borough authorities, based on 346,860 being issued and the lowest penalty being £65

Waltham Forest council’s 1,751 PCNs were few enough to be the second lowest of all London boroughs, having seen a 34 per cent decline in motorists using bus lanes during restricted hours.

That was the joint largest year-on-year decline, along with Barnet. 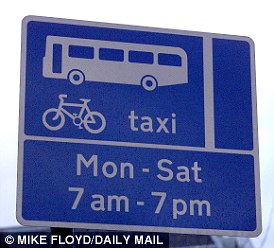 All bus lanes across London have blue signs indicating their times of operation.

Within these specified days and hours, unauthorised vehicles are strictly prohibited from using bus lanes, and if they do so, they face the risk of a penalty charge notice.

Drivers illegally using a bus lane between the restricted timings, could face a full penalty charge notice of either £65 (outside Greater London) or £160 (inside Greater London), if caught by roadside ANPR (Automatic Number Plate Recognition) cameras.

As for the most significant increase, PCNs for bus lane infringements were up 172 per cent in Merton (21,551), closely followed by a 163 per cent year-on-year increase in Havering (8,426).

In total, that’s a minimum revenue of £22.5million for London borough authorities.

Infringements for bus lanes run by Transport for London were not included in the research.

‘With driving in the capital already problematic, largely due to the heavy congestion, it seems many drivers are using the bus lane to jump queues and minimise delays to their own trips,’ she said.

‘Whilst many knowingly do so, there are those who are not aware of the infringements they are committing until being fined.

‘For such individuals, they should thoroughly educate themselves on bus lane rules, markings and signage.

‘Additionally, take careful consideration before following the lead of other vehicles into bus lanes.’