Lord Ashcroft bets £2.7m to make his wine sparkle after a hot summer paves the way for a bumper crop

Lord Ashcroft bets £2.7m to make his wine sparkle after a hot summer paves the way for a bumper crop 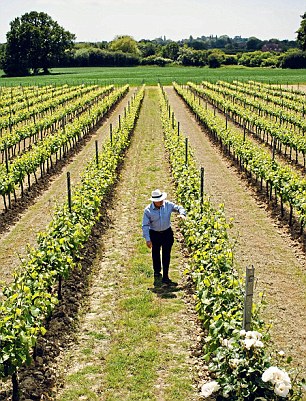 Lord Ashcroft has ploughed another £2.7 million into his English wine company after a vintage summer for growers in the UK.

The Tory billionaire controls 72 per cent of Gusbourne, which has vineyards in Kent and West Sussex.

The company, which is listed on Aim, London’s junior stock market, has raised a total of £7.4 million by issuing new shares and warrants to investors, with Lord Ashcroft the biggest single contributor.

Gusbourne says the money will go towards cultivating vineyards that have not yet matured, as well as increasing storage facilities for its wine.

Experts are predicting a bumper crop for English winemakers after the warmest summer in decades.

Growers have said the soaring temperatures created ‘near perfect’ conditions, in stark contrast to the spring frosts last year that damaged vines.

Gusbourne’s chief executive Charlie Holland said: ‘We now have an abundance of fruit on the vines, with the lovely weather we had in June and July leading to successful flowering and development of the vines.

‘We will have to wait until mid-September for the beginning of harvest before we have a true indication of the quality, but at this stage it looks very promising.’

Gusbourne raised £3.7 million by issuing new shares to investors, while the same amount will be issued in warrants.

Lord Ashcroft, 72, has subscribed for £2.7 million of shares, although £1 million of that is the company repaying a loan he gave it in May.

Gusbourne has 60 hectares of vines on the Gusbourne Estate near Ashford in Kent and another 30 hectares in West Sussex that are planted with Chardonnay, Pinot Noir and Pinot Meunier.

Last year, turnover jumped 56 per cent to about £1 million, with exports making up a quarter of sales, though the company remains loss-making.