One of the stand-out success stories of the past few years has been the stellar growth of Greggs.

With a genius for publicity and self-promotion, it is now the UK’s biggest baker. It has 1,900 shops and its value-for-money, comfort food pasties have become favourites with everyone from builders to bankers.

So when Roger Whiteside, Greggs chief executive, issues a profit warning for the rest of the year, triggering the shares to dive 15per cent, you know there is trouble ahead. 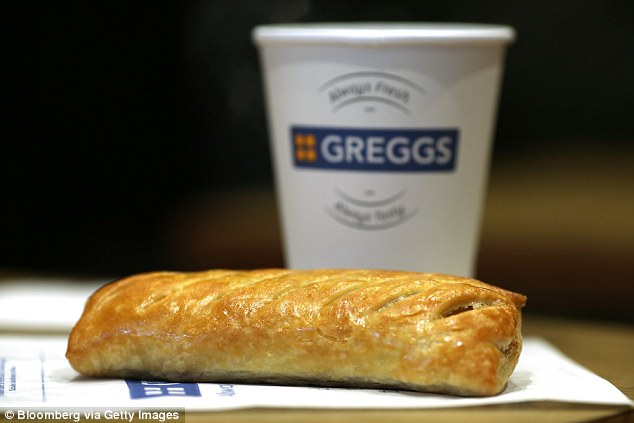 One of the stand-out success stories of the past few years has been the stellar growth of Greggs, says Maggie Pagano

Although sales have picked up again after a sharp fall in the first 18 weeks, he is still cautious about the rest of the year because of the fragility of consumer spending he sees first-hand.

There were specific reasons for the spring fall. The ‘Beast from the East’ snowstorms meant that drivers could not deliver to many shops, while others were closed. At the same time, customers couldn’t get to outlets, creating a perfect storm.

Whiteside warns that full-year results are likely to be flat, and unlikely to beat last year’s £81.8million, despite analysts’ forecasts which had been as high as £87.1million.

What was more interesting to see was that Greggs started the year well – sales were up by 3per cent in January and February. They are up again in May, but still below the start of the year, which rather suggests a more worrying slowdown in consumer spending. What’s more, customers are spending more – but there are fewer of them.

Tim Martin, boss of JD Wetherspoon, was another leading retailer with a more sober message. Sales at his pubs were up over the last three months but lower than for the same period last year, mainly because of the early May bank holiday. 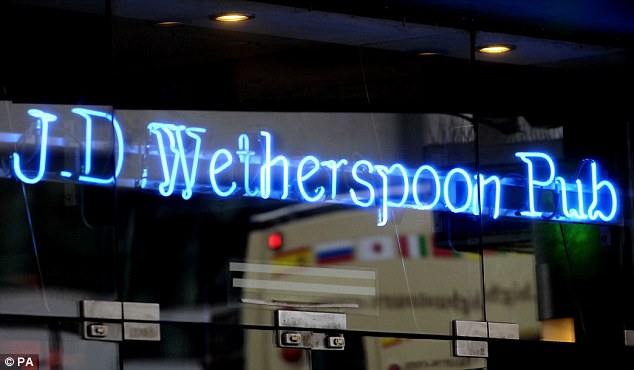 Tim Martin, boss of JD Wetherspoon, was another leading retailer with a more sober message. Sales at his pubs were up over the last three months but lower than for the same period last year, mainly because of the early May bank holiday

Martin also warns that the second half faces higher costs, from business rates to labour, as well as the sugar tax, so the full year will be ‘as expected’. That suggests about the same as last.

Ever the optimist, Martin, a leading Brexiteer, remains adamant that if only the UK would leave the customs union we could import non-EU food and drink at lower prices, pushing up living standards.

There was more bad news – UK retail sales in April fell off a cliff. The British Retail Consortium reports sales down 4.2per cent year-on-year in April, after a 1.4per cent per rise in March. While this reflected the unpredictable weather and early Easter, it’s still the biggest one-month fall since 2005.

Even if you take out seasonal distortions, there is no doubt consumers are tightening the purse strings. Quite sensibly, too.

The outlook is hardly inspiring, particularly with the sight of the Cabinet in total disarray over trying to solve the customs union puzzle (Martin should be invited into Cabinet meetings).

The more fragile outlook is why interest rates are likely to be kept on hold when the Bank of England’s monetary committee meets today to discuss rates. Never say never, and the BoE’s mood is always impossible to predict but, with wages no longer falling in real terms and inflation coming down, a rate rise would be counter-productive.

There are some, including Barclays economists, who argue there will be no rise for another two years for that very reason. The worst decision would be to raise rates and strangle what recovery there is at such a delicate time. 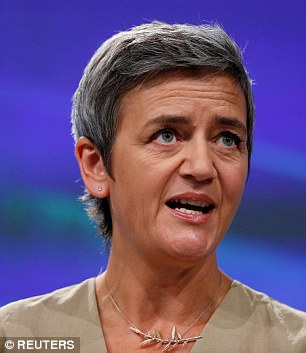 Margrethe Vestager is the EU’s competition commissioner who took on Google, Apple, Gazprom and Starbucks, and won

Margrethe Vestager is the EU’s competition commissioner who took on Google, Apple, Gazprom and Starbucks, and won.

The inspiration for lead star in the Borgen TV series now has a new challenge – whether to allow Vodafone to buy Unity Media, a German cable business along with other European assets, from Liberty Global.

If it goes through, in one swoop Vodafone becomes Germany’s second-biggest operator after Deutsche Telekom (DT), which controls two-thirds of telecom revenues.

You can see where this is going: DT’s Tim Hoettges loathes the deal, saying he will ‘fight for the fact that we will do everything for the customers not to be disadvantaged in the spirit of a fair competition’.

Vodafone’s Vittorio Colao claims ‘Tim’s mission is to protect and grow their market dominance. They are not pro-consumer, they are pro-DT.’

It’s an understatement to say there is no love lost between the two. But the power to decide lies with Vestager in Brussels.

If the deal is stopped, she will be accused of supporting narrow German self-interest. And the EU will lose any credibility it has for opening up markets to competition.