Oh dear, the Organisation for Economic Co-operation and Development is still being beastly over Brexit.

It may have raised its growth forecasts, but the Paris-based thinktank is warning the economy will be held back by business delaying investment because of Brexit uncertainties, and will weaken unless close ties to the EU are kept after we leave.

Talk about stating the blindingly obvious. And why was it necessary for Angel Gurria, the OECD’s secretary-general, to have another dig at Brexit?

He clearly likes to meddle in the UK’s affairs – it was Gurria who so infuriated Philip Hammond last year after saying that a second referendum on EU membership would significantly benefit the economy. 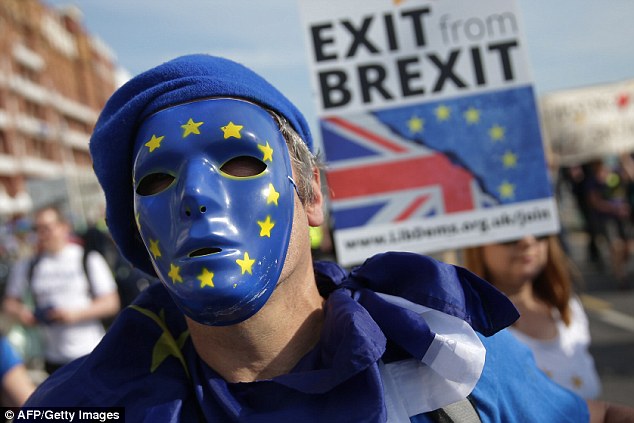 Continued confusion over what happens after Brexit is leading to business paralysis. If this uncertainty gets worse, short-term growth could be put in jeopardy, the OECD warns

By making such a fuss over the future Brexit trading arrangements, Gurria is helping whip up even more of the uncertainty putting off businesses.

Yet the Mexican economist and former diplomat could not resist having another go, claiming the continued confusion over what happens after Brexit is leading to business paralysis. If this uncertainty gets worse, he warns even short-term growth could be put in jeopardy.

It’s hard to disagree with Gurria on this. Too many of the UK’s biggest companies and overseas inward investors are deferring new investment until they see more clarity and detail on future trading tariffs.

Which is why it is imperative that Theresa May & Co make up their minds over what we want from the EU for trading relations.

It’s only when a decision is made – even if it is to leave the customs union – that businesses will start turning on the taps again.

There was also brighter news from the OECD. It has nudged up the forecast for UK growth from 1 per cent to 1.4 per cent this year, and 1.3 per cent next. Around the world, growth over the next year is likely to be around 4 per cent, close to the long-term average.

Unemployment is likely to drop to its lowest level since 1980. In the short-term the outlook is more favourable than it has been for many years,

But there are health warnings too: tit-for-tat trade tensions between the US and China, financial market vulnerabilities and soaring oil prices could put growth at risk, as could any sharp withdrawal of QE and rising interest rates.

Quite rightly, it’s why the OECD is urging governments to press ahead with tax reform and spending policies now to boost investment in a bid to raise living standards while they can still borrow cheaply.

The UK was not the only country to enjoy the OECD’s sting. Alvaro Pereira, its acting chief economist, also warned that unless EU countries get on with their own structural reforms such as banking union, capital union and stabilisation mechanisms, they risk more populist movements.

On Italy, Pereira said that while it’s too premature to talk about a doomsday scenario, ‘In Europe, the clock is ticking.’

He’s right. But for whom?

In the six weeks since he was ousted from WPP, Sir Martin has bought a new shell-listed company, Derriston Capital, and organised investors including Lombard Odier, Lord Rothschild’s Five Arrows and Schroders, to back him with millions of pounds – and promises of more to come.

Sorrell is putting his own skin in the game: in his case, thick skin, worth £40m. To be renamed S4 Capital – after four family generations – he plans on doing another WPP by buying small marketing companies.

Whether he can replicate the success of WPP, which he turned into a £16billion colossus, after buying some of the world’s biggest advertising brands such as JWT and Ogilvy & Mather, is to be seen.

Some say WPP’s problems stem from Sorrell’s lack of up-to-date knowledge of marketing today, where digital spending is the increase and ad revenue on the way down.

But the 73-year-old says he can see the future, claiming recently that successful agencies will be more agile, less heavy. What will be interesting to see is whether S4’s new investors will learn to study his famously astronomical pay packages.

He’s let it be known that the new incentive scheme pays out a fixed proportion of the value above a certain threshold.

One to keep a close eye on.