What a surprise. Like lemmings on steroids, the High Street banks fell over themselves to tell customers that tracker mortgages will be more expensive from next month, following the hike in interest rates.

Some home owners said they had been texted by their bank within minutes of the decision.

Yet, apart from the Skipton Building Society, none of the lenders have been rushing around telling savers that they will soon be earning more on their accounts. 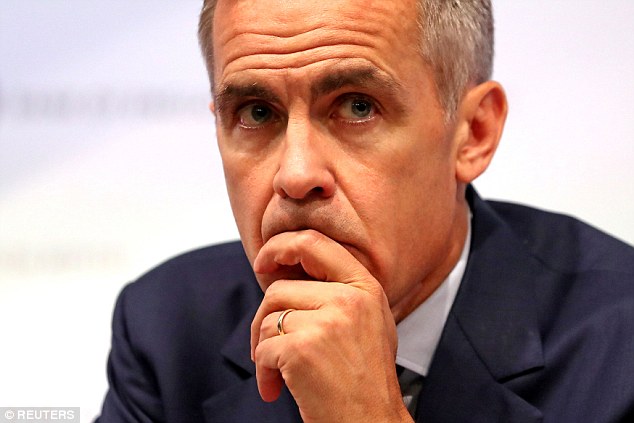 Bank of England governor, Mark Carney, made no secret that this latest rise is the start of many, albeit gradual rises, towards ‘normalising’ rates over the next few years

It’s worse than that – most banks are still messing around saying they need to review the situation before passing on the increase.

As we know from past experience, the big banks will probably find some reason or other to pay the increase to selective accounts rather than across the board.

The fact is Barclays, First Direct and Halifax had already pushed up their two-year fixed deals ahead of the rise.

So why not make the move for savers? After all, they were the first to suffer when rates were cut after the financial crash. Funny that.

This is preposterous behaviour. It’s been the worst kept secret in town that the Bank of England was dead set on increasing the base rate in August to 0.75 per cent, the highest level in nearly a decade.

And there will be more to come. Governor Mark Carney made no secret that this latest rise is the start of many, albeit gradual, rises towards ‘normalising’ rates over the next few years.

The logic from the Bank’s Monetary Policy Committee for the rate hike is that it’s needed to dampen down inflation.

With unemployment at record lows, the MPC is concerned that increased wages and business competing for labour will lead to prices rising in shops, thus triggering a jump in inflation.

You have to ask whether MPC members been on a walk-about out of the south-east recently.

Or studied the labour market where more than 5m are either self-employed or working in the gig economy, and where there are zero signs of any wage rises.

This is particularly true of northern England and regions such as Cornwall where high levels of economic inactivity because of ill-health are having serious impacts on productivity levels.

Then there’s the fallacy that interest rates are low. They are not. Interest rates are only ‘low’ for the banks. Only they can borrow at base rate. They make their money by borrowing low and charging customers high – good old-fashioned arbitrage.

The 1.8m home owners with SVR mortgages will be paying around 5 per cent while small-business owners will be charged 7 per cent or more on their loans while base rates are at 0.75 per cent.

Those with credit cards are already being fleeced with rates of 20 per cent or more. Other pay-day loans can be as much as 100 per cent. Hardly low.

The economy is fragile, whatever Carney likes to say. Britain’s private debt level is about 217 per cent of GDP and rising, while public debt is now approaching 90 per cent of GDP.

No wonder the UK’s savings ratio is on the floor at to 4 per cent, the third lowest since 1963, while the country’s 27m households have been net borrowers since 2016, the first time since records began.

Add into the mix the uncertainty over Brexit and you have an unholy mess.

That’s why raising rates at such a vulnerable time is a big mistake. It’s a brutal, dagger of an instrument.

Paradoxically, the Bank’s dagger will do nothing to pierce borrowing levels as so many households are still suffering from a decade of falling incomes and higher prices.

Tragically, it’s the only tool which the authorities have the imagination to use. It would be far better if Carney and his colleagues looked at the supply side of the money-lending coin.

They should be ordering the commercial banks to stop lending so much on credit cards, personal and speculative loans to households and corporates.

The banks can take it. They are out of the recovery ward and back making money – thanks to taxpayers’ largesse and a dollop of QE.

Now Carney must insist the increase is passed on to savers but also look at controls on credit creation.

Otherwise the balloon will go up again with catastrophic consequences. Economist Ann Pettifor warns the Bank’s decision is a mistake comparable to the one that Alan Greenspan pursued at the Federal Reserve from 2003 to 2006.

Remember how that ended?