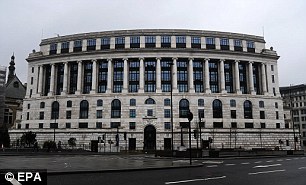 To let: Unilever is to close its London HQ (pictured)

A Major Unilever shareholder has lashed out at its lack of engagement over the decision to move its corporate HQ.

Iain Richards, at Columbia Threadneedle Investments, a top ten shareholder in the consumer goods giant, said: ‘They need to do more to convince UK shareholders of the merits of the move.’

Unilever chose Rotterdam over London as its new HQ – a blow to a UK Government trying to uphold Britain’s status as a post-Brexit centre for business.