After spending four years living in a soulless apartment in a converted hotel in Abu Dhabi, Gabriel Ward was itching to return to the UK.

The primary school teacher, 54, had taken a larger salary in the Middle East so he could build up his small private pension.

But he always intended to move back before he retired and, by 2015, he’d had enough. He started spending his time scouring the internet for affordable homes around Manchester, near his extended family.

When he stumbled across an advertisement for a block of £120,000 luxury apartments in an up-and-coming part of Manchester, it felt like the opportunity he’d been waiting for. 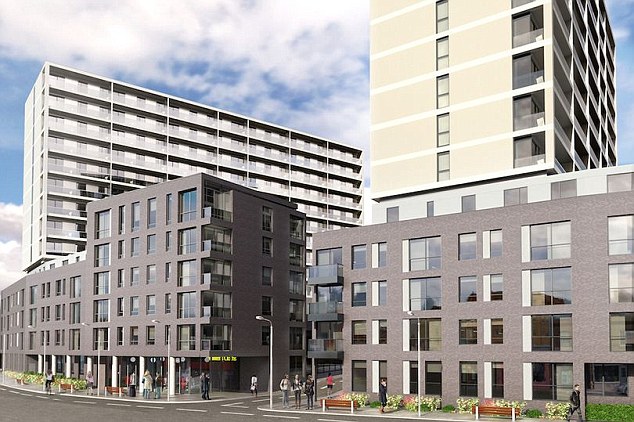 Promise: An artist’s impression of the the Pinnacle Angelgate development near Manchester.  Around 320 buyers handed £33m in total to the company behind the development

The development, yet to be built, was part of a major drive to bring new, high-end housing to cities in the North of England.

These trendy properties were being billed as the jewels in the crown of the ‘Northern powerhouse’ — then-chancellor George Osborne’s drive for better infrastructure in the North — and would bring young professionals to previously uninhabited areas of Liverpool, Sheffield and Manchester.

Gabriel had squirrelled away just enough to afford a £120,000 one-bed flat. And if he got a job nearby, he’d be able to continue building up his pension pot for retirement, when he’d be mortgage-free.

He put down the required 80 per cent deposit, or £96,000, leaving just enough in his life savings to cover the remaining £24,000 when it was due on completion.

Although it was a large sum, he only had to put down £3,000 to start with and he was reassured that he was making a smart investment.

Construction was due to finish in November 2016, meaning Gabriel should have been in by Christmas. But his one-bedroom flat hasn’t been built.

The Angelgate plot is an abandoned building site. And there is little prospect of Gabriel, who is now in remission from cancer, ever getting his money back.

Around 320 Angelgate buyers have handed £33 million in total to the company behind the development, and now just £2 million of their investment remains, documents show.

Across the country, thousands of investors in so-called buyer-funded developments are in the same boat.

With these schemes, you are required to pay a deposit of up to 80 per cent for a property that has yet to be built. This is because the buyers — rather than a bank — fund the entire cost of development, from marketing to construction. 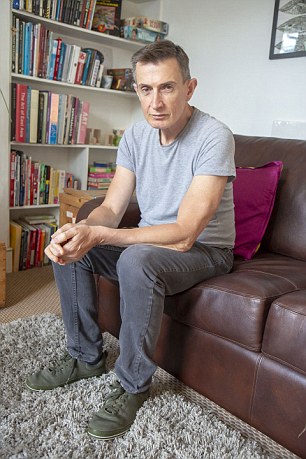 Duped: Gabriel Ward paid a £3,000 reservation fee for his Angelgate flat in January 2015

It’s a risky building model that became popular after the 2008 financial crash, when banks grew unwilling to back major property deals.

Gabriel paid a £3,000 reservation fee for his Angelgate flat in January 2015.

The developer, Manchester-based Pinnacle Angelgate Ltd, recommended a solicitor (through a third party) to help with his paperwork.

Construction began in 2015 but progress was slow. In June, pictures sent to buyers in a progress report show diggers breaking ground with a sign in the forefront saying: ‘Sophisticated high-end design makes this an unrivalled city development.’ But by November work at the site had halted.

Throughout the year, Gabriel and the other investors received emails from Pinnacle explaining that there was an issue with the subcontractor that was causing delay with the building work.

But they were assured that the project was still very much on track. Gabriel was told he needed to transfer the remainder of the £96,000 deposit or he would lose his reservation fee. This was when he first felt uneasy with the process.

He says: ‘Pinnacle started ramping up the pressure through the solicitor they referred me to.

‘They were quite threatening and kept pushing me to transfer the sum. I wasn’t worried that they were trying to defraud me at that stage.

‘But I did feel unsure about handing over every penny to my name. I was very keen to leave Abu Dhabi at the time so I sent the money.’

Gabriel paid the full deposit in the summer of 2015 after his solicitor stressed that he would be missing out on a great deal and faced losing his £3,000 reservation fee.

According to an official report from Pinnacle’s administrator Duncan Swift, of Moore Stephens chartered accountants, £28.7 million of investor deposits have been spent.

About £10 million is believed to have gone towards buying the land and basic construction. But no more than a few foundations have been laid.

Around £13 million was paid out in ‘sales commissions and operations costs’, the documents show.

The report says: ‘It is not clear how on any basis [Pinnacle] could justify spending 40 per cent of the funds received from buyers on sales and marketing commissions.’

Pinnacle refutes these claims. In a statement on its website, it points to problems with its contractor, PHD1 Construction Limited, which it tasked with carrying out the building work.

Pinnacle claims PHD1 undervalued the cost of the project by £20 million and couldn’t make progress with the original deposits. 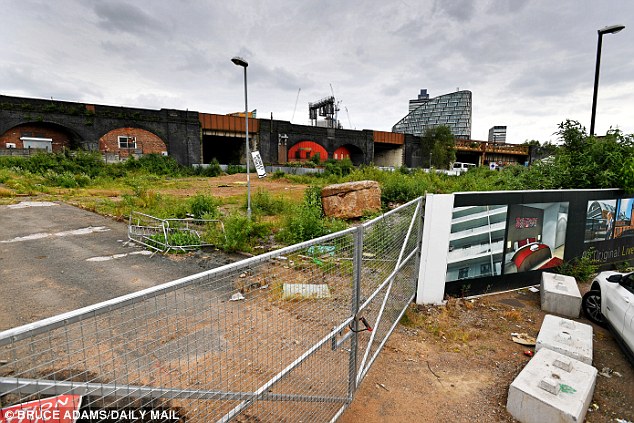 Stark difference: The Pinnacle Angelgate site today – Construction was due to finish in 2016

PHD1 went into liquidation in 2015.Gabriel says the moment he discovered his £96,000 was lost is etched in his memory.

He had been diagnosed with a rare form of leukaemia in January 2016 and spent the following six months in hospital in Abu Dhabi.

He was sent an email by another investor who told him nearly all the money they had paid towards the homes had vanished. ‘I was recovering from six rounds of chemotherapy and had been in a very dark frame of mind because of my illness. Then all of a sudden I’m thinking: ‘So I’m going to live but now I’m completely broke’.

‘I felt such shame. I’ve never had a lot of money to my name, so I’m devastated to have fallen for their appalling tactics.’

Gabriel is now living from one pay cheque to another. He rents a room in a flat in North London, where he works as a supply teacher. Administrators have pulled the plug on the Angelgate project as a hunt begins for the millions that have vanished.

Pinnacle has links to convicted conman Tony Freeman, who was jailed for 18 months in 2006 for defrauding a cancer charity and whose home was reportedly raided in July 2017 over a £3 million tax fraud probe.

In local news reports, Pinnacle said the raid was a personal investigation and nothing to do with the company. It added that Freeman works for it as a consultant but denied that he has any involvement in the firm’s ownership. Mr Freeman could not be reached for comment.

In April, the plot of land was bought at auction for £5.2 million by Far East Consortium. Gabriel fears this will not improve his chances of getting his money back.

David Niven, partner at Penningtons Manches law firm, is managing more than 200 claims against buyer-funded developers across the country. 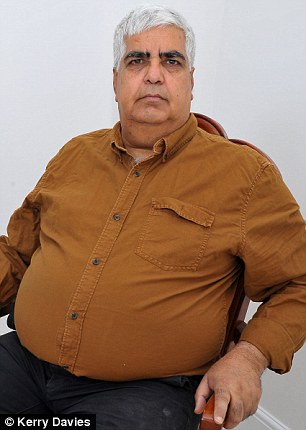 He says: ‘People might think that investing in property is only for the wealthy but most of my clients are people who have used their life savings or an inheritance to buy into a development. They do so after receiving assurances from solicitors that their money will be protected.

‘But a lot of these solicitors have a conflict of interest and aren’t acting in the buyer’s best interest.

‘I’ve seen many cases of solicitors working for the developers when they were setting up the scheme.

‘Then the developer tells buyers that they need to use that same solicitor. The work some of them do is shoddy beyond belief.’

Mehdi Sadeghian, another investor, was attracted to the Angelgate scheme because it offered a better interest rate than his savings account.

The 61-year-old, who lives in Windsor, was approaching retirement when he was called by a marketing firm about the project in 2014.

He later gave £70,000 to make up the 50 per cent deposit — the amount being requested from investors at that time.

The freelance IT consultant hoped buy-to-let was a safe way to make his retirement fund pot go further.

But like Gabriel, his investment has been spent by the developer — with no sign of any returns.

Mehdi says: ‘The whole project was practically endorsed by local politicians so it seemed watertight to me.

‘I’m outraged that the developers are getting away with this.’

Mehdi’s wife Eila, 53 has had to return to full-time work as a nursery teacher to make ends meet.

Mehdi says he worries how he’ll support his 14-year-old son Eilia, who has learning difficulties.

‘It’s put tremendous stress on my whole family and been devastating for me and my wife,’ he adds.

Michael and Dolores Karashialis wanted to use their own solicitor when buying two units in a development of student accommodation in Leicester in 2012.

They had been called about the venture by Swiss sales company Landmark Developments AG and thought it was a good opportunity to boost their savings as they approached retirement. But the developer, Mia Developments Ltd, insisted that the couple used their solicitor.

Michael, 63, says he was told the company, Scott Fowler Solicitors, had sorted the paperwork for all the other investors and that he’d receive ‘preferential rates’.

The couple repeatedly asked the solicitor how their investment would be protected if something went wrong. They say they were led to believe that a bond financing the development would act like a ‘guarantee’ for their deposit. They claim they were told it would take a ‘nuclear disaster’ for the scheme to go wrong.

The couple handed over a 50 per cent deposit of £62,500, with the rest due on completion. But as the months wore on, they found little progress was being made on the build.

Primary school teacher Dolores, 57, says: ‘The developer had a website with a webcam showing what was happening with the building work.

‘We checked it about once a week but after a few months the webcam was shut down. That’s when we became really concerned.’

The next the couple heard was that Mia Developments had gone into liquidation. Its director is reported to have moved to Dubai.

The funds for the building are believed to have been spent.

They have received nothing from the financing bond that they were told would act as insurance.

Michael and Dolores are now suing Scott Fowler Solicitors for professional negligence. David Niven, who represents the Karashialis, says: ‘The solicitor here should have been checking the bond provider.

‘But I see in a lot of these cases that the insurer is often located off shore and not even regulated. Solicitors are brought in to give the off-plan building scheme a veneer of credibility. Their heads were turned with the large fees they could receive and so did nothing to protect their clients.’

Greater Manchester Police launched an investigation into the Angelgate development and has now passed it to its regional fraud team, Titan.

A spokesperson for Titan, says: ‘There have been a number of referrals from different police forces concerning investment fraud.’

‘BDO was not responsible for the selling of the property and therefore cannot comment on the matter,’ a spokesman adds.

Scott Fowler Solicitors says it is unable to comment on ongoing legal matters. A spokesperson for MVG Holdings, Pinnacle Angelgate’s parent company said: ‘The payments from the buyers’ company were used to purchase the site, for initial building and ground works, professional fees and agency commissions, and supervisor, planning and architect’s fees.

‘PHD1 went into liquidation in 2015 and it came to light that the company had significantly under-valued the build.

‘For more than a year, we struggled to find another construction company willing to build the development for a viable cost. A number of buyers chose to support a petition to place the Angelgate development into administration.

‘We share the disappointment and frustration the investors have with regards to this project, and apologise that we were unable to successfully build out Angelgate.’