Sixty-three head office jobs at Maplin have been axed just over a week after the electronics retailer collapsed into the hands of the administrators.

Accounting giant PricewaterhouseCoopers warned they have yet to find a buyer for the stricken retailer, meaning more staff – and parts of the branch network – could face the chop.

Around 2,500 jobs hang in the balance, with today’s head office culls affecting Maplin’s offices in London and Rotherham. 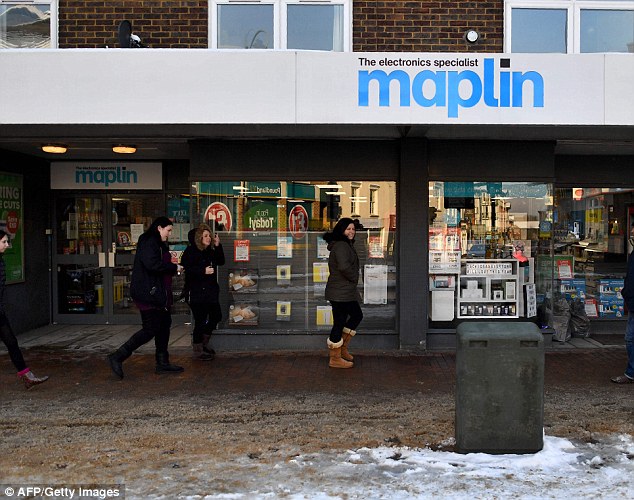 Job cuts: Sixty-three head office jobs at Maplin have been axed just over a week after the electronics retailer collapsed

Fifty-five of the job cuts are being made in London, with the remainder in Rotherham.

‘All staff affected have been informed and will be paid up to and including their last day of employment’, PwC said.

Toby Underwood, joint administrator and PwC partner, said: ‘It is with real regret that we have made this decision.

‘We are grateful for the support of the employees during this difficult period and we will make every effort to help the affected staff, working with the Maplin HR team over the coming days.

‘The company is continuing to trade but due to a lack of interest we may be required to initiate a controlled closure programme.’

He added: ‘We still believe there is strong value in the company and we remain focused on doing all we can to preserve the business while we continue trying to achieve a sale.’

Last week, Maplin’s boss, Graham Harris, said the group had been struggling to mitigate the impact of the pound’s devaluation since June 2016’s Brexit vote, the withdrawal of credit insurance and a weak consumer environment.

The group, which has 217 stores across the UK, is remaining open for business and continuing to trade for the time being.

Edinburgh Woollen Mill, run by retail billionaire Philip Day, had been touted as a potential rescuer for Maplin.

But talks are thought to have broken down, leaving Maplin’s owner, private equity firm Rutland Partners, no alternative but to call in administrators.

On the same day Maplin collapsed, Toys R Us fell into the hands of administrators. Fashion group New Look announced plans to close a string of stores on Wednesday, putting nearly 1,000 jobs at risk.

Adding to an ever-growing list of high-street retailers with financial woes, John Lewis posted a 77 per cent drop in annual profits today, while announcing a 1 per cent cut to staff bonuses.

In the restaurant sector, Byron, Prezzo and chains owned by Jamie Oliver are also undergoing restructurings as they face sluggish sales and rising costs.