MARKET REPORT: Asos and Boohoo reel as US slaps tax on web sales

Internet retailers floundered yesterday after a US tax ruling bumped up the bills that companies such as Asos and Boohoo will have to pay when they sell products across the pond.

A decision from the US Supreme Court late on Thursday, which allows states to collect more sales tax from ecommerce firms, caused shares at Asos and Boohoo to become momentarily unstitched.

Online stores were previously allowed to dodge charging sales tax to consumers in states where they didn’t have a physical presence.

But yesterday, this decades-long policy was reversed to put web firms on the same footing as their bricks-and-mortar rivals. A decision from the US Supreme Court, which allows states to collect more sales tax from ecommerce firms, caused shares at Asos and Boohoo to become momentarily unstitched

Online sellers will be forced to charge consumers the rate of sales tax which applies in the state where they buy the product, and analysts have estimated this could generate an extra $8billion to $23billion a year for the US government.

Analysts at Barclays said: ‘This ruling is not helpful for either Asos or Boohoo. But we believe the impact is relatively modest and investors shouldn’t get too carried away on the downside with negative headlines.’

Amazon took a 1.1 per cent hit during Thursday trading in the US and was regaining the lost ground on Friday, as brokers agreed the ruling would have little effect on the firm. It already charges sales taxes in every state, so shouldn’t have to ramp up the costs of its goods. 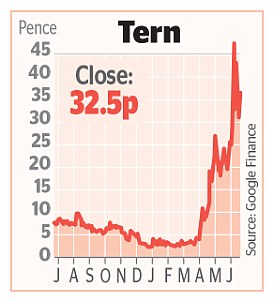 Technology investment group Tern shot up 28 per cent yesterday as it announced one of its companies had hit a ‘significant milestone’.

DA, a cyber-security business which Tern has a 56.8 per cent stake in, began marketing its new ‘internet of things’ software.

Developed with French defence specialist Thales, it will be used to protect internet-connected medical devices from hackers.

However, its competitors, such as Wayfair and Overstock, had let taxes slide in states where they have no physical presence – and their shares sank in the US on Thursday, but were making some recovery on Friday.

Back in the world of physical retail, Burberry shares crept up as it readied for a £150million repurchase of shares.

Investors were cautiously turning back to mining stocks too as Glencore, Anglo American and Fresnillo all appeared among the FTSE 100’s ten biggest risers on Friday. BHP Billiton and Rio Tinto were also in the black.

The miners were given some brief respite from the tremors caused by President Trump’s ongoing trade war, as his ire turned away from steel and aluminium and on to cars.

The increase of 1m barrels per day was not as much as many analysts had expected, which fuelled a rise in the price of Brent crude to $74.63 per barrel.

Inmarsat’s shares dialled up as the satellite telecommunications business was placed in the cross hairs. US satellite operator Echostar, which made a takeover bid earlier this month, yesterday revealed it had built up a near 3 per cent stake in the British company.

The previous bid was rejected because the undisclosed price ‘very significantly undervalued’ Inmarsat.