MARKET REPORT: Bookies boosted as England crash out of the World cup

England may have been in a sombre mood after Wednesday night’s World Cup defeat, but the bookies were quietly celebrating their victory.

Paddy Power Betfair, William Hill and Ladbrokes Coral owner GVC all saw their share prices rise after avoiding millions of pounds of payouts to punters who had a bet on Gareth Southgate’s side.

Ladbrokes said that Croatia’s extra-time goal ‘saved us millions upon millions’. A spokesman added: ‘If England were to have made the final and consequently won it, that would have cost UK bookies around £200million.’

William Hill said that it hit a record, excluding the Grand National, of almost 8,000 bets per minute in the build-up to the match and raked in more than £6million. 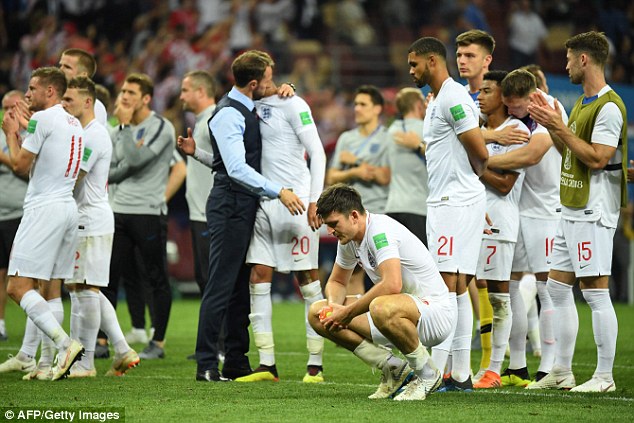 England manager Gareth Southgate consoles his team after they were beaten by Croatia in the World Cup semi final. But their loss was the bookies’ gain

ITV, along with the rest of the nation, was less grateful for England coming home. Its share price, which had risen in anticipation of a World Cup advertising boost, fell 1 per cent, or 1.9p, to 175.6p yesterday as Goldman Sachs downgraded the broadcaster.

The investment bank pulled its recommendation for ITV down from ‘buy’ to ‘neutral’, saying any advantage it would gain from the tournament was now priced in to the shares.

FTSE 250 outsourcer Capita, which has been compared to bust competitor Carillion due to its weighty debt piles, saw its shares rise as it picked up more vital work. 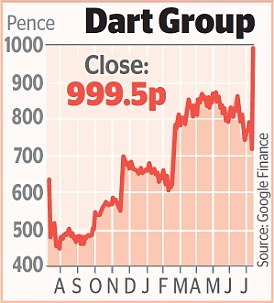 The owner of Jet2Holidays, Dart Group, saw its shares soar yesterday, as sales at its airline and package holiday businesses flew.

Jet2’s boss Philip Meeson, who owns 37.9 per cent of the business, saw his stake rise by a hefty £146million.

The company, which collects the London congestion charge and the BBC licence fee, was chosen to manage the administration of all primary school national curriculum assessments.

Winning the six-year contract worth £109million helped Capita’s shares climb 4.9 per cent, or 8p, to 169.1p. Investors were also heartened by the sale of its parking management business, Parkingeye, for £235million to investment bank Macquarie and private equity firm MML Capital.

Jon Lewis, Capita’s chief executive, said it was part of a strategy to simplify and strengthen the business. He said Capita now expected to raise more than £400million from selling non-key businesses in 2018, ‘well ahead of our target of £300million’.

Capita’s smaller peer Interserve also won a £35million contract yesterday, although its announcement nevertheless came ahead of a 2.9 per cent fall in shares to 60.2p. The five-year deal is to deliver services such as catering and cleaning to the 450-bed NHS King George Hospital in north-east London.

AIM-listed Caledonia Mining was also struggling after a fatal accident at its Blanket Mine in Zimbabwe. Steve Curtis, chief executive of the gold mining firm, said: ‘This is a very disappointing setback to our efforts to improve safety at Blanket which has been a key focus area for the business in 2018.’ Investors showed displeasure at the safety breach as shares fell 5.1 per cent, or 33p, to 600p.

The firm wants shareholders to join a class action against Glencore to claim for losses suffered when its shares crashed last week, after the US Department of Justice announced a corruption investigation into the company.

IT firm Computacenter meanwhile gave an unscheduled market update, announcing ‘considerable progress’ on profitability. Shares shot up 9.3 per cent, or 128p, to 1502p.