The engineer soared by as much as 13 per cent in early trading yesterday despite saying issues with its Trent engines would set it back an extra £100million.

Investors were more focused on new guidance that said Rolls was on course to generate more cash than previously expected in the coming years.

Shares rose to levels not seen for four years as traders gave a fresh vote of confidence to chief executive Warren East’s plan for transforming the company. 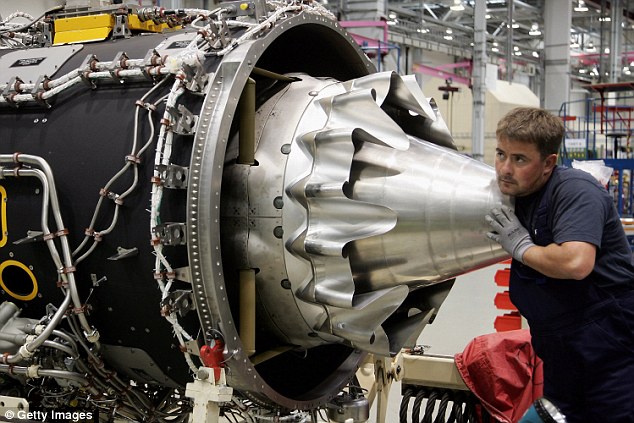 Since then the maker of civil planes, military jets and ships has slashed costs and axed thousands of jobs to slim down its structure, with 4,600 white collar roles the latest to face the chop this week.

East said the overhaul was essential to the engineer’s future success at an investor meeting yesterday.

He said: ‘The people, the assets, and the money, those are key to create market leadership and strong financial performance.’

Rolls also said it was in a better position to boost returns for shareholders and was likely to beat its target of generating £1billion of cash by 2020.

Meanwhile, it also predicted a higher-than-expected cash flow in the years afterwards. 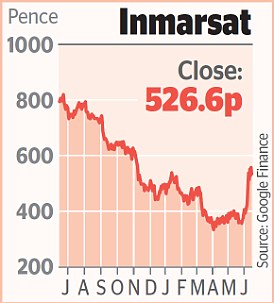 Inmarsat may soon be at the centre of a takeover battle.

The satellite communication company rebuffed an approach from US rival EchoStar last week, prompting speculation it could be at the centre of a bidding war.

However, politicians such as Liberal Democrat leader Sir Vince Cable, are calling for it to be classed as an asset of national importance, which could raise the possibility of government intervention.

It tamped down any gloom about problems with its Trent engines, with associated costs rising from £340million to £440million.

Rolls said it was mitigating this with separate cost savings. Shares eventually closed up 7.6 per cent, or 67.2p, at 950p.

A gloomier mood prevailed among Aveva shareholders. Investors sold shares in the software supplier after Barclays analysts downgraded its stock to ‘equal weight’.

Shares had surged on Thursday when Aveva’s first results after finishing a multi-billion pound merger with France’s Schneider Electric showed it had trounced City expectations.

Barclays said the merger would give Aveva a better chance of competing on the global stage but added: ‘We are early in the integration and it will take time to meaningfully increase the low growth rate of the larger Schneider software business.’ Its shares sunk by 6.6 per cent, or 186p, to 2650p.

Nearly £1billion has been wiped from the value of heroin substitute maker Indivior after a competitor won permission to launch a rival drug.

Dr Reddy’s Laboratories has been given approval by US regulators for its own version of Suboxone Film, Indivior’s flagship treatment for drug addicts.

It sent shares in Indivior down by 27 per cent, or 134p, to 360.5p, as traders fretted that a cheaper alternative to Suboxone will wreck profits.

Indivior said it is already taking legal action to prevent the copycat drug from launching.

Indivior is rushing to build up interest in its newest product, Sublocade, which is a monthly injection to reduce addicts’ heroin cravings.

Superdry rose 2.4 per cent, or 28p, to 1197p after brokers at Liberum bumped up the clothing retailer’s rating. Raising it from ‘hold’ to ‘buy’, analysts stuck with a price target of 1350p.

They said a shares plunge of more than 30 per cent over the past six months meant it was a bargain.

Superdry has a strong balance sheet and better cash flows after improvements to its supply chain, the note added.