In a stinging note, investment bank Jefferies questioned whether ‘overhyped’ Tisci was the right choice for Britain’s biggest luxury brand, which is trying to boost flagging sales.

Tisci, known for his racy and gothic style, was drafted in from French haute couture house Givenchy as a replacement for long-serving former creative director Christopher Bailey in March.

When he was unveiled, analysts heaped praise on Burberry for bagging the services of the 43-year-old Italian, who has designed outfits for Rihanna, Madonna and Kim Kardashian, and is credited with turning around Givenchy. 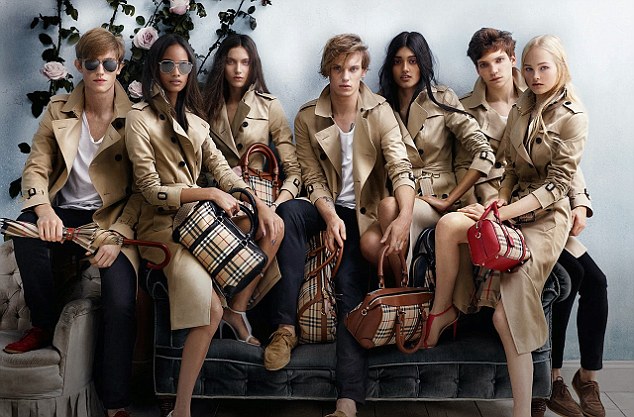 But Flavio Cereda-Parini, an analyst at Jefferies, did not ‘share in the love-in over Tisci’ and questioned whether he would be able to carry his success over to a much bigger firm such as Burberry.

‘We think the choice of Tisci by Burberry chief executive Marco Gobbetti is a bold and cautious one at the same time: bold in terms of a further shift towards cutting-edge product and streetwear influences – although this is hardly disruptive any more – cautious in that he hired a fellow Italian whom he knows and has worked with before albeit in rather different surroundings,’ he said.

‘Whilst we certainly expect a spike in brand buzz once the first collection is unveiled with the inevitable platoon of celebrities, this needs to translate into sales and that is far less obvious.’

Cereda-Parini also said there is little evidence Burberry was succeeding in making its products more upmarket and hit out at its declining digital presence. 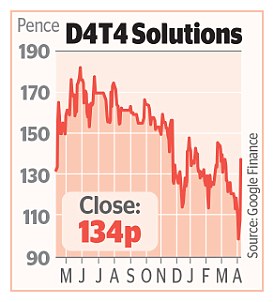 A stonking trading update and a flurry of contracts lit the fuse on D4T4 Solutions’ share price.

After a ‘very strong trading performance’ in the second half of the year, the AIM-listed data firm reports a record level of bookings in the 12 months ending March 31.

Over the past few months it has taken on a Taiwanese bank, a global US financial services firm, a major online retailer and a Japanese car manufacturer as clients.

The FTSE 100 rose after China calmed fears of a trade war with the US by pledging to open up its economy and lower import tariffs. The blue-chip index ended the day up 1 per cent, or 72 points, at 7266.75.

China’s announcement gave a boost to miners, which had suffered heavy losses on Monday. Anglo American was one of the biggest risers, its shares rising 5.1 per cent, or 81.6p, to 1692p.

On the FTSE 250, Card Factory’s shares shot up despite profits falling 12.3 per cent to £72.6million in the year to January 31 as rising wages and a weakening pound hit its bottom line.

But while profits fell, like-for-like sales were up 2.9 per cent and revenue rose 6pc to £422.1million.

Prior to its results, analysts speculated that the firm might reduce or scrap its dividend.

Analysts at Peel Hunt upgraded FTSE 250-listed infrastructure firm John Laing to ‘outperform’ from ‘neutral’ due to its resilience in tough trading conditions. Its shares edged up 0.1 per cent, or 0.4p, to 277p.

Flowgroup sold its gas and electricity provider, Flow Energy, to Co-operative Energy for £9.25million ahead of the Government’s looming energy price cap.

However, the AIM-listed business risked the ire of shareholders by revealing they would not receive a penny from the deal. As a result, its shares plummeted 61.3 per cent, or 0.05p, to 0.03p.

Clean fuel company ITM Power has inked a deal to supply the Metropolitan Police with hydrogen for its new fleet of zero-emission vehicles. Shares jumped 4.2 per cent, or 1.45p, to 32.15p.