MARKET REPORT: Ocado soars again to give its founder another £18m

The boss of Ocado became £18.4million richer yesterday after shares in the online supermarket soared again.

Chief executive Tim Steiner saw the value of his stake rocket to more than £218million after a broker upgrade caused its shares to shoot up 9.2 per cent, or 73.4p, to 873.4p.

It means the 48-year-old’s stake has grown £79.8million since Thursday, when his firm announced a blockbuster deal with Kroger, a US grocery giant which achieved sales of £91billion last year.

The former Goldman Sachs bond trader, who founded Ocado in 2000, is in line to receive up to 4m shares next year as part of an incentive scheme, which at today’s price would be worth £34.9million. 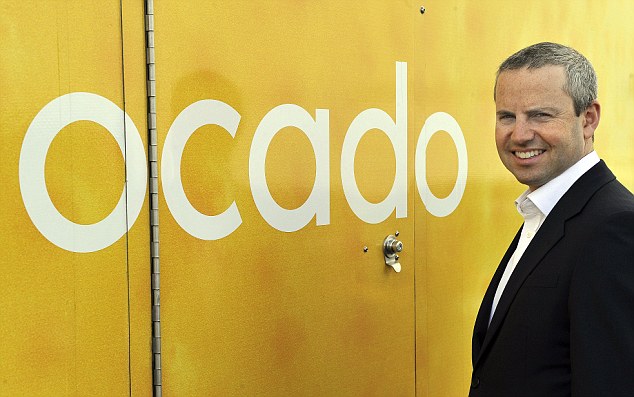 Ocado chief exec Tim Steiner saw the value of his stake rocket to more than £218m after a broker upgrade caused its shares to shoot up 9.2 per cent, or 73.4p, to 873.4p

He has also been handed shares worth in excess of £60million as part of a ‘golden handcuffs’ agreement struck before the firm floated in 2010.

Ocado, which is now worth £5.3billion, is poised to break into the FTSE 100 for the first time next month, marking a dramatic turnaround in its fortunes.

In 2010, Philip Dorgan, a prominent retail analyst, famously wrote: ‘Ocado begins in an “o”, ends in an “o” and is worth zero.’

The FTSE 100 is being tipped to break the 8,000 mark after soaring to a record high.

Britain’s index of leading companies was boosted by a recent rally in the price of oil as well as a weakening pound, which fell to a 2018 low against the dollar. 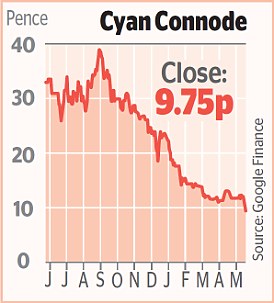 Shares in wireless network provider Cyan Connode fell 13 per cent after its posted steep losses for 2017.

The Aim-listed firm, which gets smart devices talking to each other, reported an £11.1million loss last year, worse than the £7.9million loss the year before.

Typically, the FTSE 100 does well when the pound slides, as its constituents get around two-thirds of their earnings overseas.

It means that the further the pound falls the more company profits are worth when converted back into sterling.

Astrazeneca was given a much-needed boost after one of its flagship drugs was cleared for sale in the US.

The country’s regulator finally approved Lokelma – at the third time of asking – a treatment for adults with hyperkalemia, a condition suffered typically by those with kidney problems that can lead to a heart attack.

Approval was vital for Astrazeneca, which has seen sales of its older medicines fall because of competition from generic rivals.

Failure to seal approval would also have called into question its decision to buy Lokelma’s original developer, ZS Pharma, for £1.8billion in 2015.

The announcement was met with cheers from analysts, who predicted Astra would go on to dominate the market for hyperkalemia treatments.

Credit Suisse downgraded mining giant Evraz to ‘underperform’, pushing its shares down 3.7 per cent or 18.5p to 483.7p and to the bottom of the FTSE 100.

On Aim, shares in heart valve manufacturer Aortech International crashed after it tapped up investors for up to £2.6million to fund the development of new textile patches and grafts. Shares plunged 12.5 per cent, or 5.5p, to 38.5p.

Analysts at Deutsche Bank cut the target price of Asos, the trendy online fashion retailer, from 7400p to 7150p over concerns about its growth.

Allergy Therapeutics shares were boosted by positive data from a phase two study for its grass allergy treatment.

It paves the way for phase three trials next year.