M&S has revealed that it will close 100 stores across the UK in the next four years – up from 60 six months ago.

The closures will mainly affect its larger clothing and home stores, which have under performed for several years, but bosses say the move is ‘vital’ for its survival.

They will concentrate on expanding its online operation in the hope it will bring in a third of all sales by 2022 and squeeze more cash out of its hugely successful food business.

M&S today named 14 stores earmarked for closure, with 21 already having shut and a further 65 are yet to be earmarked.

In total the high street giant has 1,035 stores in the UK, 300 large one containing clothing, home and food, 696 food halls and 39 outlet centres. 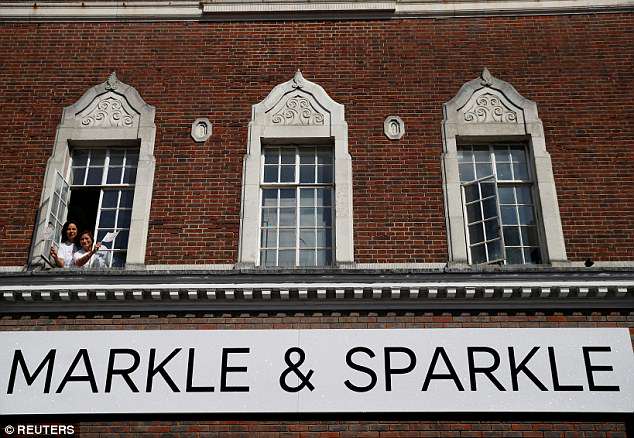 M&S, which rebranded itself as Markle and Sparkle for the royal wedding, has revealed that it will close 100 stores in the next four years in a new terrible blow to Britain’s high streets

The M&S stores earmarked for closure in the next year

M&S today named 14 stores earmarked for closure, with 21 already having shut and a further 65 are yet to be earmarked

Today they said its Bayswater, Fleetwood Outlet and Newton Abbot Outlet will close by the end of July 2018 while Clacton and Holloway Road in London will both close by early 2019.

Darlington, East Kilbride, Falkirk, Kettering, Newmarket, New Mersey Speke, Northampton, Stockton and Walsall are also proposed for closure and will now enter a period of consultation with all 626 affected employees.

The move is part of a five-year turnaround plan spearheaded by chairman Archie Norman and chief executive Steve Rowe.

They have been seeking to save costs through store closures and shutting distribution centres as part of a wide-ranging efficiency drive as the company’s financial performance deteriorates.

Sacha Berendji, retail and property director at M&S, said: ‘We are making good progress with our plans to reshape our store estate to be more relevant to our customers and support our online growth plans.

‘Closing stores isn’t easy but it is vital for the future of M&S. Where we have closed stores, we are seeing an encouraging number of customers moving to nearby stores and enjoying shopping with us in a better environment, which is why we’re continuing to transform our estate with pace.’

The retail giant  says it is ‘accelerating’ its strategy transformation strategy launched in November last year as it focuses more on food and online sales.

M&S currently teeters on the brink of crashing out of the FTSE 100 and experts are preparing for the 134-year-old retailer to announce another drop in profits this week.

Another disappointing set of results could see it forced out of the blue chip index which it has been part of since its formation in 1984.

David Gill, national officer for shopworkers’ union Usdaw, said: ‘This salami-slicing approach to reorganising the business is extremely distressing for the staff.’

‘Usdaw has thousands of members working for Marks & Spencer and the staff now need, more than ever, the representation and support of an independent trade union.

‘We again urge M&S management to abandon their long-held resistance to recognising Usdaw as the union to represent its staff.

‘It is simply unfair that they continue to refuse their staff access to Usdaw, having made the decision on their behalf not to engage with a trade union.’

The turnaround King brought in from Asda

Last year he was appointed as chairman of Marks & Spencer.

Mr Norman was credited with saving Asda from bankruptcy and has also been chairman of ITV and fund manager Lazard London.

His new job marked the latest change to the top team at the retailer, where struggling clothes sales have dented profits.

He was chief executive of the Tory party and MP for Tunbridge Wells for eight years, stepping down in 2005.

In November Marks and Spencer announced a wide-ranging restructure amid falling profits.

The former shop boy who rose to be the boss

Chief executive Steve Rowe started at the bottom of M&S.

He started with M&S aged 15 as a Saturday boy in Croydon and on leaving school aged 18 he became a trainee at Topshop.

After four years he rose to store manager but felt the pipeline for promotions was sparse, so he joined M&S as a commercial management trainee.

Rowe worked at various branches including London’s Marble Arch and then moved to head office where he has worked for every part of the business.

He became director of food in October 2012.

In 2016 he became M&S boss but has been tasked with having cut jobs and stores as its profits have started to suffer in recent years.