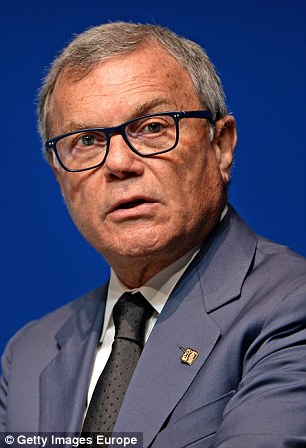 Sir Martin Sorrell has snatched an advertising firm from under the noses of his former business WPP despite their threat he could be stripped of up to £20million promised when he left under a cloud.

He pressed ahead with the deal despite receiving a legal threat from WPP alleging that he had broken a confidentiality agreement with the firm.

Today he dismissed claims he is planning to compete head to head with his former firm WPP as ‘ridiculous’.

He said: ‘We’ve probably grown from being a peanut to a coconut with MediaMonks.

‘We are a bigger animal now, but still to say a 20billion US dollar company can be frightened of a peanut or a coconut seems to be ridiculous.’

Asked if Sorrell would now receive his bonus of up to £20million from the ad giant, a WPP spokesman said: ‘WPP’s lawyers wrote to Sir Martin’s lawyers last week pointing out the breach of his confidentiality undertakings in his approach to Mediamonks after his resignation from WPP. Despite subsequent protestations from Sir Martin’s lawyers, we are well aware of the facts and he has jeopardised his LTIP entitlement.’

WPP threatened to deny him £20million in share awards if he pursued the Media Monks acquisition and even sent him a legal letter warning him about this.

But the media mogul has ploughed on regardless in what is being called the fastest stock market return in British corporate history.

Sir Martin, 73, is understood to have been warned by WPP that if he used knowledge or contacts gleaned from his time at WPP he would be in breach of his leaving terms. He said he wants S4 Capital to be more ‘nimble and agile’, while using MediaMonks as a platform to tap into the 200 billion US dollar (£151 billion) global market for digital advertising.

He added: ‘This is really our focus for the future. Clients want a much more nimble and agile organisation that’s more efficient and can respond quicker.’

Sir Martin, who earned £70million in 2015, built WPP from a tiny wire baskets maker into one of the world’s most powerful advertising agencies, worth more than £14billion.

But he stepped down as chief executive earlier in April amid allegations of personal misconduct, in one of the most spectacular corporate upsets in recent years. 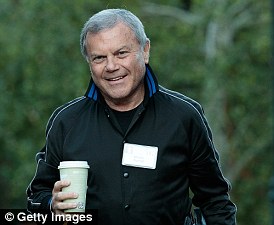 On the move: Sir Martin is building a firm to rival WPP

Sir Martin Sorrell has shrugged off legal threats from his former firm and will this week jet out to one of the biggest – and most secretive – business gatherings in the world.

The embattled advertising guru is locked in a bitter row with WPP, which says he may face censure over his new marketing services venture.

Sorrell, who set up S4 Capital shortly after his resignation, last week received a legal letter from WPP threatening that his competing bid for Dutch ad agency MediaMonks may see him lose future share payments worth up to £20million.

Sorrell’s response has been to plan a trip to Idaho’s Sun Valley conference, where he will rub shoulders with some of the world’s most famous business leaders.

Ivanka Trump, the daughter of President Donald Trump, and her husband Jared Kushner were among the attendees at last year’s conference, hosted by investment bank Allen & Co.

Claims later emerged that WPP had been investigating whether Sir Martin had spent £300 of company money on a prostitute.

Sir Martin strenuously denies the allegations. Details of the investigation were never disclosed by the company.

After leaving WPP, Sir Martin kept his entitlement to shares based on WPP’s performance, which have yet to be released to him and could now be stripped.

Unusually, his contract also allowed him to set up another venture immediately.

Sir Martin revealed just six weeks after leaving WPP that he was setting up S4 Capital, triggering concern at WPP.

He said he planned to build a ‘multi-national communication services business focused on growth,’ having pledged he had no plans to retire.

Last week it emerged that S4 Capital and WPP were both interested in buying Dutch digital advertising agency Media Monks, with estimates the price could go as high as £264m. And today the deal was confirmed.

S4 has previously detailed plans for Sir Martin to pump in £40million, with support pledged from investors for up to £150million more.

The 73-year-old advertising guru has also previously dismissed competition speculation, describing his new firm as ‘a peanut that wouldn’t want to compete against a £20billion global company like WPP’.

Sir Martin has long been one of the most colourful figures on the FTSE 100.

He has frequently come under fire for his pay at WPP – about ten times that of the average FTSE 100 boss.

Until recently he received £274,000 to pay for his wife Cristiana Falcone – a World Economic Forum advisor almost 30 years his junior – to accompany him on business trips.

The twice-married father was paid more than £200million between 2010 and 2016, including £70m in 2015 alone, mostly due to a long-term incentive scheme established years earlier.

This year began with unwelcome headlines for WPP as it was revealed as a key backer of the Presidents Club annual charity dinner, where female staff complained of being harassed and groped.

Sir Martin told Radio 4’s Today programme he had ‘never seen anything like that’, as he cut all ties with the dinner.

Shareholders vented their anger at WPP’s annual general meeting last month over its handling of his departure, including failure to enforce any non-compete clause.