Metro Bank pays another £2.8m to firm owned by chairman’s wife in deal that casts doubt on its claim to be different to rivals

Metro Bank has paid another £2.8m to a firm owned by its chairman’s wife in a deal that casts doubt on its claim to be different to rivals.

It means Metro has handed almost £24m to Mrs Hill’s New Jersey company over the past seven years. 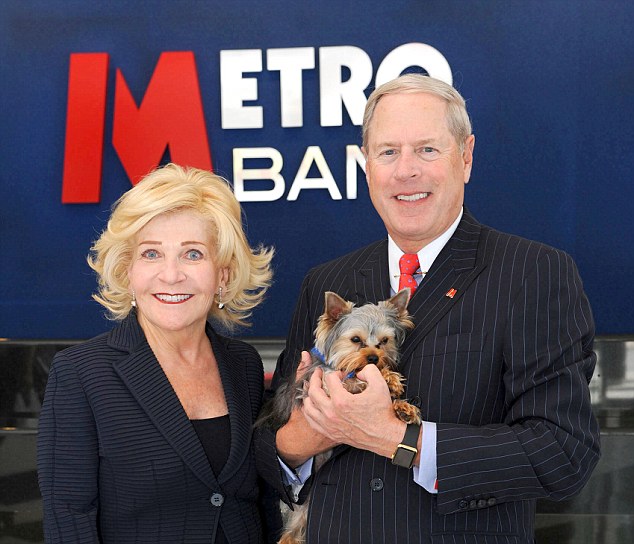 Keeping it in the family: Vernon and Shirley Hill with Sir Duffield II

The bank says the payments are for design services at branches, and no other architect could do as good a job. But shareholders and campaigners have slammed the deal.

Luke Hildyard, of the High Pay Centre, said: ‘Doling out lucrative contracts to a director’s wife’s company doesn’t do Metro Bank, or British business, any favours.

‘Metro Bank has tried to portray itself as a bank that puts consumers first rather than the self-enrichment of bankers.’

The latest £2.8m was given to InterArch for its work during the first six months of 2018.

Hill – a flamboyant former fast-food tycoon always accompanied by his Yorkshire terrier Sir Duffield II – wants to shake up British banking. But he was forced to quit the board of US lender Commerce Bancorp in 2007 following a similar outcry over deals with relations.

Hill, who is not involved in the appointment of InterArch, receives £120,000 a year from Metro to cover trips to London from his US home so he can run the bank.

A Metro spokesman said: ‘The audit committee has strong review and benchmarking processes, conducted by authoritative independent third parties, to ensure that the terms are favourable for the bank.’