M&G GLOBAL DIVIDEND: ‘Growing the fund’s income is our target’ 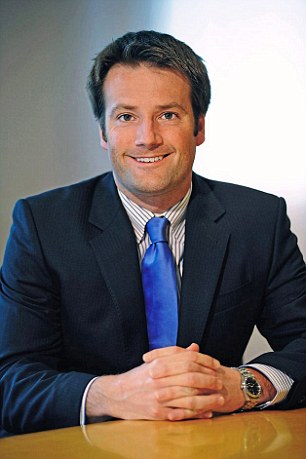 ‘Proud’: Stuart Rhodes is at the helm of M&G Global Dividend

Launched in the teeth of the 2008 financial crisis, the fund now has assets under its wing of £6billion – a big sum compared to most investment funds. An investor who supported the fund from launch would have tripled the value of their outlay.

Yet it is the relentless commitment to dividend growth that stands M&G Global Dividend apart from the crowd of dividend-friendly investment funds vying for investors’ money. Every year it has managed to grow the dividends it hands over to investors.

This is no mean feat given the fact investment funds do not have the flexibility of rival investment trusts that can squirrel away surplus income in good years to top up dividend payments when times get tough.

All the income that the fund earns from its holdings must be paid to investors almost straightaway by way of quarterly dividends.

The individual at the helm since launch has been Stuart Rhodes. He says: ‘I am pleased and proud of what has been achieved on the income front. We have stayed constant in terms of what we do and never veered off course. Growing the fund’s income is a key target.’

More importantly, he believes that the fund’s income payments can keep growing in light of a healthy dividend backdrop worldwide.

Already this year, some 29 of the fund’s 42 holdings have announced dividend uplifts, ranging from the one per cent increase declared by Swiss healthcare company Roche to the 43 per cent increase in the quarterly dividend just paid by American bank JPMorgan Chase.

Not one of the fund’s holdings has confirmed a cut while 11 have revealed dividend increases in excess of 15 per cent. 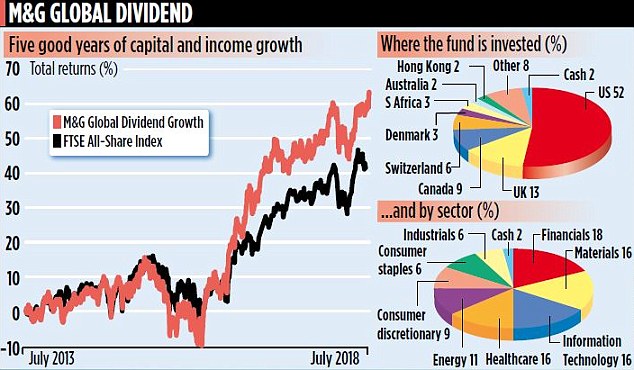 Dividend hunting: Some 13 per cent of the fund is in UK companies with tobacco giant Imperial Brands being the largest holding

‘It is a pretty healthy dividend outlook out there,’ says Rhodes. ‘Outside some of the mega stocks such as Amazon and Netflix, you can still find a multitude of stocks with yields in excess of three per cent, an ability to grow their dividends and sitting on attractive values.’

American semiconductor business Broadcom is indicative of the companies Rhodes likes. It is cash generative and has rewarded the fund with a stream of increasing dividends since a stake was taken in the company five years ago.

Whenever the shares dip in value, he likes to top up the holding. As a result, it remains one of the fund’s five biggest positions.

For the past couple of years, John Weavers has been helping Rhodes run the fund. Weavers, who also manages M&G North American Dividend, keeps an eye on Global Dividend’s holdings in the United States that amount to more than half the fund.

‘The United States has a big dividend culture,’ says Rhodes, ‘which many investors in the UK fail to recognise. There are companies out there such as Johnson & Johnson which have enjoyed 46 years of annual dividend growth. It is these companies we are seeking out.’

Some 13 per cent of the fund is in UK companies with tobacco giant Imperial Brands being the largest holding. ‘Yes, the UK remains a great market for dividend hunters,’ says Rhodes, ‘but there are plenty of other investment opportunities elsewhere in the world.’