The long, hot summer has seen people lighting up barbecues rather than phoning for pizzas and that’s bad news for Domino’s Pizza. This week the chain issued a cautious update on the UK, which accounts for over 80 per cent of turnover.

Domino’s reported a 5.9 per cent increase in like-for-like sales in the UK and Ireland for the first half of the year, which takes us up to July 1, with operating profit up 8.1 per cent to £48.2million.

The summer seems to have got off to a good start – the group says it sold a whopping 8.2million pizzas during the World Cup, but it has not yet revealed the impact of the ongoing heatwave. 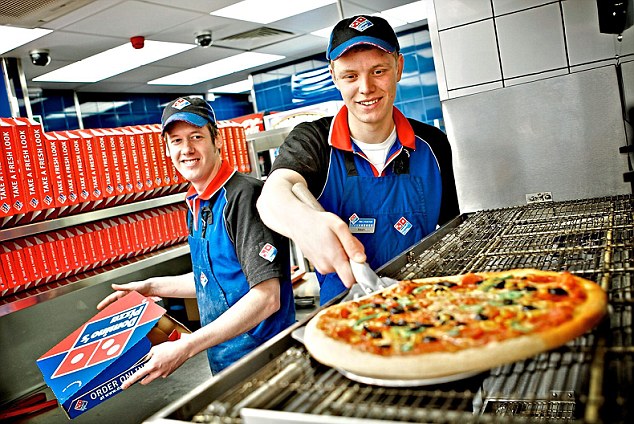 Hotting up: The fine weather may have affected Domino’s summer sales

Domino’s insists that it is on track to meet full year forecasts, but concerns have been raised about its overseas operations. While it turned a profit in Germany and Iceland, developments in Switzerland and Sweden have so far been less successful.

Overall the overseas arm made an operating loss of £1.8million in the first half. At the same time, debt has tripled to £182.1million as expansion efforts continue.

Domino’s has warned that customers are feeling the pinch as their disposable incomes remain flat. That means pricing and value becomes more important.

But Domino’s received top marks for value from 33 per cent of its customers. Convenience, too, is paramount, and the group saw online sales in the UK grow 14 per cent year-on-year, now accounting for almost 79 per cent of sales.

Concerns remain. Domino’s had expected to open 80 new stores in 2018, but has cut that estimate to 60. And just 22 new outlets were opened in the first half of the year, so it will need to ramp up progress to reach this latest forecast.

Investors let their response be known this week as £146million was wiped off the value of the firm, with the shares falling 10 per cent from 320p on the update, though by the end of the week they had recovered slightly to 297p.

Analysts at Liberum have a ‘sell’ rating on the stock. The broker thinks that the rate of new store openings will slow and is concerned about rising costs.

Midas verdict: Domino’s, like so many other fast food chains, has headwinds to battle in the form of rises in food costs and the National Living Wage, and high business rates. Current investors should hold. New investors may want to find out how a scorching summer has affected sales before deciding whether to grab a slice of the action.