Renewable energy now accounts for more than a quarter of all the power produced in the UK. The statistic is impressive but Government targets are much more stretching, with a goal to reach 30 per cent by 2020 and considerably more over the next decade.

Drax is well positioned to help drive this change. The shares are 350¼p and should increase in price as the company expands its renewable energy business and develops other, related, divisions. There is a commitment to rewarding shareholders too, through dividends, share buy-backs and one-off payments so the stock has an attractive yield for income-seeking investors.

Founded in 1967, Drax spent most of the next 45 years as a coal-fired power generation business. 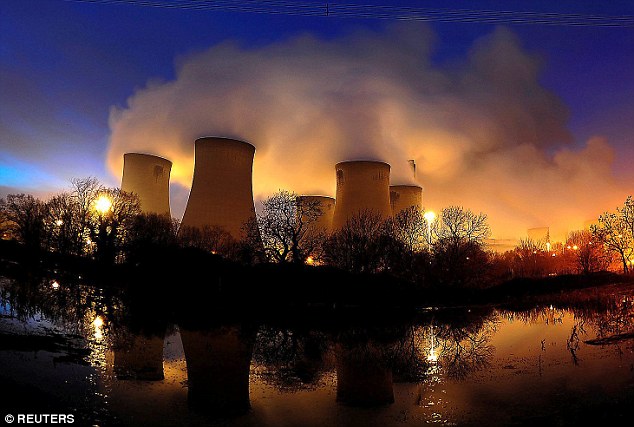 New dawn looming: Drax has switched away from coal power and will benefit from renewable energy targets

Over the past six years, however, the company has been transformed. The group has six power generating units at its headquarters in Selby, North Yorkshire, all of which used to run on coal.

Today, three run on biomass – wood pellets made from branches and twigs that would otherwise be discarded. These three units account for two-thirds of all the power that Drax generates, providing enough energy for 4.5 million homes. A fourth is converting to biomass this year, while the fifth and sixth units are expected to shift from coal to gas.

Generating energy from biomass requires huge amounts of raw materials – last year Drax used seven million tons of wood pellets, a figure that is expected to be even higher as time goes on.

Drax obtains just over 20 per cent of these pellets from its own production facilities in the US, with the rest coming from external suppliers, mostly in America but also in Europe. The group primarily uses US pellets because the scale of foresting activities is so much greater in the States than over here.

Importantly too, felled trees are replaced straight away and the amount of carbon absorbed by new saplings is significantly greater than that absorbed by older trees. This allows Drax to qualify for Government subsidies awarded to renewable energy providers.

Drax CEO Will Gardiner is keen to increase the amount of pellets that the company produces in-house to 30 per cent, both by making existing facilities more efficient and buying new ones. Progress has been encouraging to date, with production up 35 per cent last year alone. As in-house production continues to rise, the company’s profit margins should increase, particularly helpful as renewable energy subsidies are expected to be withdrawn in 2027.

The business has an energy supply division too, focused on delivering power to large, industrial users such as shopping malls and airports, as well as small and medium-sized firms. The company is the largest supplier to this part of the market after the Big Six energy groups, such as Centrica, Npower and SSE.

Not only does Drax supply businesses with electricity – almost half of which is renewable; it also advises them on how to become more efficient and, where appropriate, become renewable energy suppliers in their own right. Drax is clearly well placed to offer this advice and, if firms generate more power than they need, they can sell it to the National Grid, thereby making extra cash. This division of the group is growing fast and is expected to make substantially more headway over the next five years.

There is one further string to the Drax bow, in the form of four possible new gas-fired power stations that Gardiner is aiming to build around the UK. Biomass-fuelled power can be relied upon day in, day out but most of Britain’s renewable energy comes from wind and solar power, both of which are weather-dependent. As the country moves increasingly towards renewable power – including nuclear – there needs to be a fallback plan, to ensure that supply can meet demand, even if there is no wind and precious little sun.

The Government hopes to meet this demand through flexible power plants and storage units that will be able to fire up swiftly and generate energy on an as-and-when basis. Drax is hoping to participate in this market. It already has planning permission for two such plants and is working on permits for two more.

Earlier this year, the Government held an auction to determine energy prices for this flexible supply in 2021 and 2022 and prices were so low that Drax withdrew. The next auction will be held later this year or early next but Gardiner will only build these plants if the economics make sense. Otherwise, cash will be returned to shareholders.

Midas verdict: Drax is contributing to the UK’s renewable energy future and delivering for shareholders at the same time. A good, long-term buy, with generous dividends too.