The start of the Tour de France this weekend is sure to have aspiring cyclists across Britain reviewing their gear – and that’s good news for Halfords.

With the sun shining and a summer of sport well under way, the cycling specialist has a chance to make up for a dismal winter.

Full-year results released in May sparked an investor rout as the retailer revealed that poor weather and the weak pound had led to a disappointing final three months of its financial year, which ended on March 30, 2018. Bicycle sales were down 4.1 per cent on the previous year, though sales of electric bikes, parts, accessories and clothing were resilient, and its motor division, which accounts for nearly two thirds of sales, remained steady.

Nonetheless, they were perhaps not the maiden results that new chief executive Graham Stapleton hoped to deliver just four months into the job.

Shares plunged 16 per cent in the following days, from 388p to 325p, though they have since regained some ground to 353p.

Many investors will be waiting to hear the results of a strategic review, expected in September. But braver investors who spy an opportunity might do better to break away from the peloton now.

Halfords has made great strides in the past few years. It has recognised the issues facing the high street and is ahead of many of its peers in tackling them. Refreshed stores and a focus on customer service help differentiate the group from many other retailers. 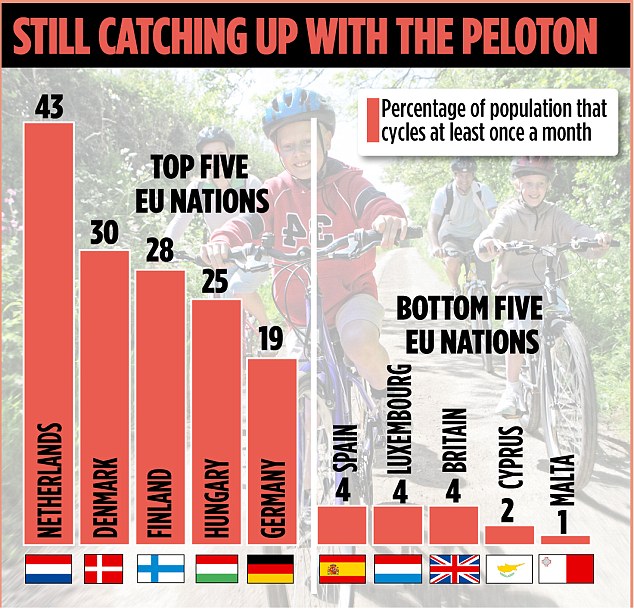 Meanwhile, online sales are growing – they were up 6 per cent last year. Crucially, some 85 per cent of those online orders were click and collect. That means Halfords has struck the holy grail of generating internet sales without cannibalising its bricks and mortar operation. When customers pick up their orders in store they also tend to make additional purchases.

And let’s not forget the nation’s growing love of cycling. According to the Department for Transport, 17 per cent of adults in England ride a bike at least once a month – that’s 7.6 million people. Some 42 per cent of those aged five or older living in England own a bike. In Great Britain as a whole, it’s estimated we cycled 3.5 billion miles in 2016.

But there’s room for growth in the market. According to the European Commission, out of 28 EU countries, only Cyprus and Malta have a smaller percentage of people who cycle daily than we do. Just 3 per cent of primary school children in England cycle to school, compared to 49 per cent in the Netherlands.

Halfords is well-placed to benefit from the potential. While the volume of bicycle sales fell last year, their value rose – in part due to the rise of the electric bike or ‘e-bike’.

There are issues to resolve along the way, of course. Pre-tax profit dipped £3.8 million to £71.6 million last year, with the company’s profit margin hit by a weaker pound, though this pressure is easing.

Hints at Stapleton’s plans for the retailer point to untapped potential, such as its huge customer database and services division. In the meantime, Stapleton seems willing to take a hit on margins to keep prices low and focus on customer service.

Midas verdict: Buy. Halfords is differentiating itself from the rest of the market with good customer service and click and collect sales. Hopefully the bout of good weather will make up for the final quarter’s lost sales. Investors will have to wait until September to see what the new chief executive’s plan is and whether he’s wearing a yellow jersey or carrying the Lanterne Rouge label of the last competitor.