In 2008, Sukh Chamdal was a chef working in the East End of London. Members of his family didn’t eat eggs, as there are restrictions in Hindu, Buddhist and Sikh dietary laws.

That meant no cakes for his four children’s birthdays, for Mother’s Day or even just for tea at the weekend. Chamdal decided enough was enough.

He received a £30,000 Government grant, teamed up with South Bank University and tasked them with developing an egg-free cake recipe. The students came up trumps, a shop in the East End fell vacant shortly afterwards and Chamdal opened for business. 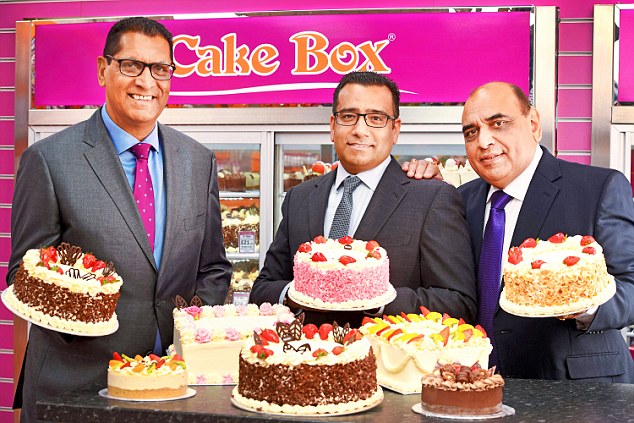 The concept proved extremely popular and within a year, Chamdal had partnered with family friend and qualified accountant Pardip Dass and set up Cake Box, a franchise business focused exclusively on egg-free cakes.

Today, Cake Box has 91 franchised stores, dotted round the country from Glasgow to Southampton. The company floated on Aim last week, the shares are 137½p and are likely to rise like airy sponges as the business grows and develops.

From the start, Chamdal focused on making his cakes as tasty as traditional recipes so they would appeal to customers with or without dietary restrictions. He and Dass also realised there was a key gap in the market – not just for egg-free cakes but for instant, personalised celebration cakes.

They homed in on that gap, with fresh cream cakes that can be personalised for particular celebrations within a few minutes. Today, this type of cake accounts for 99 per cent of group sales – from birthdays to GCSE results to unexpected World Cup scores. 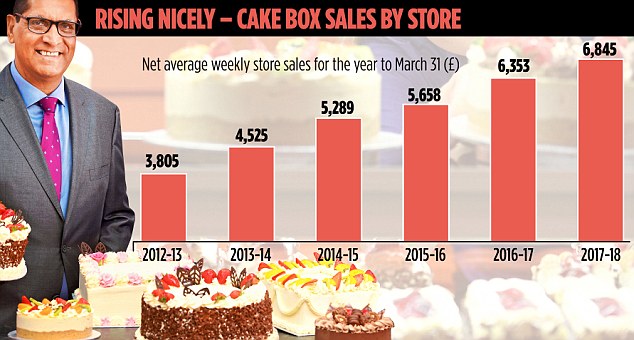 Celebrating: Sukh Chamdal points to rising sales at his 91 shops

The strategy works. Cake Box sells more than 22,000 cakes every week, at prices ranging from £18.99 to wedding extravaganzas costing £250 or more. Around 90 per cent of customers have no dietary restrictions – they simply like the cakes and the instant personalisation service.

The company does not actively advertise for new franchisees but receives around 75 applications a month, most of which are turned down, as Chamdal and Dass are looking for keen, determined store-keepers, who will drive sales and deliver top customer service.

Selected franchisees pay an upfront fee, in return for which they receive a fitted-out store, training and ongoing support. They are also supplied with weekly batches of sponge cakes, fresh cream and other essentials, such as jam and chocolate.

Growth has come partially from new store openings and partially from increased sales per store. The company intends to pursue an aggressive expansion strategy, hoping to hit 250 stores over the next two to three years. The range is expanding too, with biscuits and soft cookies coming on stream and an all-natural red velvet cake launching this month.

Chamdal and Dass made a cool £16.5 million from floating the business, but they still own 50.1 per cent of the shares so they are incentivised to perform – and there will be a progressive dividend policy. Franchisees have also been awarded shares to align their interests with investors.

Midas verdict: Who can resist fresh cream cake, particularly at a time of celebration? Cake Box believes the answer is almost nobody – and the group’s figures bear that out. Established in the teeth of the recession, Cake Box has nonetheless expanded fast and should continue to do so. As a young business, Cake Box is not without risk but it is a fun addition to a balanced portfolio. Buy – and enjoy.