MIDAS SHARE TIPS: Sitting on a pile of uranium may do you good

Yellow Cake listed on Aim in July and is hoping to profit from a rise in the price of uranium.

It takes its name from the term for powdered uranium oxide. This is a stable compound produced in all countries that mine the ore and which is then used in the preparation of fuel for nuclear reactors.

The company’s business plan is simple: buy this uranium oxide, store it, and wait for the price to go up. 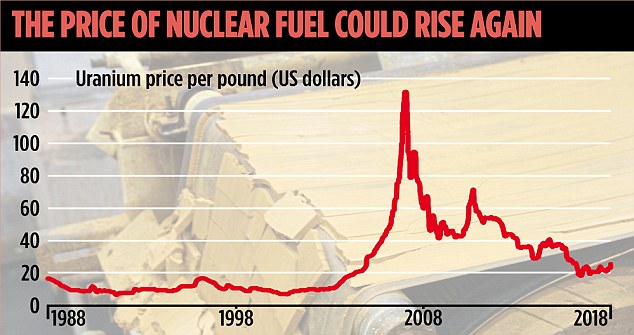 Commentators say the uranium price, at a cyclical low, looks set to recover

Prior to listing, the firm had struck a deal with the world’s largest producer, Kazatomprom, to buy up to $170million (£130million) of uranium oxide at a big discount to its trading price. That’s 8.1million pounds of the stuff, or 5 per cent of global marketed production in 2016.

Proving it can deliver on its promises, Yellow Cake has already received that shipment. This week the firm added 350,000 more pounds of uranium to the pile with a second purchase from Kazatomprom, with whom it has a deal to buy up to $100million a year for the next nine years.

Yellow Cake raised £151million on its flotation at 200p a share. It’s now at 225¼p and attracting buy ratings from analysts.

Commentators say the uranium price, at a cyclical low, looks set to recover as Japan restarts nuclear power generation and China increases its own.

Uranium fell out of favour around the time of the financial crisis and the value of the commodity has languished ever since.

Being out of favour for so long means there’s a supply deficit and, with countries looking for alternatives to fossil fuels, uranium could find itself back in favour, though experts have predicted a recovery in its price before and been wrong.

Analysts at wealth manager Berenberg have a target price of 249p on the stock and says that it represents a low-risk way to gain exposure to a compelling commodity story.

Yellow Cake also comes with a seasoned boss at its helm – the business was established by Bacchus Capital, led by Peter Bacchus, a former global head of mining at metals at Morgan Stanley.

Midas verdict: Buy. Japan has nine reactors back in action and emerging nations, including China, are planning to build new ones. For those who think the price of uranium could finally recover, this is a simple way to get exposure.