Card Factory’s interim results are not due until September, but it has already indicated a profits downgrade.

A trading update this month warned that like-for-like sales at the greetings card retailer were down 0.2 per cent in the six months to July 31. The news spooked investors and shares tumbled 10 per cent from 196p to 177½p in the following days.

Card Factory continues its rapid expansion, with 50 new stores expected this year, bringing total numbers ever closer to its eventual target of 1,200. 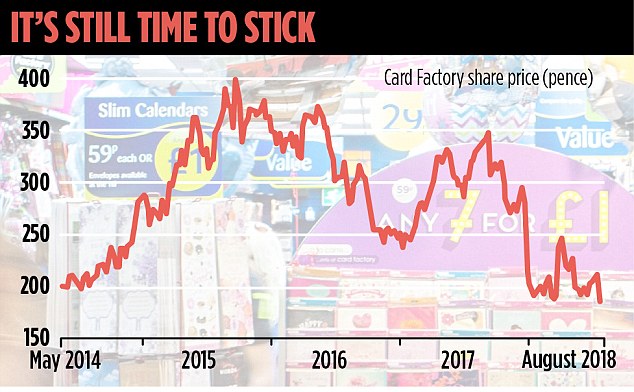 But while its high street presence grows, online sales are slipping. The firm blamed a ‘highly price competitive market’ for an 8.5 per cent fall in sales at its website Getting Personal.

In stores, sales edged up 0.7 per cent and the firm says extreme weather and an uncertain consumer will determine trading in the all-important final quarter of the year.

It now expects earnings to be between £89million and £91million, down slightly from an expected £93.5million.

Stock broker Peel Hunt says that card volumes seem to be in sharper decline than it had previously thought.

Cost-cutting carries on, but analysts at Edison believe this will only partly mitigate the effect of wage growth and other factors forcing costs up.

The travails of the high street are well known, but one might argue that Card Factory has a certain degree of protection that other retailers don’t. After all, people will (probably) always need to buy birthday cards.

The big question is whether they will be going elsewhere to buy them, as the ranges offered by superstores and discounters become increasingly all-encompassing.

Midas verdict: Hold – it’s not time to panic yet. Card Factory’s update is no catastrophe but it does set the scene for a tough second half of the year. Despite all that, the group insists it is on course and aims to return a cash surplus to investors, who are to expect a special dividend of up to 10p this year. But some say it could be the last for a while.