Last month was the third driest June in England in more than a hundred years and July looks as if it is going much the same way. That is bad news for water companies. Reservoir levels fall, usage soars and some companies, such as United Utilities, are forced to issue hosepipe bans.

Not every water company is alike, however. Severn Trent provides water to more than four million homes in the Midlands and Wales and chief executive Liv Garfield is confident that the company can cope with increased demand.

The group has worked hard to improve customer service, invest more in infrastructure and improve its environmental credentials, all of which affects investors too, as regulator Ofwat prepares to decide how much water companies can charge between 2020 and 2025. 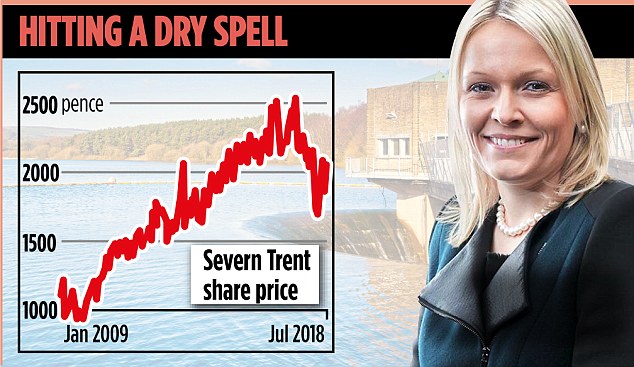 Garfield is optimistic, saying last week that the group is well prepared for the next round of talks with Ofwat and that results this year will be in line with expectations.

Despite her confidence, Severn shares have fallen from 2553p last summer to 1900p on Friday. That is still 60 per cent higher than when Midas recommended them in January 2009 at 1189p. The price has been hit by Labour’s renationalisation threats, concerns about the Ofwat review, worries about the dividend and the economic environment.

Midas verdict: These are uncertain times for privatised stocks, but Severn Trent shares now look cheap. The group paid a dividend of 86.5p for the year to March 2018 and analysts forecast 93.4p for the current year and 100p for 2020, putting the stock on an attractive yield of 5 per cent. Privatised in 1989, Severn Trent still has more than 50,000 individual shareholders. They should stick with the stock.