Warships are massing in the Mediterranean following the deadly chemical weapons attack in Douma last weekend and the military response by the US, Britain and France.

The situation is alarming, with America alone sending four craft towards Syria, including the aircraft carrier USS Harry S Truman, in its biggest show of force since the Iraq war of 2003.

The aircraft on such warships all share certain characteristics. They need to be resilient, they need to be safe and they cannot afford to go wrong. This is where Dorset-based engineering group Meggitt comes into its own. 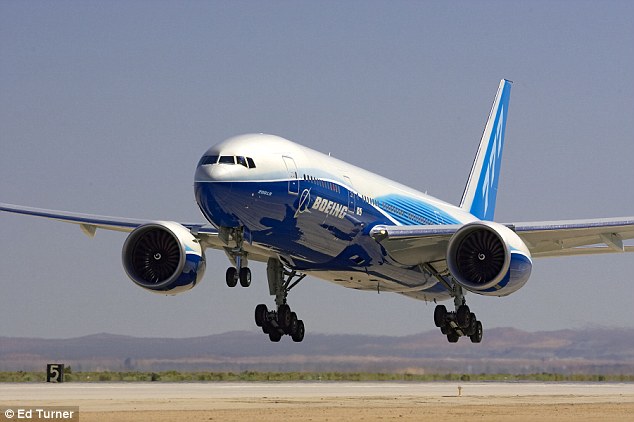 Going up: The little know Meggitt makes parts for a range of aircraft companies

Tracing its roots back to the 1850s, the company has spent more than 150 years focused on making cutting-edge products, mostly for the aerospace industry.

The group’s parts are on 22,000 military aircraft and the US is the company’s number one military customer.

Meggitt shares are 436½p, having gained more than 2 per cent last week as the backlash against Syria intensified. However the shares are still significantly lower than they were just six months ago, when the price reached 526p. At the current level, the stock is a real bargain and should deliver long-term growth.

Meggitt is best known for making wheels and brakes for aircraft. Valves, seals, sensors and other highly technical components are part of the company’s remit too – all helping aircraft to function efficiently and safely.

The group also makes highly sophisticated fire protection systems which stop fuel tanks from bursting into flames even if an aircraft is shot at or crash lands. These can and do save lives. Recently, for example, Meggitt systems allowed a US military plane to reach home from the Middle East with 22 bullet holes in the engine.

Around a third of the company’s revenue comes from the defence industry but another 55 per cent comes from civil aerospace, with the rump coming from the energy sector.

A leading supplier in its field, customers include all major aircraft manufacturers, such as Boeing, Airbus, Bombardier and McDonnell Douglas, which makes the F/A-18 Hornet Fighter jet.

Above all, the company focuses on making complex parts that are highly specialised and resilient. Crucially too, once the group has begun to supply aircraft parts, it is invariably responsible for care and maintenance.

Given that most aircraft continue to fly for several decades, that creates a significant and predictable revenue stream for Meggitt, especially as certain equipment has to be regularly replaced by law.

Nonetheless, the company has been through a turbulent patch in recent times. Large commercial plane manufacturers have been renovating their fleets, moving from older aircraft to a new generation of planes, such as the A320 and the Boeing 777.

Meggitt increased research and development expenditure in anticipation of this shift to ensure that its products would be chosen by the likes of Airbus and Boeing. The strategy has worked and the value of Meggitt products on new planes has increased by between 20 and 250 per cent.

Right now, however, the new generation is still on trial and there have been several teething problems. Once these issues have been ironed out, demand for new planes is set to be extremely strong, as more and more people travel regularly by air.

This should prove highly beneficial for Meggitt’s civil aviation business, while the outlook for the defence division is also strong. As recent events highlight, President Trump takes a macho attitude towards defence and the US military budget is rising, up about 10 per cent this year alone.

Fighter aircraft are in a bad way, after years of conflict in the Middle East, and components are sorely in need of upgrades. More than 60 per cent of F-18 warplanes, for example, were grounded last year due to lack of spare parts.

As a key supplier to the US military, Meggitt is well placed to benefit in terms of both sales and maintenance.

Meggitt chief executive Tony Wood took the helm this year, having joined as chief operating officer in 2016. He has spent 30 years in the aerospace industry so he brings plenty of experience to the job.

The group’s 2017 results were released in February and some investors were disappointed, not so much with the figures for last year but the expectations for 2018.

The company does all its business in dollars and the US currency is likely to be weaker against the pound this year so that will have an adverse effect on 2018 figures.

New accounting rules will have an impact too and the group is selling some non-core businesses.

Nonetheless, Wood has pledged to increase profit margins and cash flow over the next three years. More broadly, the company’s investment in research is paying off and the group should benefit from the steady growth in global passenger numbers.

Midas verdict: Meggitt has suffered at the hands of impatient investors but the recent fall presents an attractive opportunity for those who are prepared to be patient. Buy.

Update: Cruise ships will help steer Saga back on course

The over-50s are the fastest growing age group in the UK, expected to account for 40 per cent of the population in the next 15 years. Saga provides insurance and holidays for this generation. It has been in the business for decades and is known across the country.

When the company floated on the stock market in 2014, therefore, the shares might have been expected to go from strength to strength. They have not. The stock was priced at 185p on flotation – today it is 125p.

Most of that slump followed a profit warning in December, when 54-year-old chief executive Lance Batchelor admitted that results for the year to January 31, 2018 would be lower than expected, as the group was forced to cut the price of motor insurance to remain competitive and had to spend money flying customers home when Monarch airlines collapsed. Batchelor also admitted he needed to spend more on wooing new customers, following years of a little or no growth.

Last Thursday, the company announced its full-year figures, showing a 1.4 per cent profit increase to £190 million. They were marginally better than the City feared and there was a 6 per cent increase in the dividend to 9p, a sure sign of confidence in the future.

Batchelor is particularly excited about Saga’s holiday division – where profits are expected to soar over the coming years, as two new cruise ships, Spirit of Discovery and Spirit of Adventure, come on board.

Growth is also likely to come from ‘Possibilities’, a membership club that gives Saga customers access to special events, discounts at retailers and special offers on holidays. Having launched just a few months ago, the club already has 500,000 members, equivalent to a quarter of all customers.

On the broking side too, business has picked up since last year and should gain ground.

Midas verdict: Saga’s first four years as a quoted company have been rather shaky but now is not the time to sell. The management is determined to remedy past mistakes and, as a specialist in the over-50s market, Saga should ultimately do well. The dividends are enticing too, with the shares currently on a yield of more than 7 per cent. The group’s customer motto is ‘Keep doing’ and Batchelor is determined to take that to heart. Existing investors should hold. New investors might also consider a punt.