MIDAS UPDATE: Sell or hold OptiBiotix Health? Shares have tripled, but you’ll have to go with your gut feeling

OptiBiotix Health is at the centre of one of the hottest topics in the medical world today – gut health.

Once overlooked, the bacteria in the gut – also known as the microbiome – are increasingly seen as playing an essential role in our wellbeing, affecting our weight, blood pressure, cholesterol, skin and even our mood.

The microbiome market is estimated to be worth hundreds of millions of pounds per year and is growing at more than 20 per cent a year. 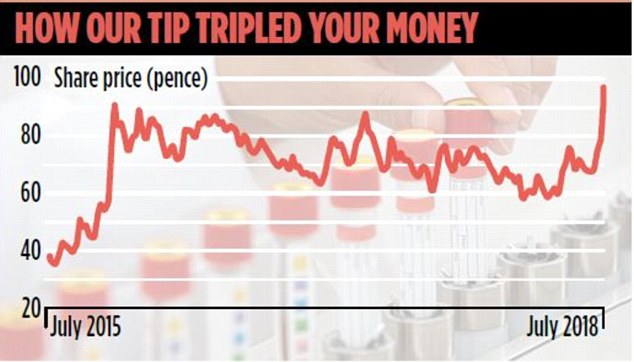 OptiBiotix shares have tripled to 96½p since July 2015

OptiBiotix is a minnow in the field, but it is making strides. First recommended by Midas in July 2015 at 33½p, the shares have tripled to 96½p, as the firm evolves from a researcher to a commercial business.

Run by microbiologist-turned-entrepreneur Stephen O’Hara, it focuses on products that alter gut bacteria in such a way as to promote weight loss, reduce blood pressure and lower cholesterol.

Trial results have been positive and the firm has signed 19 deals in the past two years with dairy groups, food producers and drug companies.

Some firms are looking at putting OptiBiotix no-calorie sweetener in yogurts or muesli. Others intend to put its products into capsules or tablets for cholesterol reduction. Each transaction is different but all are set to boost sales at OptiBiotix in the next two years and beyond.

OptiBiotix, which is valued at £88million, also owns 42 per cent of SkinBioTherapeutics, which listed on Aim last year and is valued at £25million.

Midas verdict: OptiBiotix has come a long way in the past three years and shareholders have benefited. But the firm is still at an early stage and risks remain. Cautious investors may choose to sell down their holdings and take some profit. But they should not sell out completely as O’Hara is highly ambitious – and a major shareholder.