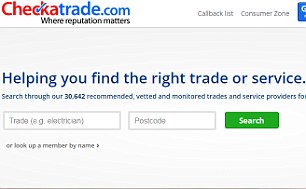 The owner of Checkatrade has hired O2 high-flier Mike Fairman

The owner of Checkatrade has hired O2 high-flier Mike Fairman to run the website which puts homeowners in touch with tradesmen.

He has now poached Fairman – who calls himself ‘the Gaffer’ – from mobile phone network Giffgaff, which uses the O2 network and is owned by O2 parent Telefonica. The appointment could be announced this week.

HomeServe has grown Checkatrade’s network of tradesmen by 6,000 tradesmen to 29,000 in the first year.

He said last week he wanted to grow his business into a British version of US digital giants Booking.com – which is worth over £77 billion – Airbnb or TripAdvisor.

Harpin has clashed with tradesmen over charges for using Checkatrade.

But he has since offered concessions and has insisted he intends for them to share in the site’s success.