Each week, Money Mail rounds up some of the week’s personal finance news. Here, it updates on broadband prices, rising rents and £169million worth of old £1 coins still in circulation, among other stories. 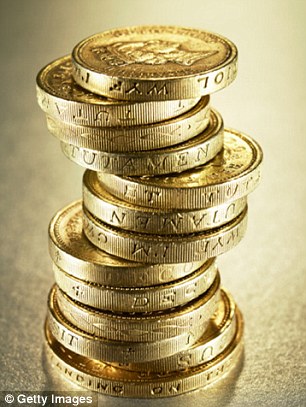 There are still £169million of old £1 coins in circulation

Plusnet has promised not to hike broadband prices mid-way through customers’ contracts. In addition to the fixed-price guarantee given on taking out its copper, fibre and Fibre Extra packages, subscribers will be alerted just before the agreement ends so they know to move to a cheaper deal. The new rules only apply to customers who signed up after August 8 this year.

There are still £169million of old £1 coins in circulation nine months after they ceased to be legal tender, according to The Royal Mint. The new 12-sided £1 coin was introduced on March 28, 2017 in a bid to clampdown on counterfeiting. It is estimated about one in 30 of the old, round £1 coins are fake. The old coins can still be taken in to your bank and traded for new ones.

Rents are expected to rise 15 per cent in the next five years, with East Anglia and the South West seeing the biggest increases, new research suggests. The Royal Institution of Chartered Surveyors says this is because fewer landlords are renting out properties following a clampdown on buy-to-let investing.

Crooks are targeting NatWest customers, Action Fraud warns. The national cybercrime monitoring service says more than 300 customers of the bank have reported receiving emails asking them to verify their full name and mobile number by clicking on a link. Report these emails to Action Fraud on 0300 123 2040.

Those aged 65 and over are least likely to check their bank account regularly, according to Office for National Statistics research. Just 43 per cent said they looked at their account once a week, compared to 78 per cent of 25-34 year olds.

Holidaymakers have voted Thomas Cook, First Choice and TUI (formerly Thomson) as the worst package holiday providers. Consumer group Which? asked 5,000 customers in the UK to rate companies on areas such as value for money, customer service and how close the brochure description was to the reality. Thomas Cook came bottom of the table. Although its holidays worked out as the cheapest per day, customers gave the firm just three stars for value. British Airways was voted top.