More than 332m people are expected to watch programmes via online streaming service Netflix this year, as it ramps up its attack on traditional broadcasters.

The US tech giant is set to announce its second-quarter results today, with Wall Street analysts predicting it will have added more than 6m subscribers during the three months. 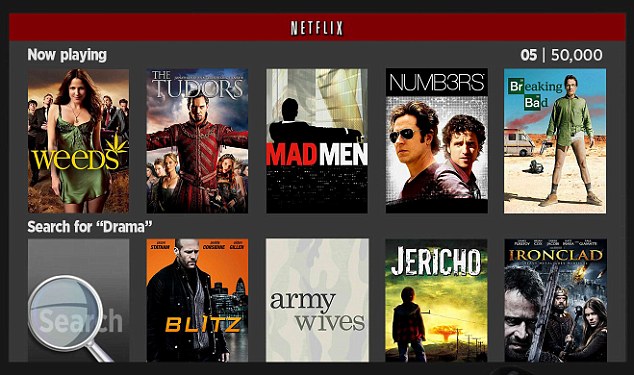 Booming: Netflix predicted it would have 131m subscribers worldwide by the end of the second quarter

If it keeps up that pace it will have added more subscribers in one year than rival Sky’s entire customer base of around 23m.

Netflix predicted it would have 131m subscribers worldwide by the end of the second quarter, with its total audience believed to have rocketed by more than a fifth in the past year thanks to billions spent on blockbuster original shows such as House Of Cards and Orange Is The New Black.

Earlier this year it overtook Disney to become America’s most valuable media company.

He said: ‘If you look at it, there are 600m broadband homes outside the United States and China. We have them hitting 300m [subscribers] in about 2025.

‘The company has done an incredible job changing the whole media landscape.

‘They have changed the world of entertainment.’

Emarketer analysts said there were roughly 2.5 viewers per Netflix subscription, taking its estimated audience this year to 332.5m worldwide.

In the US it was estimated to have 147.5m viewers – much more than any cable providers, such as Universal-owner Comcast with 22m. 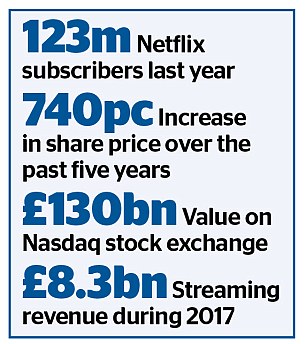 In Britain, separate research by the Broadcasters’ Audience Research Board found households were flocking towards the new providers.

Paid-for on-demand video services accounted for almost a fifth of television viewing in the UK in 2017, it said.

About 8.2m households were thought to have a Netflix subscription while 4.3m have rival service Amazon Prime.

The surge comes as many TV providers are scrambling to match the online platforms, with many also opting to strike deals with the streaming services to share content.

The Sunday Telegraph yesterday reported that Amazon was about to launch its own smart television set, in a bid to corner the market. Disney is preparing to launch its own streaming service soon and its proposed tie-up with 21st Century Fox has been presented as a deal that would give it the firepower it needs to take on technology companies.

Last year, Netflix users were estimated to have watched 1bn hours of video every week.