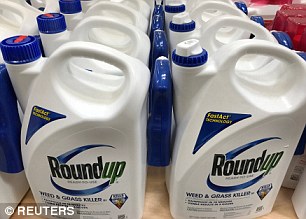 More than £8billion was wiped off the value of the German company behind Roundup after a court ruled the weedkiller caused cancer.

Shares in pharma and chemicals group Bayer fell 11 per cent on the stock market in Frankfurt – slashing its value from £78billion to £69.5billion.

The slump came after Bayer’s US subsidiary Monsanto was ordered to pay £226million damages to school groundsman Dewayne Johnson who claimed its weedkillers gave him non-Hodgkin’s lymphoma in 2014.

The firm is appealing the verdict, insisting glyphosate, a key ingredient in its weedkillers, is not carcinogenic.