Morrisons leading the fight back against Aldi and Lidl

Morrisons has rewarded investors with a £238million payout as it ramps up British produce sales.

City analysts warmly welcomed the 4p-a-share special dividend which has boosted the full-year total dividend by 86 per cent – to 10.09p a share.

Potts said the move was ‘an expression by the board of its confidence in the future’. 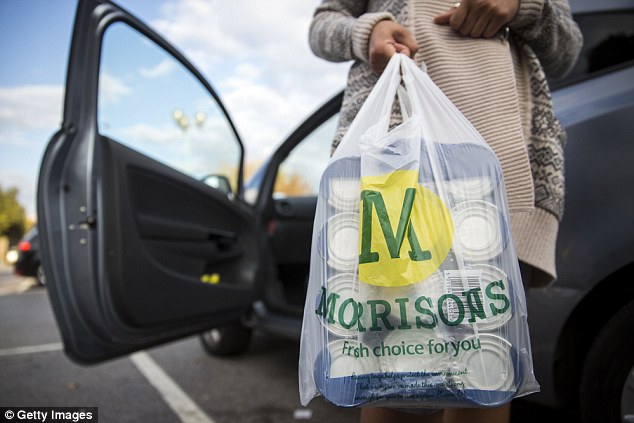 Since taking over, Potts had led a remarkable turnaround for the chain – particularly in fighting off the threat of German discounters Aldi and Lidl.

Morrisons reported sales growth of 2.8 per cent last year, bumping its profits up 11 per cent to £374million.

The supermarket has been increasingly focused on selling local produce, with 68 per cent of its customers saying they preferred to buy British.

It has agreed deals with 300 new local suppliers to sell products such as Welsh ice cream and Yorkshire gluten-free pies in its supermarkets, and bought British manufacturers like free-range egg supplier Chippindale Foods.

It filled its shelves with an additional 750 locally produced items last year. 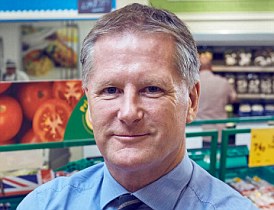 Few had heard of David Potts when he became chief executive in 2015.

But the 60-year-old father of two has transformed the ailing store.

He focused on quality and local produce. But he also sealed a series of tie-ups to boost sales.

And he teamed up with Amazon to deliver groceries within an hour, added hand car washes and revived the Safeway brand.

The supermarket also stocks a range of milk which sees customers pay an extra 10p per litre to be shared among the British farmers it works with.

Morrisons has contributed an additional £9million of income to farmers since the scheme launched in 2015.

Local products now account for two-thirds of Morrisons’ sales and Potts said they were important to customers, who perceive them to be fresher.

‘As we differentiate the business we see our Britishness being in tune with what customers want,’ he said.

He added: ‘It’s an important part of the journey for the recovery of this company.’

Under the stewardship of former shop assistant Potts, 60, Morrisons has undergone a transformation to see it post two consecutive years of growth since he joined in 2015.

The supermarket looks set to come out as the strongest performer among its rivals Tesco, Sainsbury’s and Asda in 2017 after its high-end ‘Best’ range helped it achieve the strongest sales among the Big Four grocery retailers over Christmas.

The quartet have been fighting to hold on to their customers as German discounters Aldi and Lidl make inroads, but Potts’s appointment helped end four years of declining sales.

Morrisons said it would open three supermarkets after two years of no openings.

The good news was welcomed in the City.

Investment bankers Shore Capital said that the strategy to turn around the supermarket has been ‘patient and detailed’, and that it was carried out with ‘considerable pace and guile’.

‘Morrisons, under the stewardship of David Potts, has come a long way from the distressed situation that the business found itself in 2015,’ it said.