Mortgage lenders cut rates for those with a 5% deposit


Less than a month after the Bank of England hiked the base rate to 0.75 per cent, mortgage lenders are continuing to slice the rates on deals offered to borrowers.

Among a spate of price cuts, a number of new deals have launched for borrowers looking to buy with a 5 per cent deposit. 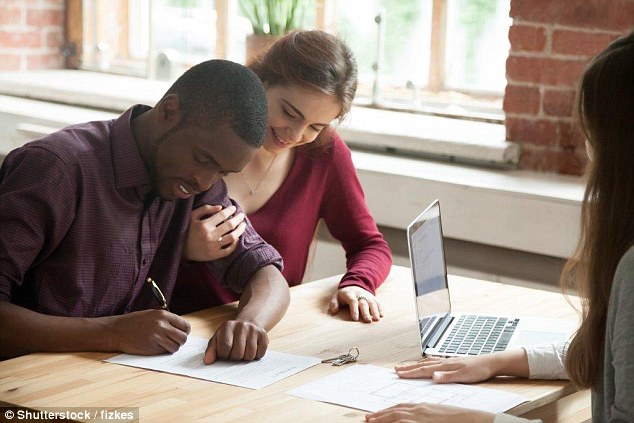 Five-year fixes are also cheaper than a year ago with the average now sitting at 4.30 per cent

Rates at 95 per cent loan-to-value have never been lower – despite the second rise in the base rate in 12 months.

According to Moneyfacts data the average two-year fixed rate on a 95 per cent mortgage is now 3.95 per cent compared to the 4.18 per cent average last year.

Five-year fixes are also cheaper than a year ago with the average now sitting at 4.30 per cent for those with a 5 per cent deposit compared to 4.51 per cent this time last year.

The cheapest two-year fix for those looking to buy with just 5 per cent to put down is now a rock bottom 2.99 per cent with a £999 fee from Nottingham Building Society.

Those with a 5 per cent deposit looking to fix for longer can get a five-year deal at just 3.29 per cent from Sainsbury’s Bank, which offers £500 cashback as well.

Rachel Springall, of personal finance site Moneyfacts, said: ‘First-time buyers are as an essential demographic for lenders to entice, which is why there has been positive activity when it comes to mortgage pricing and creating an abundance of choice for those with a limited deposit.’

Peter Gettins, of mortgage broker London & Country, added: ‘We’ve seen significant and continuing improvement in the high LTV sector for a while now.

‘Looking back at two-year fixes a year ago there were only a handful below 3.5 per cent and most of the big high street names were north of 4 per cent.

‘Today it’s just about possible to get a two-year fix under 3 per cent and there are many major lenders under 3.5 per cent. Nationwide, for example, now has 3.24 per cent whereas this time last year it was 4.09 per cent.

‘And of course that’s in the face of two base rate increases.’

The figures tally with those published by the Bank of England in its August Inflation Report, which revealed that two-year fixed mortgage rates at 90 per cent LTV have fallen by 0.41 per cent between May 2016 and May 2018 – a period which saw the base rate rise.

By contrast, two-year fixed rates at 60 per cent LTV – for those with 40 per cent equity or deposit – rose over the same time frame, by 0.09 per cent.

Gettins said: ‘A year ago it was possible to get fixes in the 1 per cent bracket and Yorkshire BS even had 0.99 per cent [at low LTVs], whereas today you do well to get under 1.50 per cent.’

It suggests that lenders are focusing their attention on higher risk lending, perhaps in a bid to increase the profits at a time when it’s been increasingly hard to make money on mortgage lending.

Gettins said: ‘We’ve seen other developments too – it feels like more lenders are offering incentives like free valuations and cash backs (though that’s been growing for some time).

‘Lenders like Sainsbury’s and West Bromwich have come into the 95 per cent space, and recently Virgin opened up 95 per cent LTV to remortgages.

‘So that points to far greater competition and appetite from lenders for this kind of business. While higher LTV products surely still generate the most margin, I don’t think the cuts we’ve seen are consistent with a huge money-grab. If anything those margins will have reduced, but are still important to overall profitability.’

Writing in the Inflation Report earlier this month Bank of England economists noted: ‘The strength of competition in the retail banking market in the face of relatively subdued demand for household credit has pushed down lending rates in recent years, with lenders reducing margins on some products to maintain market share.

‘Lenders noted in recent discussions that, although further compression as a result of competition was unlikely, margins on lending were not expected to pick up materially.’

Experts sought to allay concerns that lenders are pushing higher risk mortgages out to borrowers however.

‘While there may be concerns raised that lenders are taking on more risk, it is worth remembering that borrowers face more affordability checks than years ago,’ said Springall.

‘The market can shift depending on demand though, so if house prices rise or if the cost to get a mortgage increases, it could price out many first-time buyers looking to get on the property ladder and cause stagnation.

‘Therefore, borrowers would be wise to take advantage of Government initiatives such as the Help to Buy Isa to boost their deposit by 25 per cent and also consider any window of opportunity to get their ideal first home.

‘It remains to be the case that if borrowers can stretch themselves to a 10 per cent deposit then they will find much more choice and lower rates available too.’

Sainsbury’s Bank offers the best-buy five-year fixed rate at 2.30 per cent for those with 10 per cent to put in. It comes with a £745 fee and monthly repayments of £790 on the same loan.