Mortgage payments are at some of the most affordable levels seen in the last 20 years despite the Bank of England base rate rise in November.

Typical home loan payments accounted for 29 per cent of homeowners’ disposable income in the last three months of 2017, data from Halifax shows. This compares to 48 per cent in summer 2007 and has been driven largely by historically low mortgage rates. 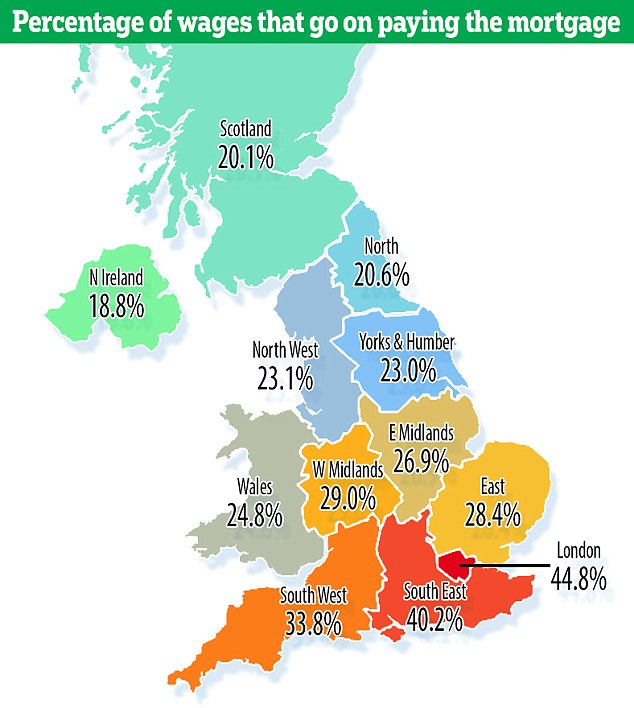 Regional differences: Mortgage payments in London are the equivalent of 44.8% of disposable income, compared to 18.8% in Northern Ireland

Halifax adds the 29 per cent figure is the lowest it has recorded at the end of a full year in the last decade. The figure has been lower though more recently: in the second quarter of 2013 it dipped to 26.3 per cent.

Before that it is back to 1996, when 23.6 per cent of disposable income was spent servicing the monthly mortgage.

Regionally, mortgage payments are at their lowest as a proportion of disposable earnings in Northern Ireland at 18.8 per cent.

The country suffered a mini house price boom leading up to the financial crisis – in the last three months of 2007, mortgages soaked up a huge 63.1 per cent of disposable incomes in Northern Ireland, more than any other area.

In Scotland, property owners spend a typical 20.1 per cent of incomes on their home loan and in the North 20.6 per cent.

Incomes appear to be most stretched in London and the South East, with 44.8 per cent and 40.2 per cent siphoned off to pay mortgages – but still far lower than the proportion recorded in 2007.

However potential mortgage rate increases makes those in the South East potentially more vulnerable to base rate hikes, the data suggests.

The Bank of England is expected to keep interest rates unchanged at 0.5 per cent next week, but the meeting will be watched closely amid expectations over another hike in May.

Governor Mark Carney has already warned borrowers that rates will need to rise ‘somewhat earlier and by a somewhat greater degree’ to get inflation back on target after stronger-than-expected growth in the economy.

The Halifax findings are based on mortgage payments for a new borrower, including both first-time buyers and home movers.

Average house prices and mortgage rates were used for someone with a 30 per cent deposit.

The findings that mortgage payments take up around 29 per cent of wages is well below the long-term average of 35 per cent, Halifax said.

Andy Bickers, mortgage director at Halifax, said: ‘In recent months we have seen the number of first-time buyers and home movers purchasing a home with a mortgage bounce back towards 2007 levels.

‘Mortgage payments have become a much smaller proportion of disposable income across most of the country will also support a heathy market with more choice and opportunity for buyers/borrowers.’ 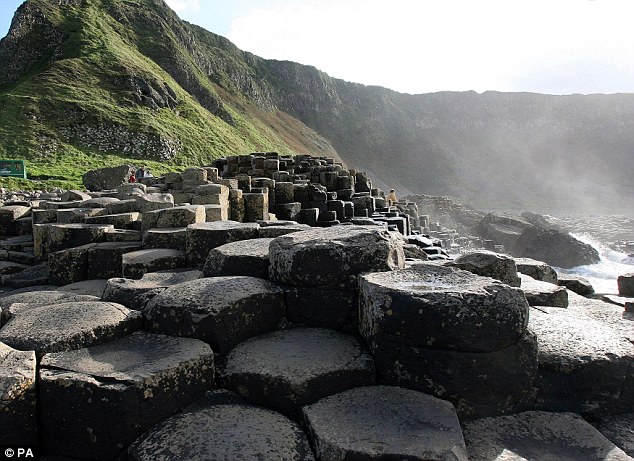 Northern Ireland: It is the cheapest region when it comes to comparing disposable income with mortgage payments

The 10 least affordable areas are predominantly in London and the South East.

Brent and Haringey are the least affordable places in the country with average mortgage payments on a new mortgage loan accounting for 61 per cent of average local disposable earnings.

This is followed by Harrow at 58 per cent and Elmbridge 56 per cent.

While the comparison of mortgage affordability over the last 10 years shows a vast improvement, when looking only over a five-year period, affordability – on this measure – has actually deteriorated.

As a result, 89 local authorities have seen mortgage affordability as proportion of disposable earnings rise by at least five per cent.

In Elmbridge for instance, this measure has increased from 34 per cent to 56 per cent with an average of 22 per cent more disposable earnings devoted to mortgage payments.

However, there are areas where mortgage affordability has improved since 2012. In Torridge, North Devon, this ratio has fallen from 45 per cent to 35 per cent and similarly in Ceredigion, 40 per cent to 31 per cent.

Halifax used Bank of England and Office for National Statistics figures for its calculations.