Mortgage prisoners: The family told they can’t buy a smaller house and switch to a CHEAPER loan 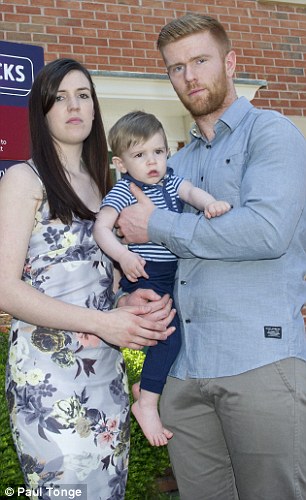 When new parents Anne and Carl Winter found a three-bedroom semi in a quiet street in Coalville, Leicestershire, they thought it would be the perfect home for their family.

The little house, which was on the market for £165,000, would provide a welcoming home for the couple and their baby son Danny.

Most importantly, it was cheaper than their current home — meaning they could slash their outgoings by around £550 a month as the cost of raising their child started to bite.

The couple thought their bank, Santander, would have no problem allowing them to transfer their home loan to the new house, as it would free up more disposable income.

But, much to their bewilderment, the bank used lending rules to throw out their application.

The young couple, who have never missed a repayment, feared they would face a £7,700 penalty to repay their loan early if they moved and found another lender.

The only alternative — staying put — meant struggling along with higher repayments than they would like.

They are among 30,000 borrowers dubbed mortgage ‘prisoners’ because they are trapped on expensive deals.

A report by the Financial Conduct Authority found that banks routinely tell these customers that they cannot ‘afford’ to switch deals — even though it would slash their repayments.

The City watchdog wants lenders to stop putting up these bizarre barriers and allow customers to switch when they aren’t having trouble repaying their debts.

Anne, 22, says: ‘All we wanted was to move to a cheaper house, reduce our bills and debts. We can’t understand the logic — why is Santander forcing us to carry on struggling?’

Like many young couples, the Winters, whose names we’ve changed, were keen to get on to the housing ladder as early as possible.

In 2014, after years of saving, they scraped together an £8,450 deposit for a new-build in a village in Derbyshire close to Burton-on-Trent. They needed a £160,550 mortgage and Santander agreed to lend to them. 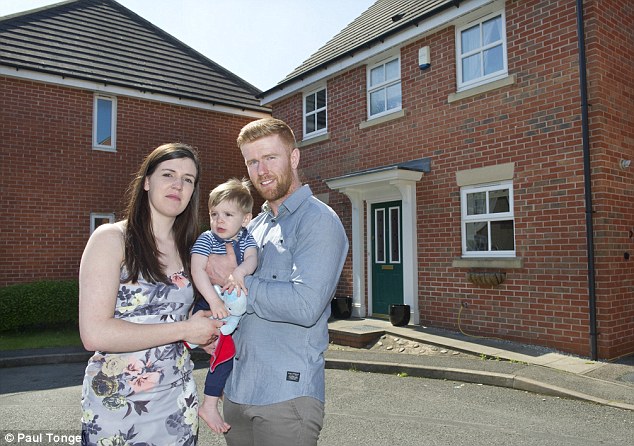 But when Danny arrived a year ago, the couple found themselves in tougher financial straits. Faced with the cost of a nursery place, Anne had to give up her £17,000-a-year job at the council to look after her son.

The couple had around £20,000 in credit card debt, from their wedding in 2016 and for a training course for Carl, 24, to qualify as a lorry driver.

They were paying off this debt each month on a 0 per cent interest credit card.

They have excellent credit records but, after a while, decided it would be prudent to move to a cheaper home and cut their bills.

Moving would free up equity to pay off their credit card debts, saving them another £350 a month.

Initially, a Santander adviser said they could move their mortgage. They were told there would be a modest early repayment charge to break their five-year fixed term early.

The Winters pressed ahead and found a buyer. But a few weeks later Santander rejected their application. The bank said the couple had failed affordability checks introduced in 2014 by the City watchdog.

Santander rejected the Winters’ appeal telling them to get debt advice

Under these regulations, known as the Mortgage Market Review, banks weigh up applicants’ monthly expenditure and income before deciding whether to offer a mortgage.

Even though the Winters’ outgoings would fall, Santander wouldn’t countenance a new deal of any kind.

Anne found a part-time job and Carl, 24, provided a letter from his employer showing he will soon get a £10,000-a-year pay rise.

Santander rejected the Winters’ appeal anyway, telling them to get debt advice. It said if they want to move, they will have to pay a £7,747 penalty and find another lender.

Amid the delay, the semi they hoped to buy has been snapped up. Santander says the adviser who gave the Winters incorrect information will receive further training and has offered £100 compensation.

When regulations were less strict, borrowers such as Carl and Anne would usually have faced no trouble in finding a new loan. But following the shake-up — designed to stop a repeat of the 2008 financial crisis — banks now conduct strict affordability checks.

This can mean you get rejected for a new deal even if your finances are exactly the same as when you were first accepted for the loan.

Worse, many mortgage prisoners find that other lenders turn up their noses at their business. As a result, they end up stuck on their existing lender’s standard variable rate, which is usually extremely expensive.

In its report, the FCA admits its new rules have contributed to the problems mortage prisoners face.

Ray Boulger, of mortgage broker John Charcol, says: ‘This is a classic example of a couple doing something sensible and being thwarted by the system. How is this treating customers fairly?’

A Santander spokesman says the Winters’ finances have changed ‘significantly’ since they took out the mortgage. He adds: ‘We will always look to ensure that our lending will not lead to problems with debt. We believe the new property is outside the Winters’ future affordability.

‘We would be happy to review this case again to try to support them in finding an affordable solution.

‘In this particular circumstance we would be happy to look at waiving the early redemption penalty if the customer decided to move to another provider.’