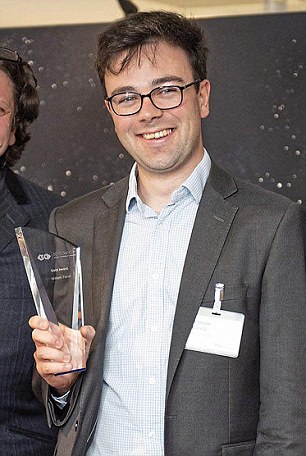 Accolade: William Turvill with his award

MHP’s 30 To Watch awards gathered 30 of the country’s most talented and influential journalists under the age of 30 at the Oxo Tower in Central London on Wednesday night.

William, who joined The Mail on Sunday last year, won the Gold award after coming top in the Financial Journalist category.

The judging panel noted ‘William’s strong writing ability, and were particularly impressed by his breaking of news stories across a range of sectors’.

They singled out his ‘in-depth reporting of RBS’s settlement with the RBoS Shareholders’ Action Group’ which has included exposing the group’s links to a fraudster.

He has also covered numerous other topics including a series of articles highlighting the impact of Brexit on businesses.