Most powerful woman in the City quits: Lloyd’s of London chief Inga Beale in shock departure

The boss of Lloyd’s of London is stepping down amid a radical shake-up of the 330-year-old insurance market under its new chairman.

Dame Inga Beale, the most powerful woman in the City, will leave next year having become the first female chief executive of the group in 2014.

The 55-year-old, a diversity campaigner who came out as bisexual in 2008, was paid £1.3m last year, taking her earnings since becoming chief executive to £5.9m. 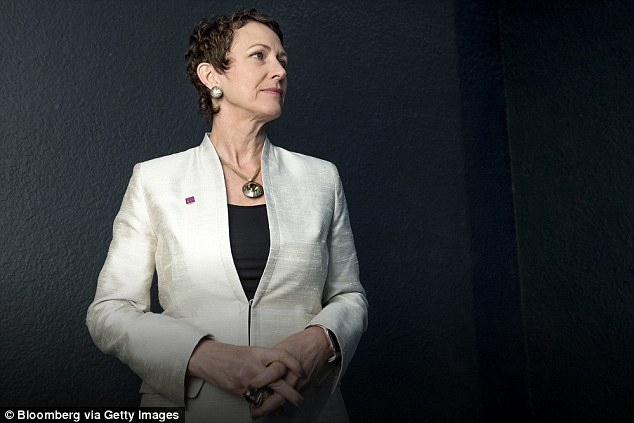 The search for her replacement will be led by chairman Bruce Carnegie-Brown, who has set out radical plans to modernise Lloyd’s since succeeding John Nelson a year ago.

It is thought that the 58-year-old former banker wants to bring in his own chief executive to run the insurance market to boost its competitiveness and make it fit for the future.

Carnegie-Brown has already banned alcohol during working hours – spelling the end of daytime drinking and boozy lunches for staff.

He is also overseeing a technological revolution that will force more business to be done electronically in a bid to drag the insurance hub into the 21st century.

The move comes amid fears that an over-reliance of paperwork is pushing up costs and making Lloyd’s less competitive than its rivals.

Lloyd’s is due to open an office in Brussels in the coming weeks, giving it a presence in the European Union following Brexit.

Beale’s looming departure follows that of finance chief John Parry, who announced he was leaving last month after 17 years at Lloyd’s.

Carnegie-Brown paid tribute to Beale’s stewardship of Lloyd’s, which is known as one of the three pillars of the City along with the Bank of England and the London Stock Exchange.

‘In her five years at Lloyd’s, Inga has set in motion a series of changes aimed at modernising the market and making it more efficient and inclusive,’ he said.

‘Her boldness and persistence have generated the momentum required to bring about real change. I have very much enjoyed working with Inga, and I am grateful for the support she has given me in my first year as chairman.’

Beale, who is married to Swiss jewellery designer Philippe Pfeiffer, said: ‘The decision to leave has been a tough one and when the time comes I will miss the energy, innovative spirit and expertise that I come across every working day.

‘Leading Lloyd’s is an honour and I am proud to have played a part in ensuring that it remains relevant and fit for purpose for the future. The world trusts Lloyd’s to be there when it matters the most and I believe it is well placed for the next 330 years.’ Beale oversaw one of the toughest years for the Lloyd’s insurance market in a decade last year.

The group posted a £2 billion loss in 2017 – its first loss of six years –after a string of national disasters including hurricanes, earthquakes, flooding and wildfires rocked the insurance industry.

Before joining Lloyd’s, Beale was chief executive of insurance company Canopius, having previously been global chief underwriting officer at Zurich.

Beale was made a Dame in the 2017 New Year honours.

In 2015, she topped a list of 100 leading LGBT executives, the first openly bisexual person to do so.

A Lloyd’s spokesman said: ‘Inga’s leaving date will be confirmed in due course and the search for her successor is underway.’

RISE OF INGA THE WINGER