British drivers are wasting millions on replacement driving licences as nearly one million were reported lost, damaged or stolen in 2017, data released by the Driver and Vehicle Licensing Agency showed today.

With a replacement licence costing £20, drivers have had to fork out close to a collective £19million on new motoring IDs last year alone.

Misplacing licences was one of the main reasons for replacement requests as 80 per cent of motorists carry their plastic card with them each day – but the DVLA says you should leave it somewhere safe at home. 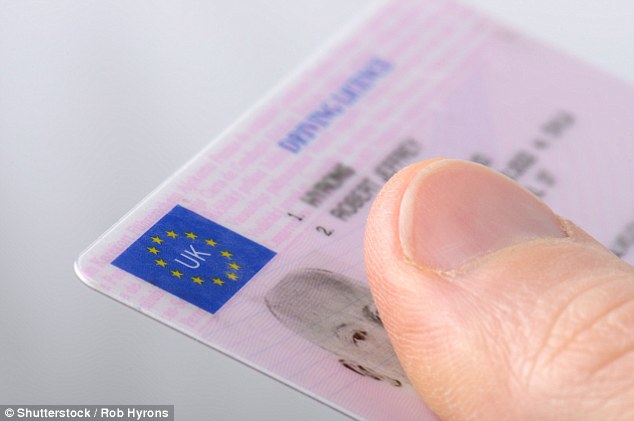 Where do you keep yours? Some 8 in 10 drivers say they carry their driving licence with them every day, but the DVLA said you should leave it at home after providing stats showing motorists spent almost £19 million replacing lost and damaged licences last year

Official records released this week showed that a total of 931,527 applications for replacement driving licences were made between 1 January 2017 and 1 January 2018.

According to the most recent DVLA stats, there are around 37.5 million active licence holders in the UK.

That means around 3 per cent of all drivers in the country either lost or snapped theirs last year. The total bill for this amounts to £18.6million.

To understand why so many replacement licences have been requested in the previous 12 months, the DVLA surveyed drivers about where they keep their ID cards.

Where do you keep your driving licence?

Eight in 10 Britons said they carry it with them. However, the figures showed that habits were different across ages and location.

Younger drivers are more likely to choose to carry their licence with them (87 per cent) compared to older motorists who are tend to keep their ID somewhere safe at home.

Unsurprisingly, it was 16 to 24 year olds who had to apply for the most replacements – 82 per cent of those surveyed.

Dudley Ashford, drivers service manager at DVLA, said drivers shouldn’t feel the need to carry their licences with them as it’s not a legal requirement, and suggested that motorists keep them filed someone safe instead of putting them in their wallets.

‘While you don’t legally have to carry your licence with you when driving, you need to have a licence in case you need to prove you can drive,’ he said.

‘So we’d recommend keeping your licence safe and secure at all times – perhaps storing it in one safe place along with other important documents.

‘Hopefully you won’t have to replace your licence but if you are going to carry it around with you and you then lose it, it’s always quicker to apply for a new one online.’

A driver pulled over by Thames Valley Police in Milton Keynes, Buckinghamshire, on Sunday was found to be carrying a driving licence with them… but it displayed the ID of none other than TV cartoon character Homer Simpson.

The road police unit for the force showed a snap of the ID on Twitter on Monday.

In addition to the driver carrying a fake licence, the car was also found to be uninsured, the post said.

Police seized the vehicle and have consequently reported the driver to court for both offences. 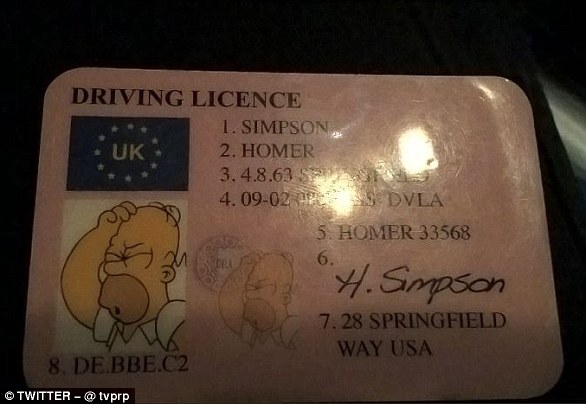 D’OH! Thames Valley Police posted a picture of the fake licence on Twitter on Monday

A quick straw poll of the This is Money team found that just two in nine of us leave our driving ID at home, with the one cautious motorist carrying a photocopy of their licence instead.

Since the DVLA launched an online service for replacing lost or damaged licences, 27 million transactions have taken place.

The most popular reason for using the service is to change the address that’s displayed.

According to research conducted by comparethemarket.com last year, around 1.5 million registered drivers have the incorrect address on their driving licence.

Failure to display the correct home details on your driving ID can land you with a £1,000 fine.

YOU’RE NOT LEGALLY REQUIRED TO CARRY YOUR LICENCE

If you’re stopped by the police,an officer can ask to see your driving licence, insurance certificate and MOT certificate.

If you don’t have these documents with you, you have seven days to take them to a police station.

You’re only breaking the law if you don’t show the requested documents within the allocated seven day period.