Motorway services charging up to £14 more than nearby stations

Motorway service stations are to face an official probe into rip-off fuel prices.

As millions of motorists prepare for the Easter getaway, Transport Secretary Chris Grayling has written to competition watchdogs to ask for an investigation into sky-high motorway petrol and diesel prices.

The widening gulf in the cost of fuel means filling a family car on the motorway can cost up to £14 more than refuelling at a nearby forecourt.

Mr Grayling said drivers feel ‘exploited’ and warned lives could be put at risk if motorway motorists who are reluctant to fill up run out of petrol. 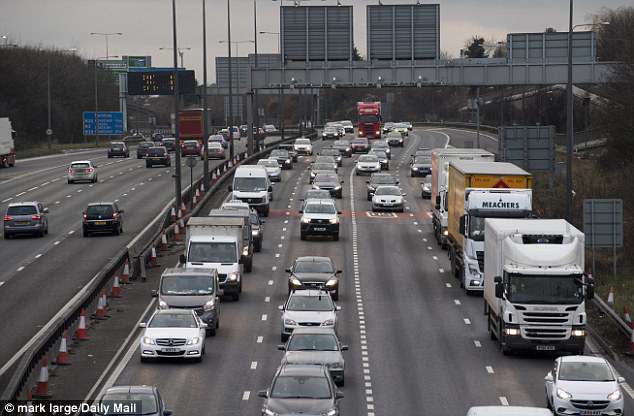 As millions of motorists prepare for the Easter getaway, Transport Secretary Chris Grayling has written to competition watchdogs to ask for an investigation

The latest price data shows drivers pay on average nearly 18p more per litre for petrol and nearly 17p for diesel on the motorway compared to other petrol stations. That means filling up the average car with unleaded fuel costs around £10 more. Compared to cheaper supermarket fuel, the difference is nearer to £12.

One example uncovered by the AA revealed a Shell motorway service station on the M5 charging 138.9p per litre for unleaded, while the price at an Asda less than five miles away was 112.7p. This equates to a £14.41 difference when filling a typical 55-litre family car. 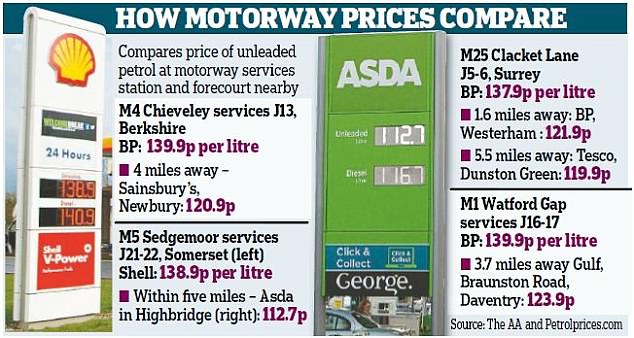 Mr Grayling told the Mail: ‘Drivers may feel exploited when they are faced with higher fuel prices on motorways.

‘I don’t want motorists chancing it and risking running out of fuel – putting their lives and others’ at risk. That’s why I’m calling for an investigation into motorway fuel prices, so I can be sure drivers are getting a fair deal.’

Surveys suggest one in five drivers put in just enough fuel ‘to get by’ on the motorway and wait for a cheaper alternative later.

This week drivers were paying an average of 137.8p per litre for petrol and 139.4p for diesel on motorways. The UK average across all petrol stations is 120.1p and 122.8p respectively while average supermarket prices are 116.7p and 119.4p.

In his letter to the Competition and Markets Authority, Mr Grayling said the problem is getting worse. Five years ago motorway prices were 7.5p per litre higher for petrol and 8.3p for diesel. That now stands at around 18p and 17p respectively.

Motorway service stations claim they have to charge more due to the cost of building forecourts and running a 24/7 operation. But Mr Grayling argued that the different prices were ‘not fully explained and I want to be sure that drivers are getting a fair deal.’ 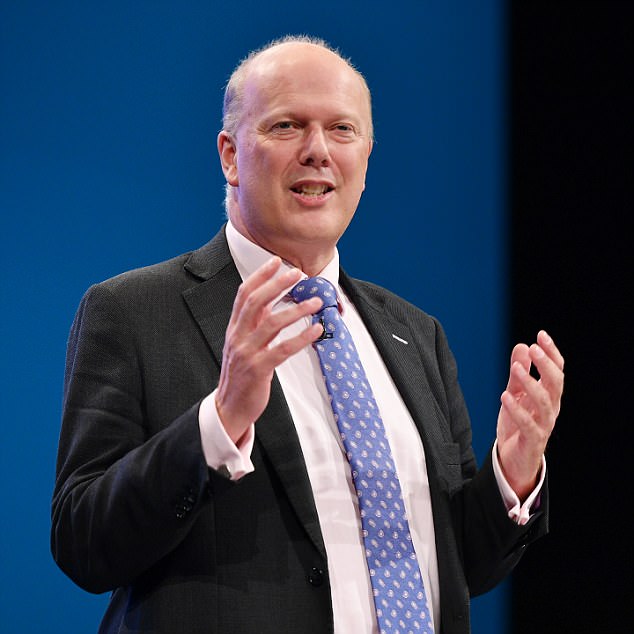 He wrote: ‘I am concerned that prices which are much higher than other forecourts may exploit users in a situation where there is less choice, and discourage motorists from stopping and refuelling when, for safety reasons, they should. Competition and choice should drive good service and fair prices for drivers. I am concerned that this market is not producing that outcome.’

He said there are three major companies responsible for nearly all the 112 motorway service areas in the UK – Moto, Roadchef and Welcome Break.

‘I would welcome a view from the CMA on whether the three private companies that currently operate the majority of motorway service areas are exercising market power to the detriment of motorists,’ he added.

Motoring groups last night welcomed the move. Luke Bosdet of the AA said it was understandable that motorway fuel are more expensive because of the extra costs but he described the almost 20p difference as ‘ridiculous and a clear rip-off’.

A spokesman for the RAC said: ‘This is great news for motorists and can’t come soon enough. There’s nothing to justify the sky-high price.’