The Transport Select Committee has launched a new inquiry into the funding and governance of roads in England in a bid to speed up repairs and resurfacing of pothole-riddled routes.

Announcing the new investigations, MPs said the plague of potholes ‘represents a major headache for all of us’ and vowed to examine the current funding constraints that have seen local roads fall into a state of disrepair.

The committee’s announcement sited recent research by the Asphalt Industry Alliance (AIA), which claims that local roads are resurfaced every 92 years on average – and unclassified roads retarmaced once in every 132 years. 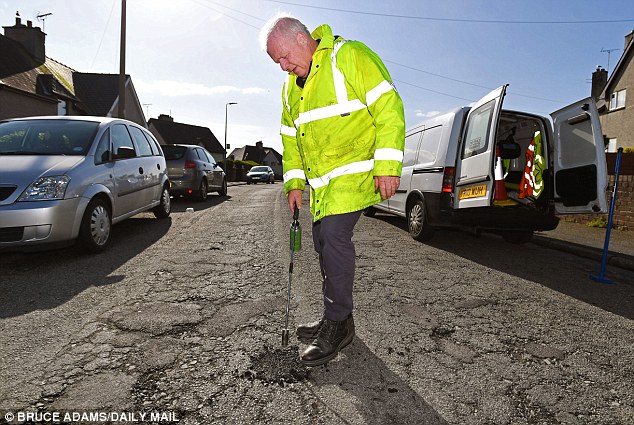 Local road inquiry: The Transport Select Committee has launched a new investigation into the poor state of English roads

According to the AIA’s Alarm survey, all roads would ideally be resurfaced every 10 to 20 years in order to maintain an appropriate level of grip for road safety and guard against water ingress and freeze-thaw effects that result in potholes.

But with its report suggesting that it can take councils up to 13 times that, MPs have launched a parliamentary investigation into why this has become the case – something that has received widespread backing from the industry and motorists alike.

It comes at a time when UK roads have fallen into what the committee has called an ‘extreme state of disrepair’.

This has caused financial and physical burdens for motorists and cyclists in recent years, with the frequency of pothole-related vehicle damage, breakdowns and injuries to bikers at an all-time high.

The RAC said it attended a record volume of breakdowns caused by potholes between April and June this year – 4,091 in total – and charity Cycling UK confirmed 22 known deaths and 368 serious injuries to cyclists on English roads since 2007.

Chair of the Transport Committee, Lilian Greenwood MP, said the consequences of a deteriorating local road network are significant – undermining local economic performance, resulting in direct costs to motorists and compromising the safety of road users.

‘Our inquiry aims to investigate the situation in England, including current funding constraints and potential alternative models that could offer a solution,’ she said in a statement.

‘We know that this is a high priority issue among the public and I hope our inquiry will help put the onus on the Government to address it sooner rather than later.’ 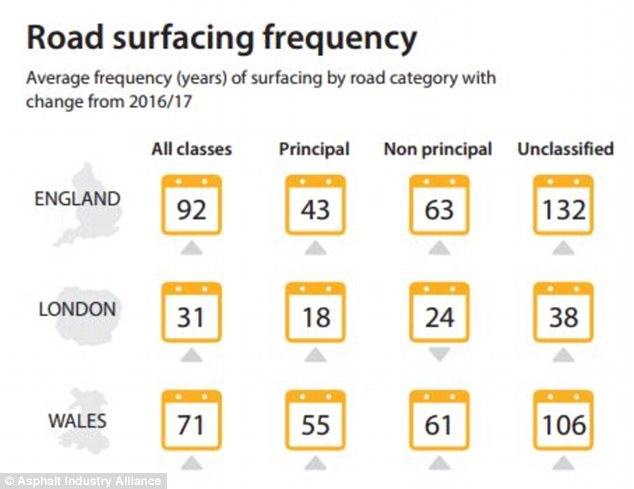 The AIA said the average local road in England is resurfaced every 92 years on average. It recommends a fresh layer of tarmac every 10 to 20 years in order to maintain safety levels 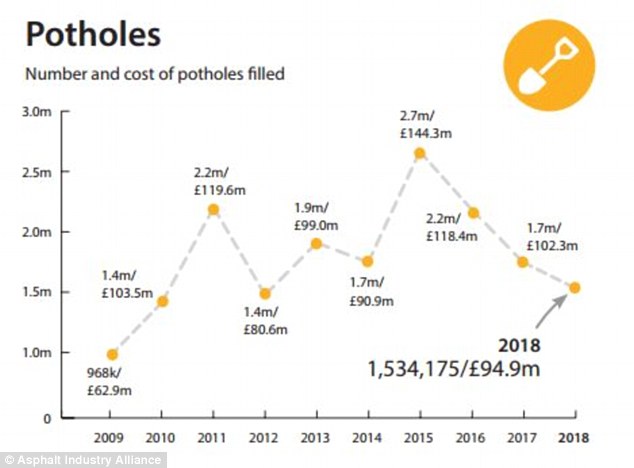 Pothole repairs on local roads have been in decline in recent year, and the funds spent filling them is at the lowest it’s been since 2013

The AIA confirmed that since 2015, the number of potholes filled each year has been steadily declining.

It calculated that 1.5 million potholes are filled on British roads each year, with one repaired every 21 seconds in England and Wales.

However, it survey of authorities stated: ‘The disparity in cost between filling potholes as part of a planned programme of carriageway repairs and as a reactive repair is again apparent.

‘Taking an average cost for filling a pothole across each region, the total amount spent in England and Wales is estimated at £94.9 million, the lowest figure reported since 2014.’

Edmund King, AA president responded the news of an inquiry, saying; ‘We are pleased that the select committee has heeded our calls for an investigation into the matter.

‘Most journeys start and end on local roads and their condition has deteriorated at a shocking rate.

‘Nine out of 10 (88 per cent) drivers say roads are in a worse state now compared to a decade ago.’ 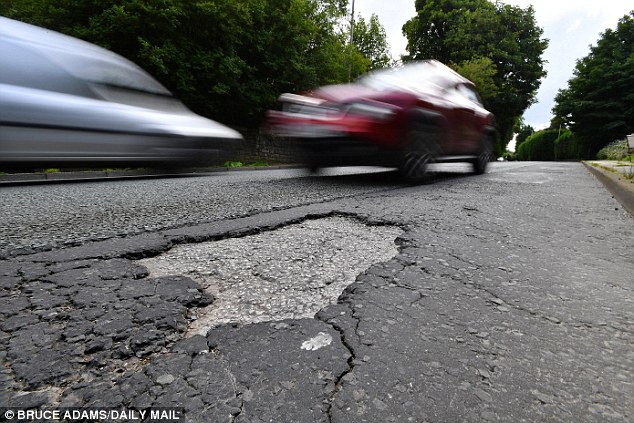 He added that AA patrols are inundated with pothole-related calls, and that insurers are feeling the strain of claims against tyre, wheel and suspension damage caused by deep road craters.

‘Councils are crying out for more funding to maintain their most valuable infrastructure, and we hope this inquiry highlights the need for a significant and sustained investment strategy,’ he said.

RAC chief engineer David Bizley added: ‘By 2020, major roads – motorways and major A roads – will benefit from ring-fenced funds as a result of the ring-fencing of vehicle excise duty for this purpose.

‘It is vitally important, both in terms of keeping communities connected and for the long-term economic health of the country, that local roads are given similar priority.

‘The current approach with inadequate central funding topped up by emergency funding for ‘pothole filling’ on a regular basis, is not sustainable.

‘We need the same long term strategic approach to fixing local roads that the government has implemented for maintain and developing the strategic road network.’