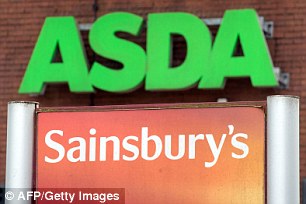 Sainsbury’s £12billion merger with Asda is under scrutiny after two parliamentary committees raised concerns over the impact on shop prices and suppliers.

The chairs of Parliament’s business and environment committees have written to the Competition and Markets Authority (CMA), urging it to consider issues of market dominance and whether it will create local monopolies.

A merger between the duo – the UK’s number two and three supermarkets – will create a chain bigger than Tesco with revenues of £51billion and 2,800 stores.

Neil Parish MP, chair of the environment committee, said: ‘I am concerned that with two supermarkets [Tesco and the merged grocer] taking up around 60 per cent of the market, suppliers would be more reluctant to raise complaints about unfair practices.’

Business committee chair Rachel Reeves MP said: ‘The CMA needs to be a champion of consumers and must look closely at the impact of this merger on the supply chain as well as the effect on competition.’

The CMA has said that it is likely to probe the deal, which has already sparked concerns over pensions and store disposals.