Financial consultant Tom Patrick got the shock of his life this month when he was woken early one morning by the police ringing his doorbell.

They told him his car had been badly damaged in a hit and run accident half an hour earlier while it was parked outside his flat. The offending driver had fled the scene, though he had left his own wrecked vehicle behind.

Unsettling as the incident was, no one had been hurt and Tom was relaxed because he knew the accident was not his fault as he had been safely tucked up in bed. 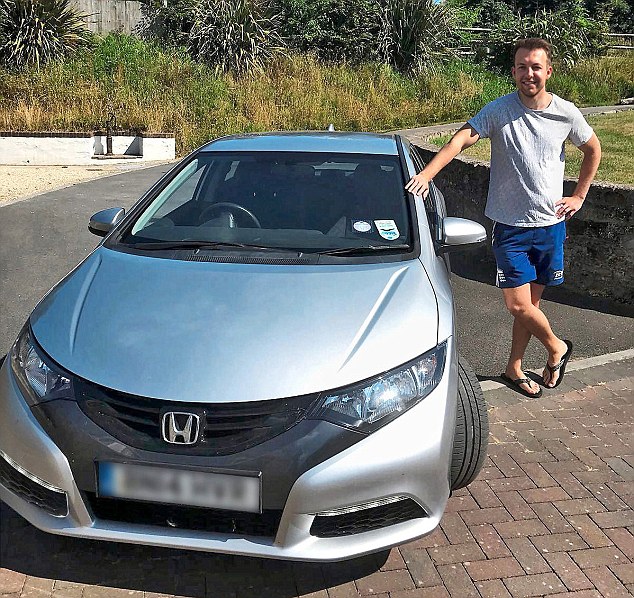 Shock: Tom Patrick was penalised when a driver ran away after smashing into his parked car

But he was to get a second rude awakening. As most innocent victims of hit and run drivers discover, he was ‘rewarded’ with a sharp rise in his annual motor insurance premium.

It is one of the stark injustices of the insurance industry that blame-free victims pay the price of a prang in this way. Even if they do not claim, perhaps because damage is minor, their premiums still rise.

When Tom, who lives in Battersea, South West London, contacted his insurer Admiral to arrange repairs, he was told he would have to pay the garage £850 – the excess he had agreed when he took out the policy. An excess is the sum a driver must pay towards any claim. Tom, 25, says: ‘It was obvious the incident was not my fault so I was surprised to have to pay the excess.’

But more financial pain was to come. Just a fortnight before the episode he had received a renewal quote from Admiral because his annual cover was due to expire on July 14. The new premium had come in at an acceptable £708.

But after the hit and run Admiral’s quotations department contacted Tom again to inform him that his no-claims bonus – which he had built up over four years – was lost and his new premium would be bumped up to £1,125.

Tom says: ‘I could not believe it – how unfair that I should be punished so harshly for someone else’s mistake.’

When The Mail on Sunday contacted Admiral on Tom’s behalf, the insurer said it recognised the timing was unfortunate with both an excess for the repairs and a higher premium to meet. It added: ‘We are currently chasing the other driver’s insurer for a response and will pursue them for our outlay for the claim. This would normally include the customer’s excess. But due to the circumstances of the claim and as a goodwill gesture we will now waive the excess and allow his no- claims bonus to stand.’

Despite Tom’s no-claims bonus being reinstated, the refreshed renewal premium offered was 12 per cent higher than the original quote at £793 rather than £708. 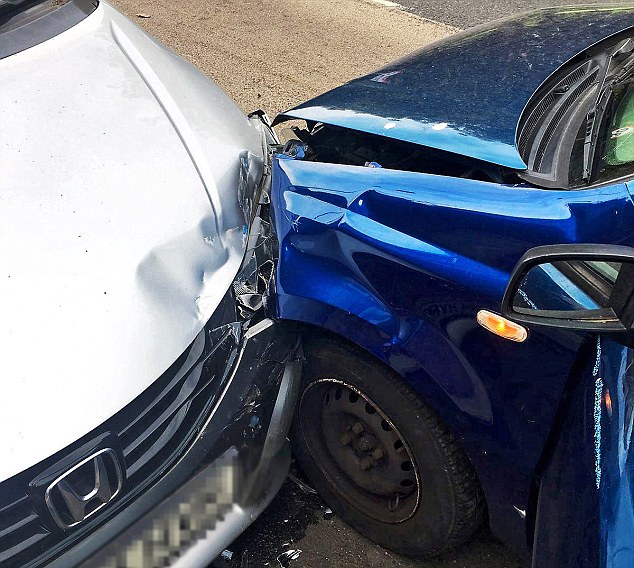 Vanishing act: The offending driver had fled the scene, though he had left his own wrecked vehicle behind

Admiral says: ‘Non-fault incidents are something we consider when calculating a renewal premium.’

It argues that those with a non-fault claim in the previous year go on to have 30 per cent more claims than customers without – suggesting they have higher than average exposure to everyday driving risks such as driving in the rush hour or accident black spots.

This type of sneaky premium increase is common practice in the industry – with innocent drivers punished for others’ poor driving.

The Mail on Sunday has long pressed insurers to take a fairer stance on unreasonable surcharges.

James Daley, of consumer group FairerFinance, says: ‘From October the insurance distribution directive says companies will have to act in their customers’ best interest. Let’s hope things change for the better.’

HOW TO MANAGE COSTS

Drivers who are a victim of a motoring incident just before they renew their policy can struggle to meet the unexpected extra costs. Like Tom, they are faced not only with an excess to pay, but also two increases to their premium because of the lost no-claims bonus and the ‘enhanced’ premium. This can put a severe dent in their wallet.

Graeme Trudgill, of the British Insurance Brokers’ Association, says the payment of an excess can sometimes be a temporary nuisance. He says: ‘The insurer will often try to get the excess back at the same time as recovering its own costs. If it is successful, they usually refund the policyholder. 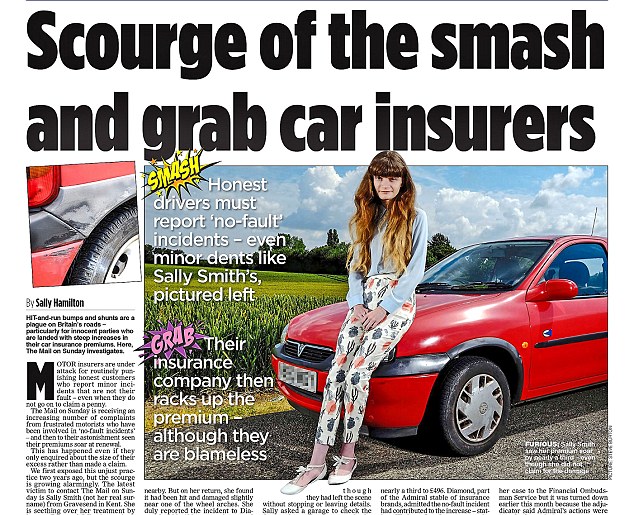 Flashback: How we previously covered the treatment of victims of so-called ‘no-fault’ accidents

‘If it turns out the fault is the other party’s, then any no-claims bonus will probably be reinstated and the insurer should recalculate the premium.’

If the excess is not repaid, policyholders who have legal expenses cover as part of their motor policy can arrange for lawyers to chase the culprit driver’s insurer.

Even with a claim pending it can make sense to compare the cost of cover elsewhere at renewal as many insurers accept customers mid-claim.

Trudgill says: ‘If you change insurer keep the new provider updated about the claim so it can recalculate your premium if you are found not to have been at fault.’

Drivers tempted not to report incidents to insurers and arrange repairs themselves can be in for a shock because some companies will respond by invalidating cover.

Incidents can come to insurers’ attention if the third party involved decides to make a claim against you – perhaps for whiplash.

If money is tight, monthly payments can help spread the cost of motor insurance. But the price will be higher overall than if you pay a one-off lump sum for the year, as the insurer is effectively providing cover without you paying the full cost immediately.

FOUR WAYS TO KEEP PRICES DOWN ON RENEWAL

1) Consider pre-empting a nasty premium increase by protecting your no-claims discount. This adds between 5 and 10 per cent to the premium, but means your no-claims bonus is secure when it comes to non-fault claims – and even a some at-fault claims.

2) Opt for a higher excess. But be sure you have funds at hand to pay this contribution towards repair bills in the event of a claim.

3) Put a second named driver such as a partner or parent on your policy.

4) Try telematics insurance. Installing a ‘black box’ lets an insurer monitor your driving habits and – if it likes the look of what is being recorded – cut your premium.