Nationwide boss defends his £2.3m pay packet – saying it is less than many blue-chip bosses earn

The chief executive of Nationwide has defended his £2.3m pay packet – saying it is less than many blue-chip firms’ bosses earn. 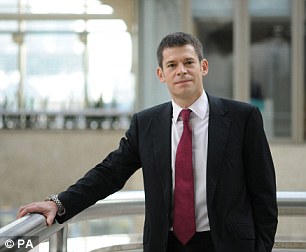 He was handed perks such as health insurance and a car allowance worth £217,000, giving him a higher benefits package in the past two years than chiefs of huge banks such as Lloyds and Standard Chartered.

As the building society revealed a rise in mortgage lending and savers’ deposits, Garner said his pay was similar to a mid-ranking FTSE 100 boss, and Nationwide was a major tax contributor.

He said: ‘Nationwide is the 11th-highest taxpayer of all UK firms.’

It came as the mutual revealed mortgage lending of £8.4billion for the three months to June 30, up 3.7 per cent on a year earlier, with a record 20,600 first-time buyers.

Deposits climbed £4.2billion higher thanks to high demand for Isa savings accounts, up from growth of £1.3billion a year earlier.

But profits slipped 12.7 per cent to £281m, largely because the previous year’s results had included a £26m one-off gain for selling its stake in payments firm Vocalink.

Garner said consumer spending is holding up, despite a squeeze on incomes after inflation was pushed up by the fall in the pound.

But he added the lender has seen changes in spending habits, such as shoppers visiting discount supermarkets for staple goods.