NatWest has sweetened the deal for current account switchers with a £100 cash carrot if you move to the bank before 15 June.

The new sign-up perk means those with one of its popular Reward Accounts could earn an average £183 from their account in the first year, more than some rivals.

The deal is also available to some existing customers (see below).

It follows a string of incentives launched by the bank this year, including the recent announcement that some of its customers won’t have to pay extra fees to use their debit card abroad this summer. 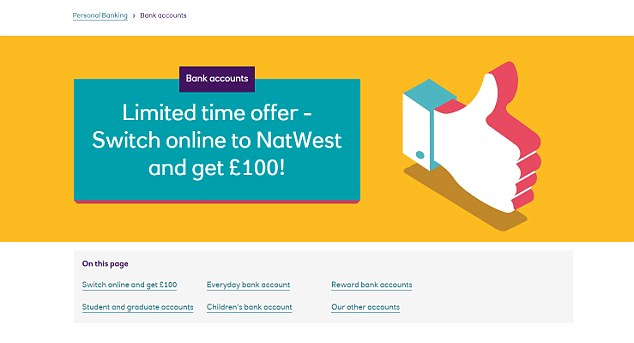 It’s back: NatWest is offering customers £100 cash to switch, so should you?

These eye-catching incentives come after some disappointing figures for the bank last year. Recently released stats from Bacs showed that in the third quarter of 2017 the bank had lost 16,583 customers – more than any other bank.

No doubt in response, the bank has also since trialled a recommend-a-friend bonus for some customers, offering up to £500 if friends and family sign up.

But should its latest sign-up bonus be enough to tempt you? We take a closer look.

To get your hands on the cash switchers must apply for one of the bank’s accounts online before 15 June and use the current account switch service (CASS) to move direct debits and balances over from an old account.

These include the Select, Reward, Reward Silver, Reward Platinum and Reward Black accounts.

You will need to deposit at least £1,500 into the account and log in online or through mobile banking before 13 July.

The cash will then be paid into your account by 10 August. 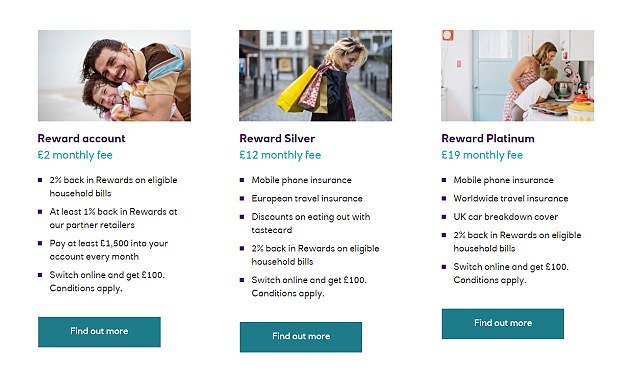 Rewarding? NatWest has a range of accounts under its ‘Reward’ umbrella offering monthly cashback on bills

What about existing customers?

Its website says it requires using the CASS to switch from another bank into your existing one. This in essence means being able to move over a balance and any payments to your existing NatWest account, and closing your other account.

Their aim being that in doing so you make NatWest your primary bank.

Is it worth switching?

If you are just after the cash bonus, switchers can open the no-frills Select Account to get the £100 bonus.

Alternatively the popular Reward Account already pays 2 per cent cashback on household bills, which the bank claims earns the average customer £83 a year.

The average figure is based on spending £345 per month on seven different household bills but you can work out how much you would earn using the cashback calculator here.

One thing to watch out for, NatWest overdrafts can be expensive. It charges a £6 per month usage fee and 19.89 per cent interest on agreed borrowing and £8 per day for any unagreed amounts over a £10 buffer.

That said this is still a fairly decent incentive, particularly as it comes as cold hard cash paid into your account compared to the likes of First Direct which recently switched up its new customer deal.

First Direct withdrew its long-standing £125 cash perk to be replaced by a range of freebies including enticing tech such as Bose on-ear headphones and a Fitbit Charge HR or a £150 Expedia voucher.

First Direct has other reasons for us to recommend it: firstly its customer service record, which has earned the bank a handful of awards over the years; secondly, its £250 free overdraft.

M&S Bank offers marginally more than the value of the First Direct perks, with a possible £185 in vouchers in the first year – this comes in the form of a £125 gift card, and a £5 monthly top up. Again though, how valuable this is to you will really depend on how often you shop with M&S, but it does also come with a decent £100 free overdraft buffer.

Another comparable deal is Halifax. It offers slightly less than all of the others with a £75 cash bonus. But this is paid the quickest, taking just a week to land in your account. Its Reward Account also pays £3 per month in rewards, meaning over the first year you earn £111.