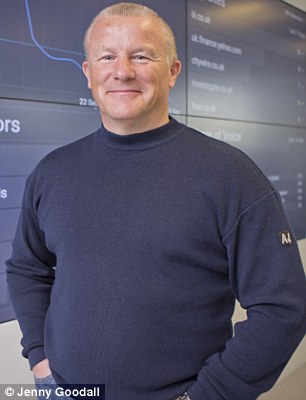 Stobart’s ex-boss Andrew Tinkler has been trying to oust its chairman Iain Ferguson and replace him with retail billionaire Philip Day.

All-out war erupted on Thursday night when Tinkler was fired from the board amid accusations that dragged in Woodford.

Woodford has been one of the largest shareholders in Stobart Group, with his Woodford Investment Management holding 20.4 per cent, for more than a decade, and has been backing Tinkler.

He has so far stayed silent as to why, but spoke out last night, describing Tinkler as an honourable straight talker, and questioning his opponents’ motives.

He said: ‘Sadly, the board has seemed determined to make this a public discussion and has wasted shareholder funds by employing lawyers that have made unfounded and ludicrous allegations against me and other parties.

‘Throughout my time as a Stobart Group shareholder, I have been able to observe Andrew Tinkler as a senior executive.

‘It is his creative and entrepreneurial leadership that has delivered shareholder value for Stobart Group.

He is an unconventional, straight talking, honourable man. My considered view is that the Stobart Board now needs a new chairman to restore stability and to ensure that shareholder value creation continues in the manner that we have become accustomed to over the past decade or more.’

Woodford said he believed Day would be a strong and effective leader.

Yesterday Stobart Group said it was launching High Court proceedings against Tinkler for damages for breach of contract and duties to shareholders.

The row looks set to escalate ahead of the company’s AGM in July.