Lloyds Bank has been branded a ‘dark force’ run by liars in an extraordinary attack by Noel Edmonds at its annual meeting.

The TV star accused chairman Baron Norman Blackwell of failing victims of a massive fraud a decade ago – and then seeking to cover up the crime.

The furious banker tried to shut the Deal or No Deal host up, saying: ‘This isn’t a show Mr Edmonds, this is an AGM and I would ask you to come to your question.’ 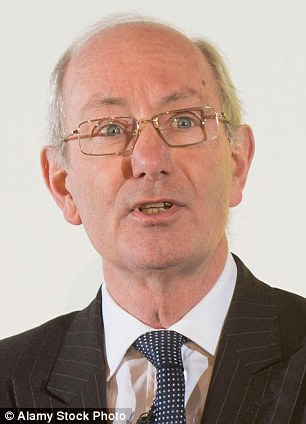 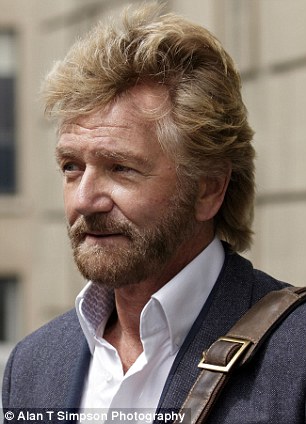 TV star Noel Edmonds, right, accused Lloyds’s chairman Baron Norman Blackwell, left, of failing victims of a massive fraud a decade ago – and then seeking to cover up the crime

It came as more than a fifth of investors voted against pay at the bank, in a large rebellion by City standards.

Advice group Institutional Shareholder Service had raised concerns over chief executive Antonio Horta-Osorio’s earnings of £6.42million for 2017 – 100 times those of the average Lloyds employee wage – and said the bonus scheme is over-complicated.

Blackwell said the board was disappointed by the vote and would reflect on what it could do to appease shareholders.

At a stormy gathering in Edinburgh, shareholders heckled the board with shouts of ‘resign’ just minutes into the meeting.

Edmonds, 69, launched his tirade over a £1billion fraud at the Reading branch of HBOS, which was later bought by Lloyds, where criminal bankers wrecked dozens of family businesses and spent the profits on prostitutes, holidays and luxury goods.

The bankers were jailed for a combined 47 years in 2017. Edmonds is suing over claims HBOS wrecked his business.

He said Lloyds knew what had happened and obstructed police, which the bank denies.

He said: ‘You’ve boasted Lloyds enjoyed a landmark year. Some would say it’s actually been a skid mark year.

‘You’ve permitted the corporate image of a once-proud bank to be completely tarnished. The black horse has become a symbol of the dark force in British banking.’

Last month, the National Crime Agency revealed it could launch a new investigation into what happened at Reading.

Lloyds has set up compensation schemes and an internal probe, but many victims have questioned the independence of those involved.

Edmonds said: ‘Norman, old boy, I tell you, even the Kray twins and Al Capone didn’t have this amount of investigations.’

Some of those who lost their homes, livelihoods and marriages claim Lloyds kept key facts secret and sought to bully them into silence.

One couple, Paul and Nikki Turner, faced 22 separate attempts to evict them from their Cambridgeshire home by Lloyds and HBOS as they sought to uncover the truth.

‘This is why you’re in this mess – Britain has got challenges, but at the foundation we like honesty and we don’t like liars.’

Lloyds, Horta-Osorio and Blackwell all insist they never lied. The chairman said: ‘We have a different version of events, we do not agree.’

He said Lloyds was prepared to let a judge rule on its disagreement with Edmonds.